Greetings IACD Spring 2013. My name is Andy Biar; I’m a junior in the BCSA program studying Computer Science and Music Technology. I drool over the possibilities of other people using my software, and I’m fascinated by creative applications that music can provide. I also play the cello, so if you’re ever in need of a cellist hit me up!

Most of my projects have been group projects, but I do have one solo project which I consider to be of some merit, a small point-and-click game called Autumn Skyline. Based on the title, you may expect to see some beautiful autumn trees, but instead the game opens up to a scene of skyscrapers with autumn-colored windows: (Although this is not the opening scene exactly)… 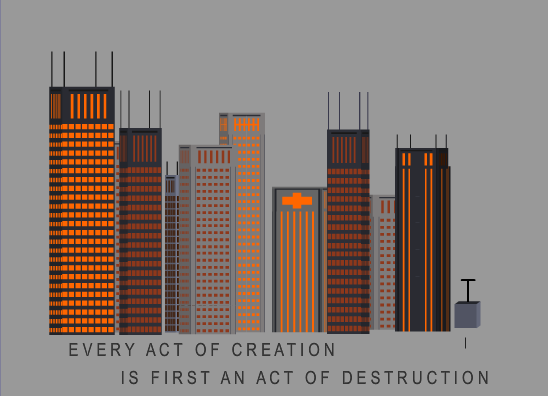 In Autumn Skyline, the player watches as a city is built from the ground up, and is then set with the task of destroying the city by a series of tasks. The text which accompanies the most dramatic decision in the game is a Picasso quote, “Every act of creation is first an act of destruction.” When the player finally destroys the city, a tree grows up out of the rubble, leaving the player to question their role as destroyer when only through destruction could natural flora be again created in the city.