I am Andrew Bueno, a BCSA Junior originally from New Jersey. I enjoy the act of storytelling, with most of my work in some way at least tangentially related to it. I love to work with code and the moving image. Outside of the “art world,” I enjoy performing on stage – I’m a member of CMU’s improv comedy troupe the No Parking Players and of Scotch ‘n’ Soda theater.

Last semester, as part of Paolo Pedercini’s Experimental Game Design studio, Eric Mackie and I created a game called Stranger using GameMaker 8. My contribution to the project was the entire code behind the game, and the integration of art assets provided by Eric into a finished product. This is actually one of only a few collaborations on an art project I have ever done at CMU. 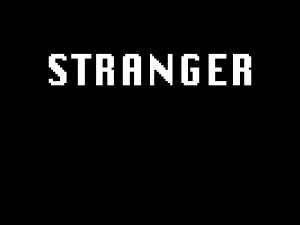 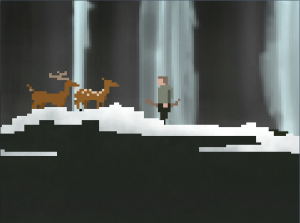 A few more screenshots of the game can be found here: 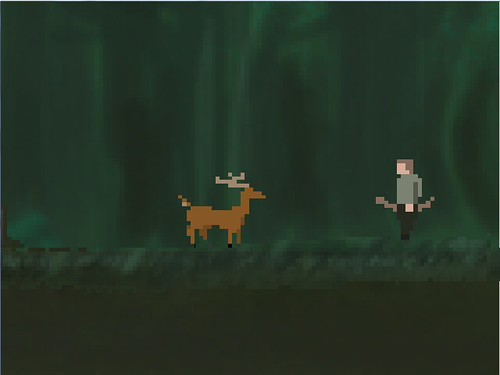 At this time I have yet to record video of the game.

Stranger is, at its core, a game about choice. The character you control, a hunter armed with a bow, is given no characterization of his own beyond your actions, which consist entirely of conversing with other characters or choosing to kill them (we made sure that in several cases, there might be an ethical motivation to do so on the player’s part).

The player walks through a forest, mountains, a gorge, and crumbling ruins over three seasons. The effects of the player’s actions are shown in the landscape and the current inhabitants of the area. For example, should the player kill a slaver whipping a slave line along in the gorge in spring, the freed slaves can be found making camp there in the fall. Should the player do nothing, the slaves and slaver are found in the fall at the ruins, where they are building a castle for a nobleman.

The project was a success in that it keeps track of a rather massive amount of possible game  states based on player choice. We did a good job keeping track of what seemed to be initially a rather simple choice tree (which ended up more like a choice explosion). This craziness was disguised to the player, who was given only the essentials in terms of controls.The ambiance and atmosphere of the game is a wonderful combination of haunting and beautiful.

That said, failure for me lied in the technique of the coding itself. It’s an example of a problem I have often in coding – workflow and code organization. Ultimately, choices were processed with a massive amount of if-else statements in game maker. It seems rather primitive and I’m hoping in the future to code with more finesse. There are still various visual bugs that need to be addressed, mostly due to the desire for correct choice processing over anything else. Overall though, it was an enjoyable project.