I’ll begin with the work I was impressed by: OutRun, made in 2011 by Garnet Hertz.

Hertz essentially took an old OutRun arcade cabinet and modified it so that it became a small electric vehicle in its own right. Custom computer vision software analyzes the road lying in front of the vehicle (as recorded by front-mounted cameras) and constructs an analogous image of it using the game’s sprite set. The virtual road is displayed on the “windshield” in real time.

Mainstream video game designers strive for realism, but this effort seems to end up concentrated specifically on games’ graphics. Hertz de-simulates OutRun’s essential gameplay component – the driving, bringing the game onto the mean streets of the real world. Simultaneously, he subverts the effect by forcing the driver’s focus to a relatively small amount of visual data. The “gameified” model of the world is the driver’s sole navigational tool. With our own GPS systems, how different is our own experience driving?

It’s nice to see a project that has a sense of humor (16-bit go-karting!) that, as an experiment in augmented reality, can provide useful data for other future research in the field.

Now, the work I was surprised by: Ice Angel, by Dominic Harris and Cinimod Studio. 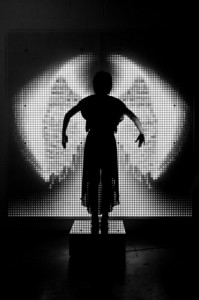 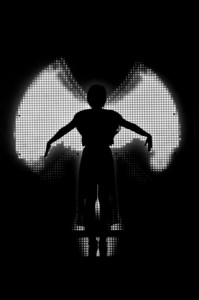 This work is just as much a performance as it is an installation, with one viewer at a time taking the role of actor. As a participant stands on a mirrored pedestal and moves his or her arms, an array of 6,500 LEDs behind the pedestal generates a pair of wings which match the movements in an impressively natural manner. The camera used to capture user movement data is placed diagonally above the performer, making coding the installation more complex, but ensuring no jarring disruption of the scene by the recording device.

Though I would contend that the conceptual underpinning of the work is somewhat weak, I was surprised by two aspects of the installation. For one thing, its requirement of audience participation that is performative rather than cooperative is something I don’t see enough of. Perhaps more importantly, the installation records performers’ biometric data, thereby “remembering” the wings unique to them should they mount the pedestal again. Where many generative New Media artworks focus on the ephemeral experience, this work has a sense of permanence.

Finally, a work I feel could use improvement: The Pyramid series, by Dev Harlan.

Harlan projection maps intricate and ever-changing patterns onto pyramidal surfaces.The video he projects emphasizes, complicates, and is limited by these simple geometric surfaces. Harlan’s clean aesthetic makes for some colorful, interesting monolithic installations. Despite this, I feel that he isn’t pushing his work to its full potential.

I feel Harlan’s expert manipulation of geometry in two dimensions could translate just as well into three dimensions. Imagine projection mapping on an installation that transforms and undulates. As it stands now, I find Pyramids stales rather quickly.