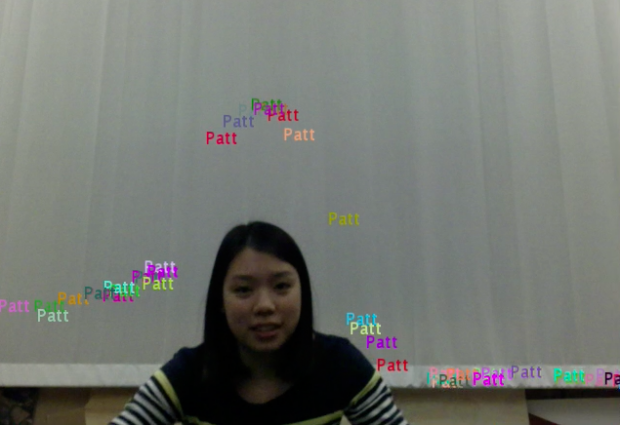 Here is my reimplementation of Text Rain by Camille Utterback and Romy Achituv. This is my first time working with Processing, and learning about object-oriented programming. I created a class called Letter that contains the object’s data and methods. Once I got the letters to fall, I then worked to connect the program to the webcam by importing a video library. The text rain program compares the brightness of the pixel of each letter to a threshold. If the brightness is more than the threshold, the letter rises up. If not, it falls down. 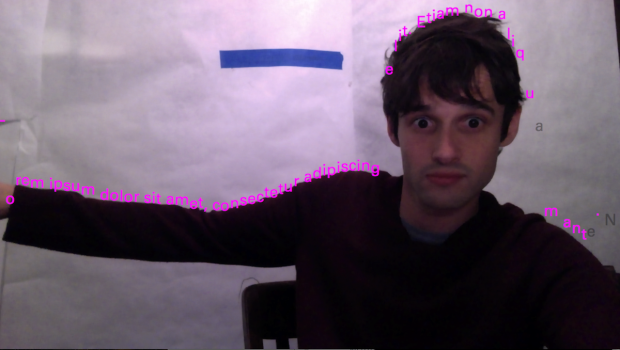 In my implementation of Textrain I read a string into an array of letter objects. Each object knows its character, xOffset, what column its in and where it is currently located vertically. Each object scans it’s column for the highest dark spot and then checks that against it’s current location. Thus, each object can make a determination about whether it should fall as normal or cling to the highest dark pixel.
A few details worth noting.

Textrain from john gruen on Vimeo.

Code is available at Github:https://github.com/johngruen/Textrain

I made this on my desktop mac mini, it doesn’t have a camera, so I used Kinect instead. The idea is the same. You can adjust the tilt using the arrow keys, and the threshold using “a” , “s” , “z” and “x” keys.

Firstly, I use the camera to capture the users’ video. And use the code to capture people’s outline and fill it with black shadow.

Then, I write a randomly falling down letters generator. It produces randomly letters in the random position in the top. The letters will fall down if it doesn’t meet the black shadow. 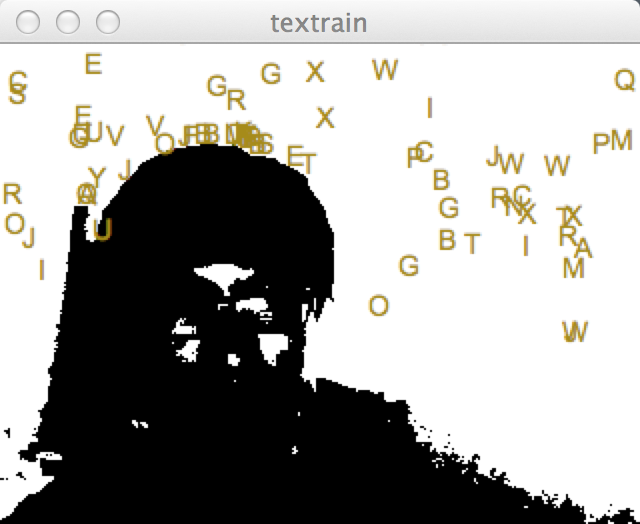 I look pretty pissed in this video – its probably due to inclement weather. 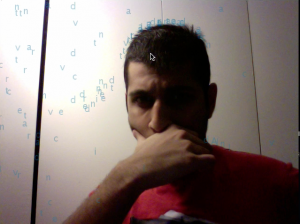 My implementation of Text Rain is fairly straightforward. The code is probably longer than needed for the simple effect, but I added some things, and wrote it because I thought this was something that could be made better in the future. One thing I really want to do is add awesome lightning effects that I can control with my hands.

Each droplet is an object with position variables and it’s derivatives. Every run through the draw loop, these are updated according to the preset numbers. Since I have acceleration in my droplets, it was important for me to limit the droplet speed using a terminal velocity. Finding these numbers was done by trial and error, and no doubt there is still room for improvement.

/* Droplets fall from the top of the screen and stop when they reach a certain threshold */
class Droplet{
//The character we are drawing
char c;
//The font size the droplet is being drawn
int size;
//The current position, velocity, and acceleration of the drop
float x, y, x_v, y_v, x_a, y_a;
//The starting position, velocity, and acceleration of the drop
int init_x, init_y, init_x_v, init_y_v, init_x_a, init_y_a;
//The width and height of the
int width, height;
//Terminal velocity for the droplet
//Change this value if you want it to snow instead
int terminal_v = 12;
//Whether this droplet is now snow
boolean isSnow;

By default droplets have an alpha value, and so, drops get darker when they are stacked. This made sense to me, since I think of the droplets as combining like they would in real life.

Aside from what Camille Utterback and Romy Achituv made, my implementation allows you to control the direction of the wind (using left and right keyboard) so that droplets move horizontally as well. Since it is winter, I also added a snow toggle (press shift), which can slow down the droplets. All of this is possible by simply setting the properties of all Droplet objects. 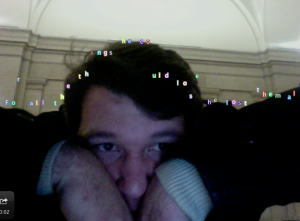 Originally by Camille Utterback and Romy Achituv, I was able to run “Text Rain” in Processing. It was my first time back to Processing in a while, but I was able to figure it out after some help and practice. I simple indexed the camera’s pixels and went about it the brightness() way. Fairly reliable and quite a lot of fun getting it going. I think a performance of my lip-singing my favorite song is in order for a finished piece.

Text Rain – Re Do from Nathan Trevino on Vimeo.

My code is here.

For this implementation of Textrain I made a Letter class and kept track of an array of Letter objects. Each character from the string is stored in this array and updated via for loop in the draw function. They detect the brightness of the pixel immediately beneath them and only drop if the pixel is bright. There is also a function that fades the letters from teal to navy blue over time. The string is the first line of the e.e. cummings poem ‘anyone lived in a pretty how town,’ which really doesn’t have any significance other than the fact that it’s great.

GitHub -> soon, having trouble with it currently…

This is a basic reimplementation of Text Rain by Camille Utterback and Romy Achituv.  The Processing code is relatively efficient as it extracts brightness values directly from the camera pixels that have already been written to the screen.  It also only examines pixels at the current location of the falling letters, rather than performing operations over the entire image.  As with most simple implementations, the app relies on a light-colored background to work properly.  The letters fall at a speed proportional to the brightness difference between the pixel and the light/dark threshold.  Below that threshold, the letters rise until finding a light region again, resulting in the apparent tendency of the letters to “ride” arms and other moving objects.  Additional techniques like background subtraction or true boundary detection could improve performance.

The Processing code can be found here. 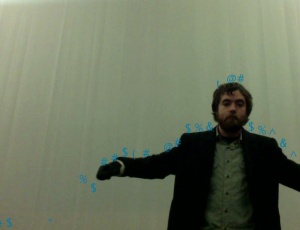 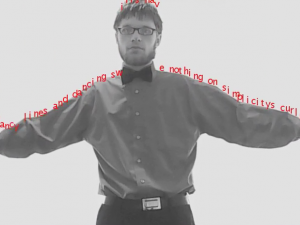 The program is really simple. I took a string of words, split them up using char and took those individual characters/letter and put them in an array. Then I made an array for the y position of each letter. The program just checks the y position of each letter as it falls and overlays that information with the pixel array of the video. If the y position of the letter is on a pixel in the video that is darker than a set threshold, then the speed of the letter reverses (which basically results in the letters seemingly staying in place when in between a dark and a light pixel, or between the background and an object).

“Listen as the bonds fall off, which hold you, above and below….”

So… hey there: AvR here, with a bucket of gatorade, a pile of saltines, and a bunch of code to share with you. Delightful!

This is my solution for recreating TextRain in Processing. In short, it knocks out the background by making everything two-toned, and then searches for the darker pixel color. Nothing super fancy, but fancy by my standards, because I’m not super fast at this yet…

I wanted to say a bit about the text itself. The lines are from Guillaume Apollinaire’s famous French calligram “Il Pleut” (It Rains). Calligrams are poems where the typographic layout and shape of the words contribute to the meaning of the poem. The original looks like this: 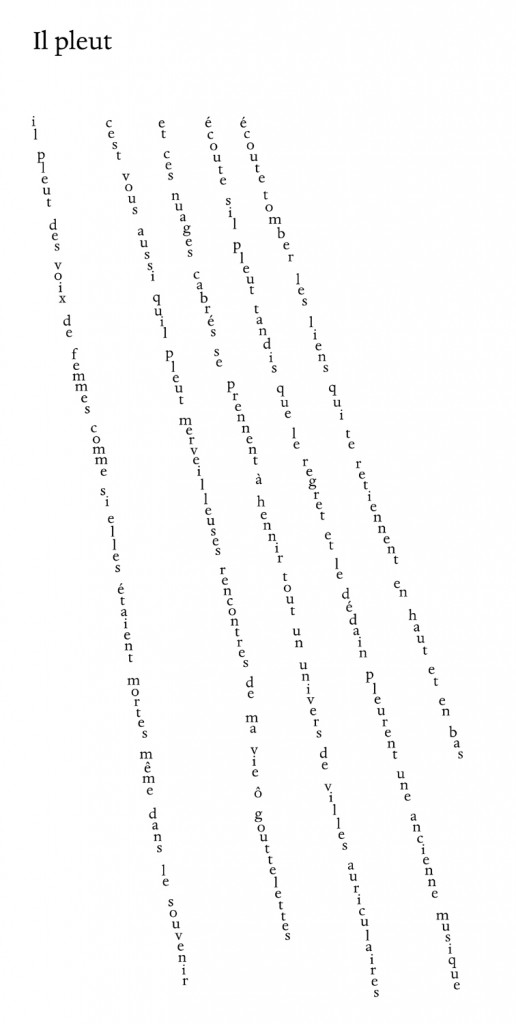 I’ve always loved the work of Apollinaire, and this assignment seemed like the perfect opportunity to breathe new life into his ideas. Obviously ‘Gui’ didn’t have a computer available to him, and he was forced to rely on static shapes to convey the idea of rain. I liked the idea of being able to add a little motion to the mix. The idea of ‘freeing’ the letters from their frozen position on the page, to me, fits nicely the final line of the poem: “Listen as the bonds fall off, which hold you, above and below….”

Credit where credit is due: I listened to John‘s suggestion to redraw the webcam image as a set of larger rectangles — not because it looked cool, but because it helped Processing deal with the ridiculous output of my retinabook. Mike also nudged me in the right direction about locating individual pixels to gauge brightness, because on my first attempt I’d written myself into a processing abyss with a whole pile of letter classes, and couldn’t figure out if I was the dimmest bulb in the chandelier, much less if a pixel was the dimmest pixel in the window……. 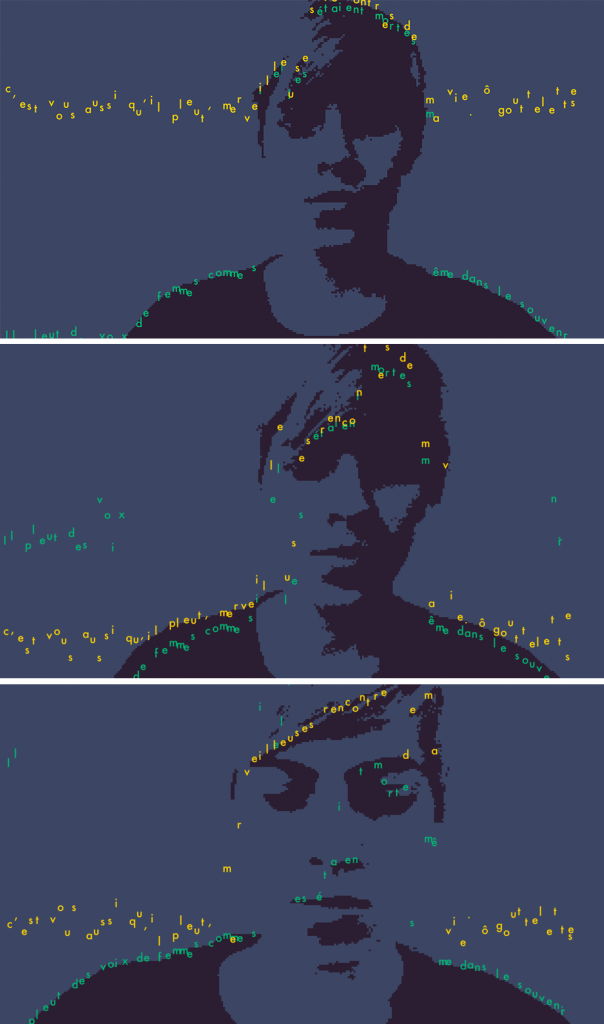