In this piece there is a long hallway of projected figures. A sensor is triggered when an audience member goes by and the figure approaches, appears to almost speak, and then retreats. 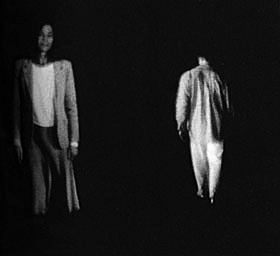 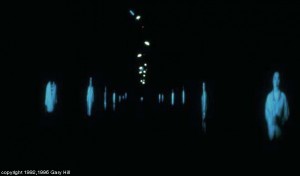 I like this piece because I think it conveys a simple poetic interaction un-jaded by skepticism and technological gimmick. I enjoy the fact that it was made using laserdisks and monitors with projection lenses. I like the human scale and direct address of the subject matter juxtaposed with the lack of physicality and dismissive gesture of each individual. I think it is particularly suited to the etherial medium of projection.

As an artistic context for this work I would like to reference Thecla Schiphorst’s Body Maps and Paul Sermon’s Telematic Dreaming.  Neither of these pieces are as successful as Gary Hill’s tall ships, but they are also steeped in the idealism of early interaction.

Oefner created a series of colorful photographs by injecting watercolor into ferrofluids (an awesome magnetically charged liquid). The resulting images are psychedelic images that resemble diffusion patterns found in nature. 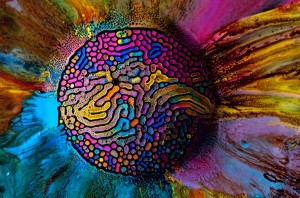 I find this project exciting because of it’s materiality and pseudo-science aesthetic. However the images are pure stimulation. The color palettes aren’t innovative, instead they are simply bright and harken back to the 70s. I would like to see this technique applied to a live sculpture rather than still photographs.

Oefner said he was inspired by the sculptures of Sachiko Kodama.

In this piece Roy makes a rube goldberg like machine that causes an elevator to be in an infinite loop, constantly travelling between each floor. Meanwhile a thermal printer in the elevator documents the lost energy of the elevator in a long continually growing strip stretching into a trash can bellow.

This piece doesn’t actually disappoint me. I like the way it is built on-top of preexisting mechanisms of the building and how it is constantly exerting itself over its futile task. I mentioned here more for its potential; I think there is a lot of potential to integrate the secret workings of preexisting structures into a kinetic piece.