Hi guys, I’m a senior pursuing a Bachelor’s of Computer Science and Art.  I’m most interested in working on art-related projects in the virtual spectrum, particularly games.  I don’t have so much formal training in human-computer interaction but I would love to gain more experience and knowledge in that arena.  In this class I hope to learn about a lot of new digital tools and am really excited to meet and work with new people who share some of my interests and bring totally new perspectives and ways of thinking to my attention. 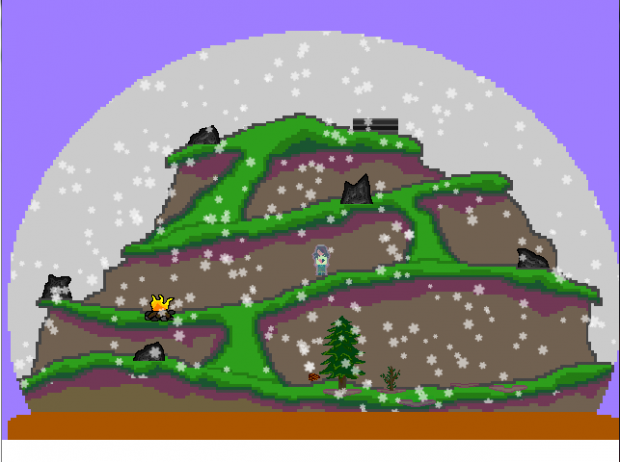 The above screen shot is from a game I created last semester for Paolo’s Experimental Game Design class.  The game’s icon is a tiny snow globe and the game itself is meant to sit on your desktop the same way that a snow globe would sit on your shelf.  However, unlike a normal snow globe which only allows you to shake and observe, Snow Globe (the game) gives you the opportunity to affect what goes on inside the snow globe.  At the beginning of the game, you control a girl that lives in the initial empty landscape within the snow globe.  Given that it is a snow globe, this is a very cold environment for her to be living in, so you need to build her some shelter in order to keep her alive.  The snow globe has a small ecosystem which you must learn and navigate in order to do so, namely involving picking up object to plant and cut down trees, build a fire, and build a permanent shelter.  However, there is a small catch: you can only see and pick up these objects when the snow has not settled over top of them.  Therefore, you must constantly shake the snow globe by closing and re-opening the game to continue the game.  The game will end in one of two ways, and once it does, you will no longer be able to play, you can simply observe (unless you restart the game).

I’m pretty happy with the way the game turned out; I think I succeeded in created a coherent world both in terms of the graphics and the ecosystem.  If I were to go back and improve upon it, I would focus mostly on timing and pacing; I was working on the game up to the last minute so I made decisions about these things based on guesses and didn’t have so much time to test them out.  I also might rework the tutorial somewhat, it’s a bit wordy.

If you’re interested in playing the game you can download it here: http://www.andrew.cmu.edu/user/elazrus/Games/SnowGlobe2/.  I’m using this site temporarily store some of my work online while I am working on my website so I made update this link in the near future.

You can also see a video working through the tutorial portion of the game here: