This project uses electronic paint rollers created by the artists to create the illusion of painting on walls. The custom software developed tracks the position of the rollers and digitally maps the images to project them onto walls. I really admire how this project merges digital art with the physical environment, using the painting metaphor to highlight the transience of the artwork. While it is expressive, it lacks the permanence typically associated with graffiti. I think it would be more effective if they projected more meaningful content, as graffiti art such as that of Banksy’s is typically aimed at producing some level of social commentary. This project emerged shortly after French designer Aissa Logerot developed “halo”, an LED light spray (http://www.designboom.com/technology/led-light-spray-halo-by-aissa-logerot/), to write messages much like that of graffiti artists.

In this interactive media installation, the artists project a fire-like visual onto a stretched sheet of spandex, allowing users to push against the screen and experience depth in their interaction with the digital glow. While simple in concept, this piece was surprisingly beautiful as it slows down an interaction and brings a level of reflection to the experience. I did enjoy how the music paired with the texture of the glow, but would have liked to see color used to set the mood as well. The artist, who draws inspiration from music and dance, created the project to be interacted with by dancer Kiori Kawai as part of a performance art piece.

“Because You Asked”
Alan Bigelow 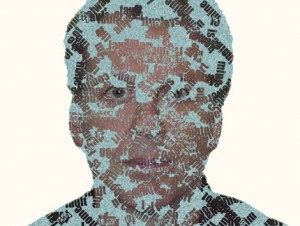 This interactive self-portrait piece allows users to click on a series of icons to activate sound and text that ultimately covers the image to reveal the portrait of the artist. After the text covers the image to reveal the portrait, the user can erase the image to reveal the words “Because you asked”. I think this project explores interesting topics of digital identity, but I found the interaction slightly disappointing and overly jarring. The icons lacked meaning for me and the text felt redundant as it was expressed through audio and visually. The process of erasing also seems fairly inorganic and slightly anti-climatic. The artist draws inspiration from digital stories and poetry by bringing together text, sound, and visuals digitally.