I’ve had the pleasure of seeing/performing through this piece several times. It consists of several hand decorated leads feeding back into a max patch (I think) measuring the overall resistance created as users hold hands/release their grasps. As circuits open and close, the characteristics of the sound evolve and expand.

In the performances i’ve seen, this results in a lot of relative strangers spontaneously grasping each other to create really lovely generative musical compositions. Make a Baby is a prime example of something that’s totally technology driven, but which totally obscures that technology in the interactions it facilitates. 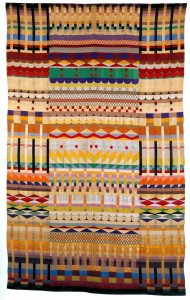 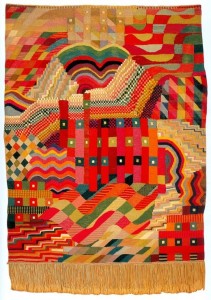 Stolzl produced  textiles in as a master craftsperson in the Dessau Bauhaus. Her textiles were created on Juaquard looms that use punch cards to encode weaving patterns.  I saw several of these at a MoMA exhibition a few years back and they surprised me because (a) they’re so obviously obscenely amazing and (b) they were largely made in the 1920s on  what are essentially massive proto-computing platforms 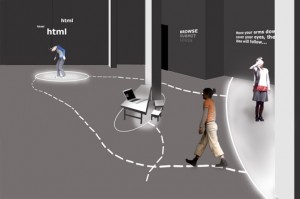 This piece is technically impressive and, on its face, seems like a really cool idea. HTML is pulled live of a page and interpreted by dancers whose movements are subsequently interpreted, and stored into a language of movement, and then re-interpreted (again!) by a second set of dancers. Additionally, sound is generated by mapping the characters of HTML tags into sonic elements (H-E-A-D, is given as an example).

For all its real-timeyness, this performance lacked any sense of urgency or immediacy. More importantly, by using HTML as a the driving tool Endlicher conveys nothing meaningful about Facebook as a system. Sure there are some handy bodily metaphors (head, body, link, span, etc) but HTML is merely an artifact of an end-user experience and is fundamentally not what’s interesting about Facebook as a network (which is what’s interesting about Facebook). Doing an HTML based interpretive dance for any site (cuteoverload.com for example)  would look just about the same.