I am really obsessed with corals, so this paper, and in general the research revolving around simulating coral morphogenesis (how corals grow) is my main focus for this class.  Corals are colonies of tiny polyps (like miniature sea-anemones).  Many corals have a photosynthesizing algae called Zooxanthellae living in their tissue.  Thus some corals “feed” in two ways: through photosynthesis and ingesting small organic matter.  Colonies of a signal species can form various morphologies depending on environmental conditions like light, flow, and nutrient availability.  Not only do corals exhibit this ‘morphological plasticity,’ it appears that the various forms they produce are adaptive.  This is pretty fascinating since there is no centralized organization: the polyps are all extraordinarily simple, yet there collective behavior is rather complex.  In this way they are similar to ant colonies and a multitude of other biological systems.

In order to understand these phenomena, a bunch of computational biologists have been modeling coral growth in massive computer simulations.  The video is the output of one of those simulations.  These guys are the main coral/sponge folks:

The simulations are pretty complex (involving lattice simulation of diffusion and mesh manipulation) but the basic idea is simple: each node of the mesh represents a polyp, each edge a connection between polyps, and the polyps grow normal to their neighbors at a rate proportional to the food concentration in a small neighborhood. Edges that are to small fuse, edges that are too large grow new polyps.

I want to copy this stuff, and then tweak it. It would be interesting to take these models and fiddle with them not to model nature precisely, but to still retain some fundamental abstraction of the natural system, while exaggerating various parameters.  The effect, I hope, would be a form or process that looks vaguely organic or familiar, yet is somehow bizarre and ‘incorrect.’

A Collision Based Model of Spiral Phyllotaxis 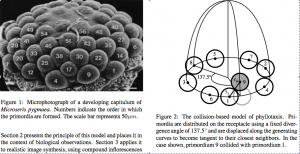 There are numerous theories about why plants form such regular (and beautiful) spirals around their longer axis.  This paper presents a model/system for understainding these spiral patters.  The basic idea is that as new organs develop, whether they be seeds or stems, they collide with their predecessors and are forced into spiral patterns.  Oddly enough (or perhaps not oddly at all) the spiral patterns exhibit some mathematical consistency   The number of spirals going in one direction and the number going in the opposite direction are often two consecutive values from the fibonacci sequence.  In addition the angle change between successive units is sometimes the golden angle (the golden angle is formed from the golden ratio, but wrapped onto a circle).  I find this idea, that the dynamic nature of plant development causes these patterns, fascinating in its simplicity and exciting from a modeling perspective.  A computational model could be constructed which relies primarily on the simulation of physical interactions (collisions, deformations, etc.) to generate organic forms and processes.  I imagine a program where each organ or seed is modeled as a little balloon of springs, which can coalesce, grow, and then shrivel (the timing would probably have to be non-physical, or in the “genes” of the system).  Each balloon would exert forces on its neighbors and perhaps be constrained to lie on a surface or retain a distance from a central axis.

A Confidence of Vertices

I couldn’t find any explanation of this project, but I assume it is a spring simulation with some external forces pulling on each cube.  I find it rather humorous and alien.  These large collections of springs look like they have intention and are extraordinarily massive.  Its neat that physical simulations allow for exaggerated behaviors that would be extremely rare in the real world (ideal springs that are extremely soft, or massive or in giant arrays).