For this project I’m really hoping to make a game for Android tablets/phones that utilizes the touch screen. I’m not sure if that’s too ambitious for the time we’re given but I feel like it’s an area I’m going to need to explore eventually.

My current idea, which I think is definitely too big for this assignment, is to make a wave-based (think Tower Defense / Plants vs Zombies) game wherein you play as a goblin warlock’s apprentice, and your job is to go clear out an old fort that’s infested with humans. Levels would be different rooms, and the waves would consist of different types of people (knights, knaves, whatever). As a warlock apprentice, you know some spells that you can cast onto the oncoming waves by drawing different symbols. 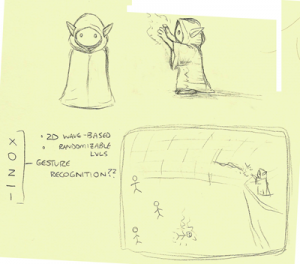 I have some other less time-consuming ideas that I might fall back on in the event I can’t get the barebones version of this running by the due date.