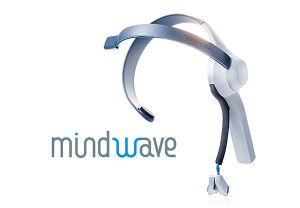 Now this is a cool idea. Thinkgear is a set of sensing hardware and software developed by Neurosky that can be used to take readings of the user’s mental activity. By extension, ofxThinkgear allows the user to connect a piece of Neurosky hardware to openFrameworks so that one can incorporate brain wave readings into a project.

The possible projects would be partially constrained by the available level of hardware–to my knowledge the practice of brainwave reading is stilla very inexact science–but even a simple neural interface would be an interesting input to work with. In fact, the main challenge beyond getting the technology to work would be to avoid making a piece that was only interesting for its novelty.

It could be interesting to develop a similar project to the projects that encourage their participants to stay very still–the user is subjected to a buzzing flurry of images and sounds until they relax their minds, at which point the surrounding environment becomes quiet and meditative. This could be accomplished by constructing an installation that simulates a busy, artificially sped-up area like a city that becomes calm and begins to reveal small secrets and treasures when one begins to relax. Another angle the project could take is that one can only progress and explore the area when their head is clear–otherwise all of the necessary details to move on become lost in the rush.

There are so many fun applications for a projector that I’m going to stick with listing potential setups rather than the specific projects that could be applied to each. A good base for a couple projects is a setup consisting of a projector, an open space, and a website that anyone passing by can contribute to. Mining internet data and projecting a representation real-time is another solid place to build from. It would also be a good way to share a performance piece or natural phenomenon across a large area–if combined with a GoPro one could share an experience like exploring a deserted city with a large, populated city for example. It would also be a good method for sharing an augmented reality with a large area–a projector on a spinning dias could sweep an area and change it as the light touches it.

There are plenty of ways for a projector to share an experience from far away. I’d love to explore a few of these ideas a bit more.

The multitouch screen is by this point a pretty solid technology that can be smoothly incorporated into most projects. I therefore think it would be most engaging to make projects with this kind of framework that serve only as an interface with a larger work. An iPad that controls a kinetic sculpture is one idea. A set of touch screens that each force their users to sacrifice parts of the project to conserve the whole is another. At this point I see this framework as a nice, smooth way for the users to interact with the piece but I’m sure given time I could find some more interesting uses for it.