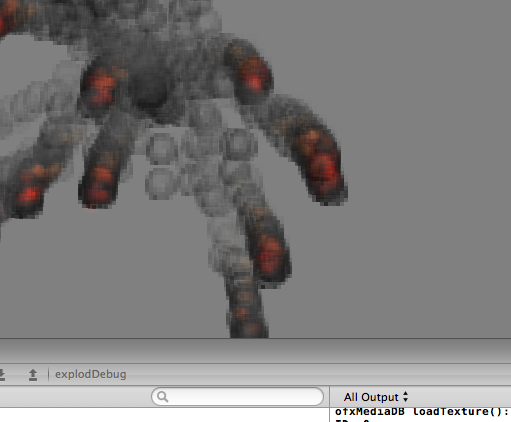 Author: Marlena Summary: Compiled combination of explosions and interfaces Abstract: An attempt to combine an explosions addon with an interface addon in openFrameworks. Repository: https://github.com/thisisanexparrot/ExplosionGradient

The sad tidings were that I wasn’t successful in achieving my goal. After having found these two libraries for generating explosions and for making a user interfaces, I had hoped to make a program that let the user change the size, color, number, and type of explosions using some sort of sliding method. I especially wanted to create a gauge that would let the user slide along a gradient of a violent explosion of fire and shrapnel to a beautiful explosion of abstract shapes and light. As this project stands, the two libraries seem to compile in the same project without any errors.

I think my main mistake was that I spent too much time trying to become acclimated to the new programming language and environment as opposed to just jumping in and seeing what would work. The result is that I am now a lot more familiar with the structure of openFrameworks in the context of Xcode but at the cost of the time that I could have spent hacking in C++. I’m also glad that I learned about openFrameworks–after spending time researching it and hunting through its vast collection of addons I’ve discovered that it’s a really cool platform with an active community that I’m looking forward to exploring more now that I have an idea of what it can do.