Author: Keqin Summary: A simple hand-held haptic device for Kinect Abstract: There are many haptic devices for CV or Kinect systems. However, most of them are expensive and complicated. Simple Haptic is a hand-held device for kinect with arduino and servo motor. Using a mechanism to give the feedback when user touches object in the simple 3D environment made by Kinect. By this user can really feel the object in the virtual world. Repository:

This is what I already made. The box with electric device and elements will be the power of the feedback force. It mainly consisted of  a 5V DC motor and a bunch of other electric elements. Such as H-bridge which is an electronic circuit that enables a voltage to be applied across a load in either direction. These circuits are often used in robotics and other applications to allow DC motors to run forwards and backwards. H bridges are available as integrated circuits, or can be built from discrete components. 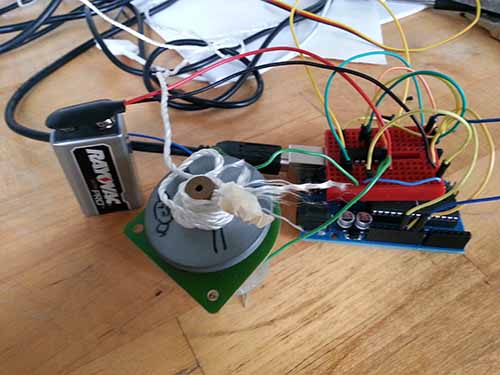 When the motor begin to rotate, it will drag the string. The string is connected to a board. And the board will give a force to users hand. This is the basic mechanism to form a simple haptic system for kinect of CV system. 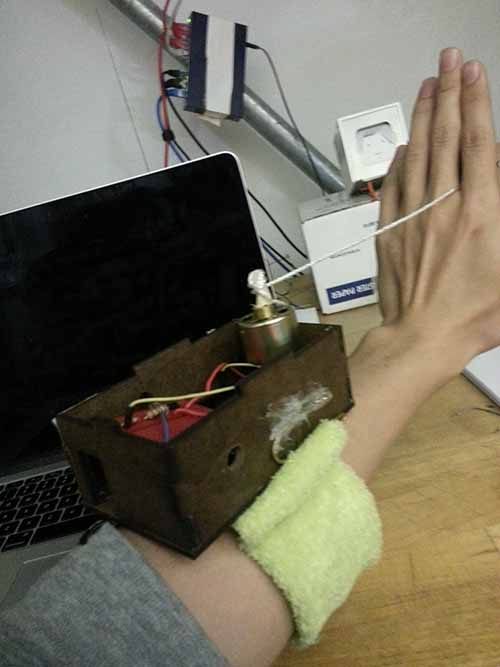 But I’m trying to change this physical part. It doesn’t have a very clearly feeling which is not what I want. I want to change to five rings that can be wear by people and when the string drags. It will drag your five fingers. I am also going to make a more steady device for this part. It’s not very safe.

Then I have the second prototype which is for final demo. It’s simple haptic device. I used a servo motor to push a cover of a box. And users can hold the box and feel the servo push the cover. Then I spring will pull back the cover and make it get ready for next movement. And there’s a little and simple 3D environment for the haptic device. It just very simple 3D environment which is formed by kinect. It formed a 3D red wall in the environment. And when people’s hand touched the object, the string will pull back the board and give the feedback to user. At this time I just check out the cross points that users and object have. And then decide whether they touch things. 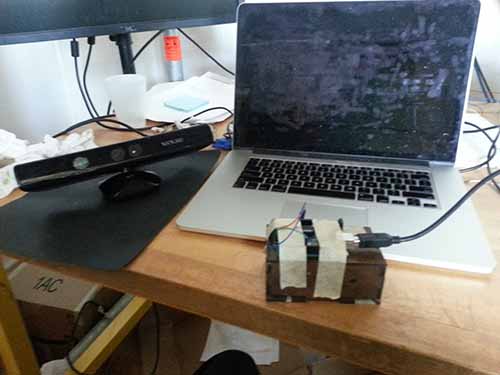