Author: Marlena Summary: In the real world, if you jump, you fall. In this piece, if you jump, you soar. Abstract: This interactive portrait is my way of expressing my feelings of the loss of a dear friend. The user can move about the ship that they find themselves on and, if they choose to jump from the ship, can fly with the fish that flock around it. Repository: http://marlenaabraham.com/?page_id=345

There is a question that I will never have an answer to: “Why did he jump?” I made this piece with that in mind; when you stand at a high peak, there’s a voice that tells you to jump. This piece is my attempt to reconcile the fact that I will never know what caused my friend to jump; perhaps it is also what I wish the real world was–In the real world, if you jump, you fall. In this piece, if you jump, you soar. This piece is dedicated to my friend Henry.

The music in the background of the piece is The Unanswered Question, a symphony composed by Charles Ives in 1906. The symphony elegantly represents the unresponsiveness of the universe when people ask unanswerable questions. I felt that it paralleled what I was trying to say with my piece and how I feel about my own questions. 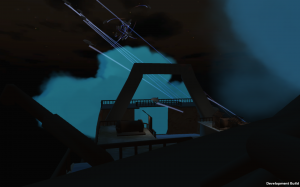 Conceptually, I feel that I succeeded in my goal of making a piece that resonated with my emotions. It is a very personal piece to me: the main goal was to come to terms with Henry’s death and in doing so memorialize him in the piece. In the end it was not immediately apparent to users that it was about Henry or suicide or any of the heavier topics that drew me to make it. I am happy that it ended up that way. I set out to create a peaceful environment as a memorial. I was told at the gallery show how beautiful it was; that it can still leave such an impression even without the knowledge of the deeper meaning means in my mind that I was successful.

While my main inspiration was my experience with Henry’s loss, I also drew inspiration from the works of such artists as John Gerrard and Tale of Tales. I would also like to note that I learned about flocking and other similar behaviors from Dan Shiffman’s Nature of Code as well as Craig Reynolds‘ work on steering.

On the technical side, I built this experience using Unity and Blender. Not only did I learn more important techniques in modeling and scripting, I learned a lot about steering behaviors in programming the fish. I certainly strengthened my skills in the medium and despite the initial difficulties in programming, I finished the project liking the results. There are perhaps more things that I would like to add to it, but mostly on the detail level: better lighting, ambient fog, smoother player control, perhaps more ships for the user to explore, and other elements to set the mood. In the end, though, it gets across what I want it to and I view it as a project well executed.

I would like to thank the Interactive Art and Computation Design class as a whole and Golan Levin in particular for their enormous support and assistance in making this piece. Golan suggested that I learn to use Unity for my last project and it has become my favorite medium.