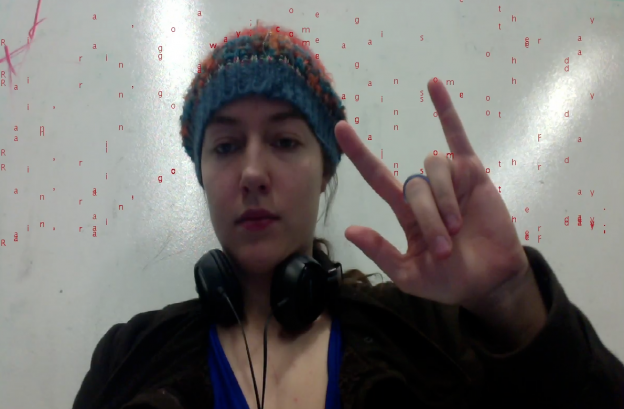 Author: Marlena Summary: A reimplementation of Text Rain using Processing Abstract: This is Part B of the Project-1 Upkit Intensive. It is a reimplementation of Camille Utterback and Romy Achituv's 1999 project by the same name. Repository: https://github.com/thisisanexparrot/Text_Rain_Processing_Assign

I decided to take an object oriented approach to my solution. Given an input string, the program splits the string into individual letters. Each letter is made into its own object and stored in an array of these Letter objects. This process is repeated to create several lines of the string that are then staggered at their start positions to create the “raining” effect.

From there, the program is loops continuously over every Letter object and checks the brightness of the pixel directly below it. If the brightness meets a certain threshold the letter will be pushed up until it finds a pixel of the correct threshold. This makes it appear as though the letters are floating on the darker areas of the screen. Otherwise, the letters fall to the bottom of the screen where they fade and are reset to above the top of the screen.

The code for this program is available on the included Github link and is also copied below: