Who has not heard of the urban myth that vending machines cause more fatalities each year than sharks? While reading up on the facts, I discovered that (a) these discoveries are caused by shaking the vending machine in an attempt to get money or free food and that (b) vending machine companies across the United States have voluntarily initiated a campaign to place warning signs on their machines, indicating that shaking a 400kg+ box which tips at an angle of only 20° could in fact be bad for your well being. I think this could potentially be done in a better manner than sticking yet another sticker on a surface already impeded by advertising. If, every time a vending machine caused a death, all vending machines across the word glowed red, perhaps people would take note. Rare events have a greater, longer-lasting impact than stickers.

My recipe images the blink is the light inside the vending machine: It takes the news feed from the International Herald Tribune, and every time a vending machine causes a death the blink should flash blue twice, then flash red. Red, of course, being the international symbol for “hazard”. Blue indicates “good”, or “calm” (etc.) indicating that the death happens quickly and is barely controllable.

The first part of my recipe conditions my fish “Miyagi”. Everyday at a specified time the Blink(1) which is pressed up to the side of my tank turns blue, reminding me to feed Miyagi. After time Miyagi learns to associate the blue light with food – positive association.  Once a week the Blink(1) turns red, reminding me to change Miyagi’s water. Miyagi finds water changes unpleasant and comes to associate the colour red with negativity.

After time I start to use the second part of my recipe.
When ever the New York times reports Animal Rights developments the Blink(1) blinks blue. Miyagi is happy.  (see – http://tinyurl.com/kv47fxb )

When the New York times reports on Over Fishing or Global Warming the Blink(1) turns red – Miyagi comes to know about the state of the world and is Saddened. Miyagi develops a kind of telekinetic empathy.

Inspired by old cartoons and playing a Wii game called Help Wanted (see a picture here, and look at the top middle character), I propose having a light be attached to some form of headgear (such as headband or cap), that lights up yellow for a few seconds whenever the user posts a tweet. The idea is that it mimics the cartoon character having a lightbulb appearing on top of their head whenever they get an idea. This kinda makes me feel nostalgic for the old cartoons. (Yay old school!)

But actually not sure who would wear this. Maybe put it on your dog and whenever it seems interested in something, indiscreetly make the light go on from afar, and pretend it facilitates interaction with people.

Inspired by my tendency to lose things, I propose having the light be small and attachable (maybe with a double-sided tape or on a clip) so a person could attach the light on any small, important objects. In my case, I have concerns about dropping my key somewhere in the dump pile I call my room. My recipe would then be to send IFTTT a text with “#findkey”. The blink(1) light on my key would then flash red for about 20 seconds, helping me fine my key. This is especially useful if I lose it in the dark. Not too artsy, but useful. (Yay utility!)

I’m sure I’m not the only one who has the terrible tendency to get distracted and then nearly miss events. It’s not that I haven’t stored the information about the event somewhere I can access, but rather I lose track of time and only realize until after the fact. My IFTTT recipe connected my Google Calendar to the Blink(1), slowly turning from blue to red when an event was approaching. I envision it being a minimal LED bracelet that subtly notifies the wearer when events approach, allowing them to either quickly remember themselves and rush to the event or consult their calendar for more details.

Inspired by recipes of blink(1) reacting to travel data and check-ins such as in Foursquare, as well as its ability to exhibit patterns of any color, the ISO-PROXM Ring is a concept of jewelry that lights up according to when a loved one checks in. The frequency of the light pulsations depends on the proximity of their location to your current one, letting you know when you are near each other.

This concept was partially inspired by my background as a third culture kid, which constituted a lot of moving around and never staying in one place for too long. Because of this it is often difficult to keep in touch with people, and a painful weight on the heart not being able to see loved ones. The light on the ring serves as a beacon of hope for those caught in the hustle and bustle of life.

The symbols on the rings pay homage to the Tron Franchise, a passion that a far away loved one of mine and I share. They distinguish between male and female ISOs (Isomorphic algorithms), a race of programs said to be the most ‘human-like’ in the franchise. It is interesting to note that ISO is also a common abbreviation in personal ads that means In Search Of. 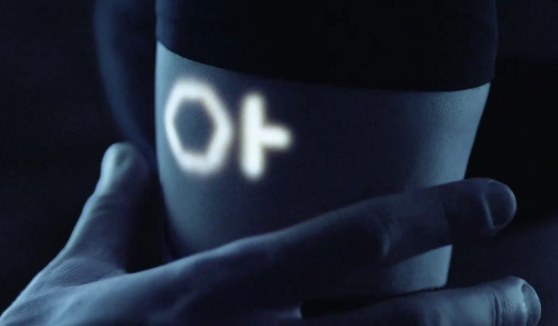 How often do we eat something because we are stressed or bored. My ifttt recipe idea responds to your personal weight. If your weight is over your “ideal weight” it warns you to open the fridge and grab some food. With “calories” you will be more aware about your eating and keeping your weight will be easier. “Calories” triggers you to pause for a moment and think about if you are really hungry. We can change our habits only if we are aware of them.

This recipe is for an indicator light ring to remind you that you are mortal. Every month, on your birthday, the color of the light changes slightly but noticeably, fading from a bright blue to a white color. Ideally, the light that changes each month is one of many—approximately 70 or 80 (average lifespan for a man or woman in the U.S.) The lights for years you have already lived are white; the ones for years to come are bright blue, and the one for the current year is somewhere between.

The ring is both a personal and public reminder of the value of a person’s time, and that life is ephemeral. The ring would remind that wearers death is inevitable, and so they should live fully and fearlessly now.

* should read “have passed”

The light glows light blue on the day of your birthday each month.

I’d like to focus on the beauty according in the natural world for my Blink System. The natural motion of falling snow or rain is one of the most beautiful scenarios in nature. For my Blink System, I’d like to create lights that change according to the weather. I wish to have blink lights installed between two sheets of glass that would be windows for a home. When the weather changes, the blink lights will be alerted through IFTTT with the weather channel. The lights will blink in a pattern of different colors shown below to simulate rain falling or snow falling.

Another similar installation would be through the traffic tunnels that cars often drive through on the highway. Although there are already yellow lights on the top of the tunnels, I feel that it would be both a fantastical and magical experience if blink lights, that were connected to the change in time were also installed to the side of the tunnels so that after a certain time, they would light up to simulate the stars in the night sky. Often in crowded cities, where pollution is a heavy problem, stars would be a rare sight in the night sky. Installing these simple little blink lights to either traffic tunnels or even the ceilings of rooms, can allow people to experience the beauty of nature.

My recipe is called the Charity Event Swagger. As the host of a charity event tweets a series of hashtags in order (#charity, #20%, 40%…), the Blink transitions from a dim red to deep green to indicate how much of the hypothetical donation pool has been filled. The idea behind this recipe is to have a multiple connected light structures throughout a charity event space. That way, possible donors have a strong visual feedback encouraging them to donate, and as those participating in the charity event get tired, the lights will ideally become greener and act as a reward mechanism.

Each day, unbeknownst to many people, at least three individuals who made a difference in the world – in some way or another – lose their lives. Perhaps you did not know that William Glasser, the psychiatrist who was the pioneer of ‘choice theory’ died at 8:13pm today. Perhaps you did not know that Ronald H. Coase, who won a Nobel Memorial Prize in Economics, died on Monday at the age of 102. Or perhaps you did, but simply switched to the next headline without much of a second thought.

My IFTTT recipe takes data from the New York Times Obituaries section such that, whenever the page is updated, the blink(1) shines a white light that stays for 3 seconds before dimming. Ideally, it would be in a curious-looking street lamp placed in the center of the Central Park bridge,  as bridges are often symbolic structures that connect the living and spiritual worlds. If the light gets triggered, it is likely that it will be during an odd time of day or well past the time the automated street lamps turn on. Some people may still dismiss the lamp and simply walk past it. But others may pause for a moment and wonder why this particular lamp, placed awkwardly in the middle of the bridge, illuminates for just a few seconds at random times of day.

The light in the lamp shines brightly for a few fleeting moments before going out completely, much like the nature of human life. It is a sign of respect for those who passed and – whenever people stop to look at it and ponder, if only for a brief second – gives the dead their moment of silence, serving as a beacon of remembrance.