My goal for this project was the creation of something from nothing, with a little bit of chaos.  I chose the letter ‘W” because its top is a flat plane, but its interior a lot of sloping angles, giving it many points in different parts of the image.  I thought this would make it the most interesting letter to transform into.

I decided I wanted to divide my letter into dot “splatters”, solid circles that would vary randomly in size and offset from their corresponding vertex each time the animation was played.  The overall effect was to be kind of an inkblot splatter, where a bunch of differently-sized objects *just* manage to form a letter.

In my sketches, I tried a bunch of things, but what I liked best was the notion of all the dots starting on the same plane above their position on the letter, and falling into place. 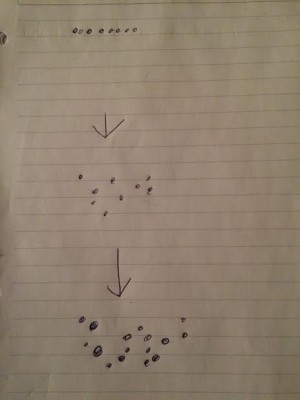 When creating my code, I found I was able to specify my letter as being composed of a number of dots — all I needed to do, then, is “remember” their place on the image, give them a starting y offset, and allow them to move back to their original place.  I found that the effect of changing the x-offset and shape of the dot at random as it moved creating a compelling effect as the dots moved and found their place in the image.