My bot is called @secretsofgreek and its URL is https://twitter.com/secretsofgreek. Ever wonder the secrets behind Greek Letters? Secrets of Greek Org is a bot that discovers secret meanings to Greek Organizations.

My bot was created using twitter. I was apart of a greek organization while attending undergrad, I always found it fascinating that each organization had their own ritual and secret meaning that had been passed down for over 100 years. Some have been “supposedly” leaked while others are still unknown. My goal was to create a bot the explored the secret meanings to greek organizations as a way to unveil the secrets. Most organizations are written in a different language and dont translate directly to an English word. Some of the times I have been surprised as to the formation of the words, but other times it makes absolutely no sense. If I had programed the bot based on adjectives, verbs and nouns it would allow for more sense to be made of secrets. But I appreciate the randomness as you never know when you will recognize a word or what new “secret’ you will learn. The post above made me laugh as it refers to studying music, while having irregular yellow patches of skin and lying down on the ground. When they sound funny, theyre more comical, but if you look up the definitions and piece it together thats when its even more enjoyable.

I also found this tweet to be pretty funny as it declares pi sigma tau to be propane staged tumbleweed. But this is an example of more insync grammatical context I was referring to above instead of having 3 nouns together or 3 verbs, etc.

As I have recently posted this I have not had anyone follow my bot, but my audience is anyone interested in greek organizations. People in the past have asked me what my organization meant and it was nice to have a secret to keep, but I always enjoyed when people tried to guess. This bot stems from that experience, and other people in greek organizations have related similar experiences to me. If the tweets are comical people will enjoy it. 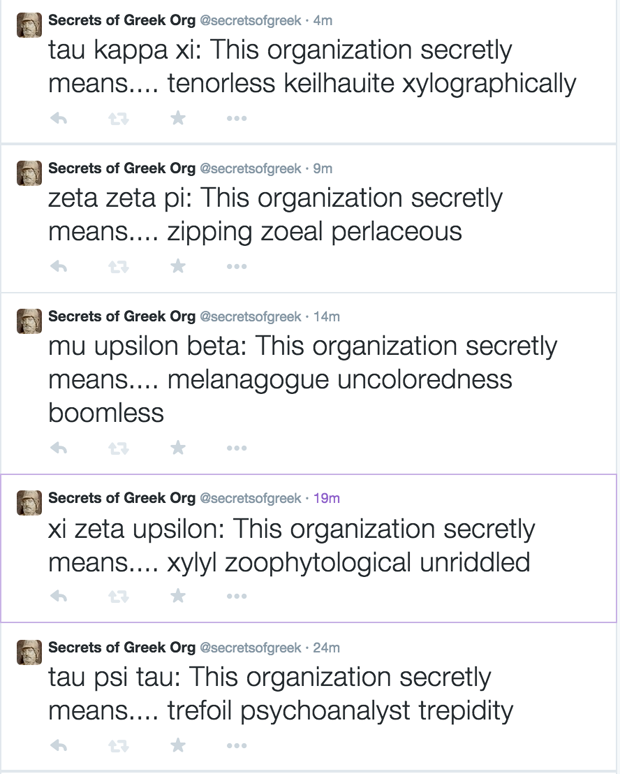 According to  Michael Cook’s taxonomies, my bot would fall under the Mash-Ups of greek letters and dictionary words.

You can find the code here: https://github.com/amyfried/secretofgreeksbot