(BEAT BLOX from Per Holmquist)

I found this project on the webpage, which introduced the tools used in this project. As far as I know, it is an interactive beat machine using turntable device and sensors to detect the location of small squares, and then produce sound out using this data.

I found this project very interesting because the quality of beats produced by this machine is well designed and of quite high quality, and this device is colorful which is also attractive.

However, I think the variety of the beat is constrained by the number of rings and number of turntables. If people want to add more kinds of beats, they could only add more turntables and this disadvantage would make this work hard to develop. Besides, the maximum speed is also limited.

As of the key part of this work, the idea of beat machine has been developed by thousands of artists and musicians. I guess this work is also inspired by many traditional beat machines or sequencer like the following, from native instruments: 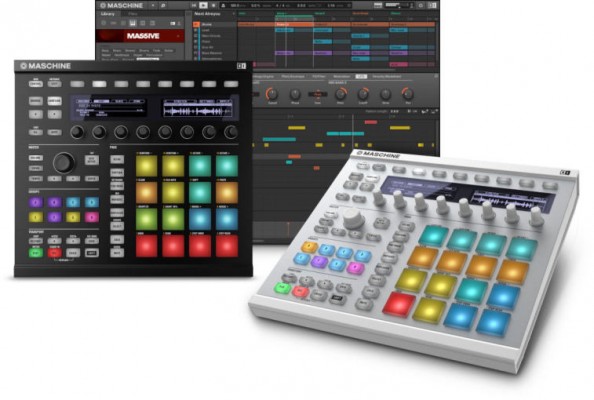 The most similar work I can find is this one:

(Turntable based Sequencer and synthesizer / MAX MSP from Itay Niv)

The theory of making beat machine is similar, and both of the two works choose to do it in an interactive way. The first one uses distance sensor, while the second one chooses digital camera to capture image of small objects.

This video is about a music game that detects rhythm patterns and then uses this pattern to battle. It could detect live drums and also MIDI signals, and display the rhythm or beats on a screen.

This game video seems interesting for me, but I must say, the improvement space for the user interface is big and the game play pattern is rather simple. It might be a general defect of music games like osu! and jubeat. To add music factors into an interactive design, I would prefer to put music into daily use rather than make it a game.

There is a third work I want to recommend, which is not new for me. It is a cute small piece of music using keyboard of a laptop to trigger music samples.