I’m going to visualize data about rating on different albums based on different music magazines and websites. The object is to tell the listener which media are the most proper with his/her own taste in music selection.

I was inspired by this graph, which intend to tell people which is Radiohead’s best album in 21 century.

So the idea occurred to me, that we should find new music basing on the media that share the closest taste with. And analyzing rating data on different albums might be a good solution. 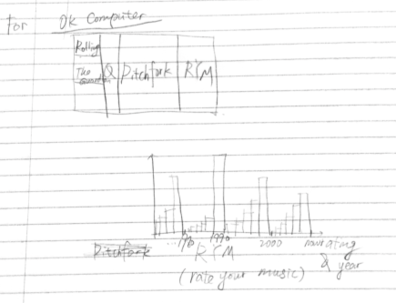 The first scratch is based on an album’s rating, the area of the medium corresponding to its normalized rating. The second shows a certain medium’s taste, categorized by decades, listed 50-100 highest rated albums.

If the design come true, I would definitely use it to find new albums.( • ̀ω•́ )