My project is called FindNewAlbum, and it’s a simple implementation in d3.js. Data scraped from RYM. Using top 18 albums listed in RYM, I find lists including these albums respectively, and get albums inside these lists, then map relating albums with the original albums to find the albums more related to the original ones.

Initially, I want to make a music magazine recommendation system, because it really matters when I want to find out new-released albums but have no idea where to find it and which magazines fit my taste best. But when I was scraping data from these magazines’ websites, I found it was extremely hard to get scores and reviews on certain albums — their links seem to be random. So I end up like this — just recommend people albums based on other famous albums.

You can see I divide the circles into 18 colors, as I just extract the including lists of the top 18 albums in RYM. The radius of a circle increases as this album is included with the original album more frequently. 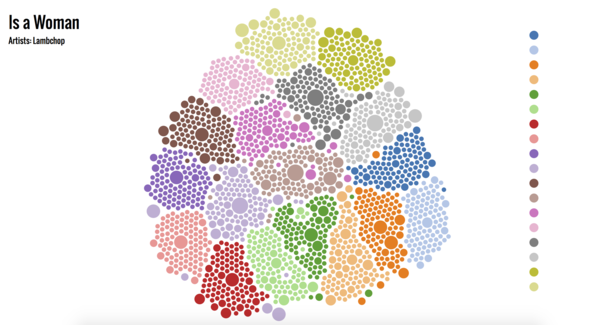