It took me a little bit longer to find a topic of interest for this LO post. It is difficult to find recent works in computational design in which architectural space and organization is the central issue (while form and performance follow it). 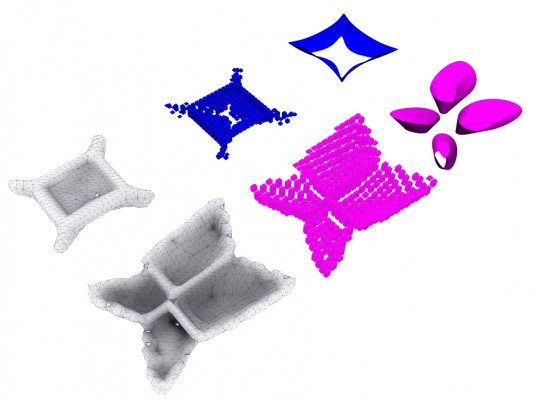 Firstly, I was visiting the website of the ZHA|CODE (Zaha Hadid Architects Computation and Design Group) and saw that predominantly the works focus on producing an appropriate work-flow to deal with complex forms based on some kind of performance. However, among these research and workshops there are some opportunities in which space and organization seem to emerge. Particularly, I found it interesting the project “BODY PLANS : voxelise ,breed , evolve“. As the title makes clear, this project is part of a research on topology optimization and voxelization and it is connected to the participation of the group in the Venice Biennale 2012  in which they produced a beautiful pavilion. Maybe it is only in my eyes, but I really saw potential in these mesh generation to think about architectural configuration, that is why I decided to post it here.

After a while researching for poly surface and mesh subdivision for spatial exploration I ended up discovering the website dplay with many interesting propositions on design and computation. Between these propositions there was a post titled “Exploring Soft: Exploring computational methods to play with and articulate flexible programs/space”, in which Kaustuv De Biswas developed a Java applet called metabolica (in a cross reference to meta balls and metabolism) to deal with design exploration.

It is interesting that the author presented this tool as a part of a larger project called Sunglass in which a common environment should support design exploration with different inputs, leaving the obsession by technical performance as a consequence of this process of discovery (and not the inverse). This proposition may sound very simple, but in terms of design thinking and computation it is clearly out of the mainstream. Not only it challenges the common ground of generative and performative design (in which form should be only an output of objective constraints) but also it try to grasp flexibility and ambiguity of a design exploration based on ideas and interested in space.