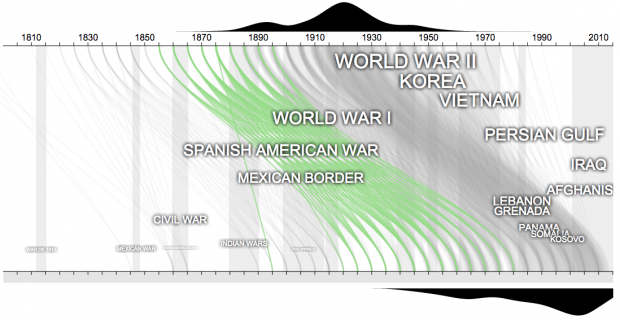 Tweetable Summary: Who are the 4.5m people buried in US National Cemeteries? @SciutoAlex makes a graph about it. Hint: They’re almost all WWII privates.

War often defines a generation. The rise of the term, “Greatest Generation” for those who served in both World War II and Korea, highlights how war, especially ones with wide participation, binds a group of people who are similarly aged. I’ve always been curious about generations, and those who don’t fit neatly into a pre-defined group. This project visualizes generation based on their war service.

My general process was sketching, data cleaning, and implementation.

I had hoped that the data cleaning would not take long, because the data appeared pretty good, but I found that the data was very poorly recorded, and there were many factual errors. For example, veterans were recorded to serve in wars they had not yet been born. Or veterans birth dates didn’t contain century indicators—”01/03/07″ could refer to 1807, 1907, or 2007. I tried heuristically fixing errors, but in the end, I removed a lot of data that was clearly incorrect.

If I were to to do this again, there are a few changes to my process I’d make. I wish I had more fully thought through my ideas and selected one to do more sketching. My sketches were nuggets of ideas, but when implementing it, I found I had a lot of blanks. I filled in the blanks, but it took a lot more time. Another change: Data is hard to sketch with. My ideas for how the data would look didn’t fit reality. I think that I would split up implementation into two steps. The first step is making the raw visualization as quickly as possible and seeing if the form of the data matches the sketch, then sketching more based on that. 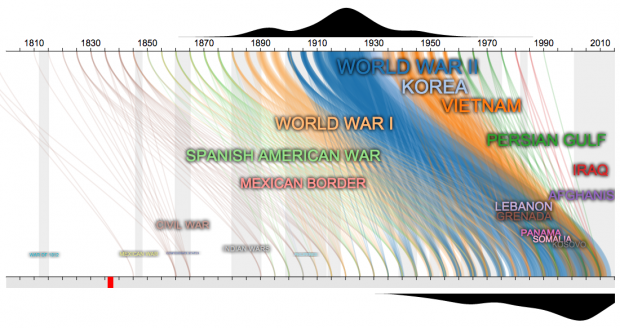