I enjoyed the Twitter bot element of the assignment the most. Not necessarily because of the specific bot that I produced, but because I’d never worked with node.js before and found it fairly straightforward. I followed Daniel Shiffman’s Twitter bot tutorial on Youtube and his step-by-step instructions helped me gain a clear understanding of how to set up and use the tools at hand. When I finally tweeted out my first successful tweet (a la Shiffman’s direction) I was so proud of myself I took a screenshot.

However, I spent so much of my time getting the bot set up with the twit package and my new Twitter account that I ran out of time when it came down to figuring out content. I had many initial ideas for the bot, but ended up posting images of birds because I was most interested in learning how to post from an image database (as opposed to posting from a Processing sketch, which I already knew how to do).

Given more time, I’d like to pursue some of my other ideas and work on creating a bot with different content now that I’m comfortable with getting one set up. 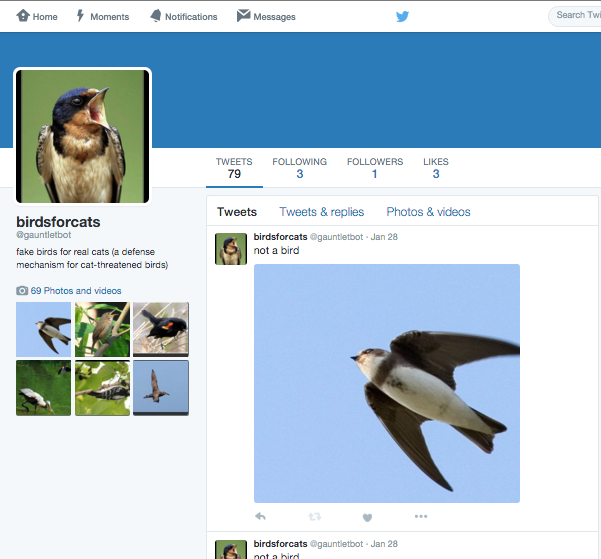