One of the most fascinating types of computational art that I have seen and use is a software application called “Mandelbulb 3D” made by a number of people, among them, “Jesse” and collaborators from Fractal Forums. I consider it a work of art in its own right because it is a way for the viewer (or the user) to explore the different fractals possible, creating endless combinations. There are artists who are using software like this to create fractal worlds we can explore in 3D and VR (probably first done by Julius Horsthuis). The relative ease of creating fractals and their increasing popularity has incentivized entertainment industries to create fractal worlds (such as in Guardians of the Galaxy 2).

As the authors note, the piece was inspired by Daniel White and Paul Nylander, who created a 3D mathematical model of the famous Mandelbrot fractal. It is not entirely clear how long the project took, but it appears to have been around for about 3 or 4 years (according to the Github).

Here is an example image, titled the “The Corridor of the Ring” and made by artist Ricky Jarnagin using Mandelbulb 3D. 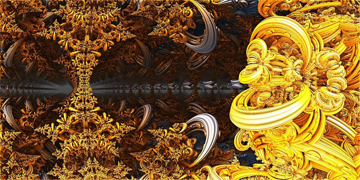 Here is an example GIF from the video, Prophecy (4K) by Julius Horsthuis.