I eventually decided to make the “AR tech hurdle” I would work on to be a UI for my independent study project.  I am giving a person the experience of feeling like a sphere, and part of that involves putting the person in a Zorb ball and having the ball being pushed according to the person’s will.

Here’s how it works: within the Zorb ball is an accelerometer that keeps track of the ball’s orientation in real space.  The viewer also holds a controller, which indicates their desire to go left, right, forward, or backward.  Based on the viewer’s desire and the orientation of the Zorb ball, a number of other people have to push the ball to make it roll in the right direction.

The problem I encountered at the last rolling-meeting was that the person who “calculates” the direction the ball should roll in, the “person-controller,” has a very difficult time making the computation quickly and efficiently.  I thus decided to create a UI system that can help them.

I consider this an AR issue, because rolling the ball properly augments the reality the person encounters in real, physical space.

Below is the UI the person-controller will see.  It is currently inactive. 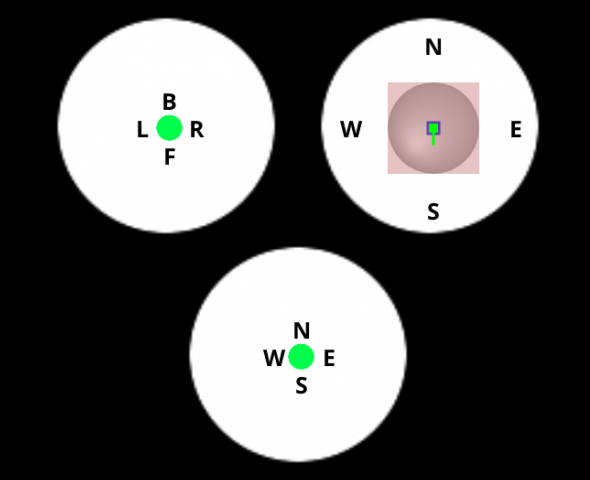 The top left circle indicates the user’s thumb position on the hand controller.  The green dot will move around the circle once the UI is activated.  The B stands for roll backward, F for roll forward, L for left, and R for right.  The top right circle indicates the person’s orientation with regards to a defined coordinate system of north/south/east/west.  The bottom circle is the circle the person-controller will use to determine which direction the ball should be pushed from.  If the green circle indicates N for north, then the ball should be pushed from the north direction.

I will test how well this system works at the next roller-meeting and report the results for the final AR-project.