I am creating the experience of being a sphere.

I was inspired by the concept of spheres and new forms of self-being in the aftermath of an unhappy time in my life.

The project is twofold in its execution.   Ultimately, the experience is both audiovisual and tactile.

The first aspect is the audiovisual experience, and the conceptual meaning tied to it.  As I give the person the experience of being a sphere, I also encase them within a society of spheres with their own type of existence, logic, and dialogue.

The part I will be presenting here is the more tactile, technical side, on how I give a person a new body.   The base of the physical body is a Zorb ball which is 3 meters on the outside and 2 meters on the inside. 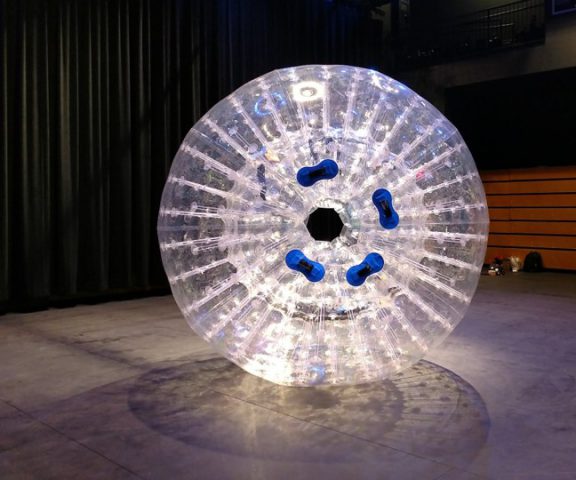 The above picture is the Zorb ball taken within the Studio Theater in Cohon University Center. 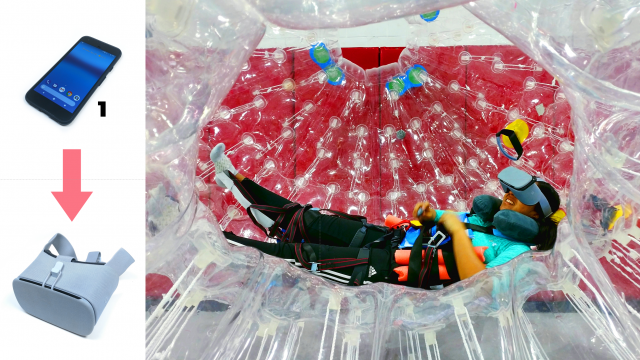 viewer with straps and headset

Within the ball, the viewer is strapped in.  The straps the ball came with were quite ineffective, and so I designed a new strapping system involving lots of lashing straps, velcro, and a rock-climbing harness.  The person wears a Daydream virtual reality headset, and the virtual reality is communicated through a Pixel phone, generously loaned by the STUDIO. 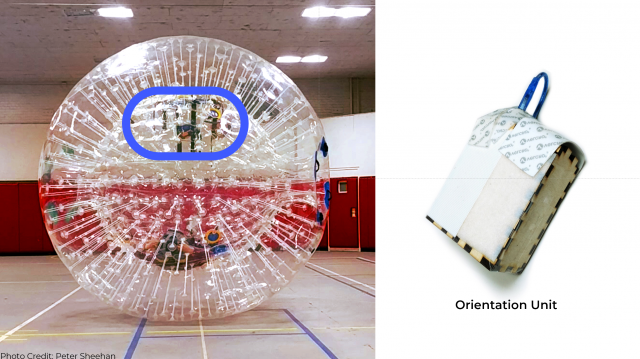 orientation unit: connecting the physical and the virtual

In order to connect the reality of the physical body with that of the observed virtual reality, I allow the viewer to experience the effects of the rotation of their ball body.  The rotation is communicated from the ball’s movement to VR using an orientation unit, shown on the right and placed in the blue outline within the ball. 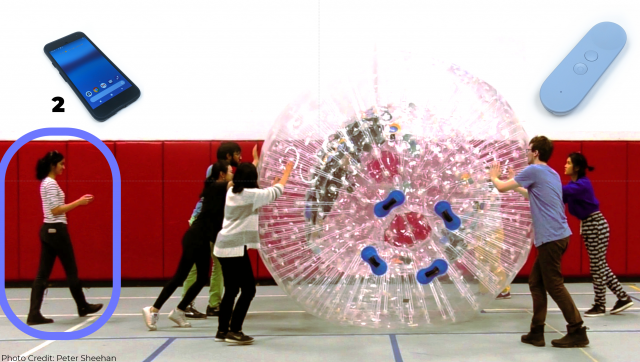 Though the viewer inside the ball cannot, in reality, directly control the ball that they are in, they still perceive a sense of will over the ball.  They use a controller to dictate their desired motion.  Pushers will push the ball in the appropriate direction.  A “coordinator,” highlighted in blue, tells how to push the ball correctly in physical reality given the controller output from the viewer and the orientation of the viewer in physical space. 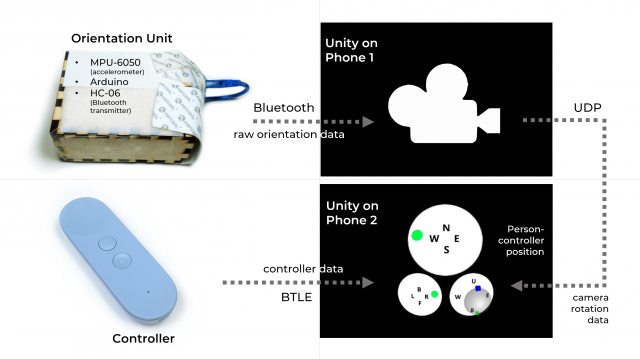 Here is a summary of how the signal processing works know that we have gone over the ball itself.  The orientation unit within the ball sends ball-rotation information to the VR phone.  The coordinator needs to tell the pushers how to push the ball in the right way, so they use an app on a second phone to help them.  The second phone takes in controller output from the viewer as well as information about where the viewer is looking at.  From those two bits of information, the second phone can compute how the force should be applied to the ball so that it rotates in the desired direction.

Here is both a GIF and video showing the physical aspect of my project, involving the ball.