Question 1A. Read the first 20 pages of “Generative Art Theory” by Philip Galanter (p.146-166). In your own words, and in just a few sentences, discuss an example of something you like which exhibits effective complexity. Where does your selection sit between total order (e.g. crystal lattice) and total randomness (e.g. gas molecules, white noise, static). Include an image which illustrates your selection.

Everything At Once by Ryoji Ikeda. 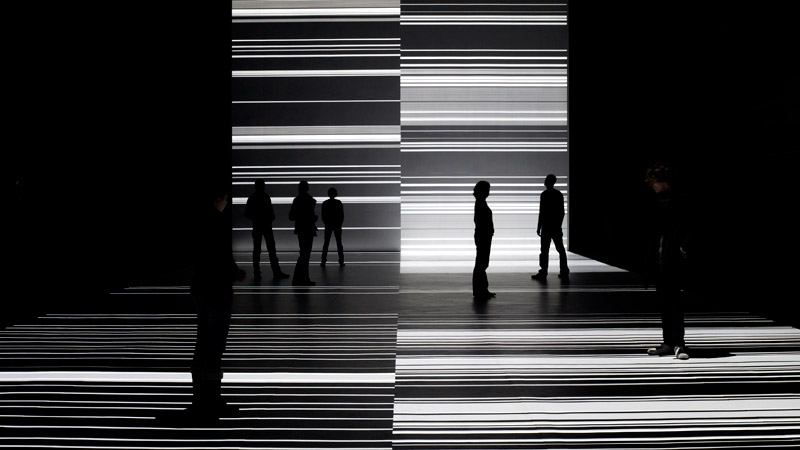 This piece by Ryoji Ikeda expresses effective complexity, because its disorder seems intriguing to the viewer, rather than off-putting. This is due to its partial order. I was lucky enough to see this piece at The Strand in London last semester, and was mesmerized by the artists work. This piece most likely stands slightly closer to total randomness than total order, at least in first impression. Behind the scenes, one could be made aware of the great deal of order put into a piece such as this one.

The Problem of Meaning: Can and should generative art be about more than just generative systems?

Galanter explains about generative art that it “imposes a teleology that does not exist in natural systems, and does so even though the art is supposed to be inspired by natural systems. One conclusion would be that this imposition of top‐down teleology introduces a kind of conceptual incoherence.”

He suggests another, more truthful process, which would be bottom-up rather than the opposite, leading to an unknown product. Although I understand that following this process might lead to the core of generative art, is it the best form generative art can be? During my sophomore review I received the unanimous critique that my work was too methods based, and did not contain enough social and emotional content. Would adding these things diminish generative art? Or would they improve it?