Go investigate new media artworks, and write a Looking Outwards report on a project of your choice. In case you need a reminder, here are the requested components of a Looking Outward report. Please title your report, nickname-LookingOutwards04, and categorize your report, LookingOutwards04. Feel free to ask the professor for advice about artists, projects, or venues of interest.

2. A “Page from Another World” 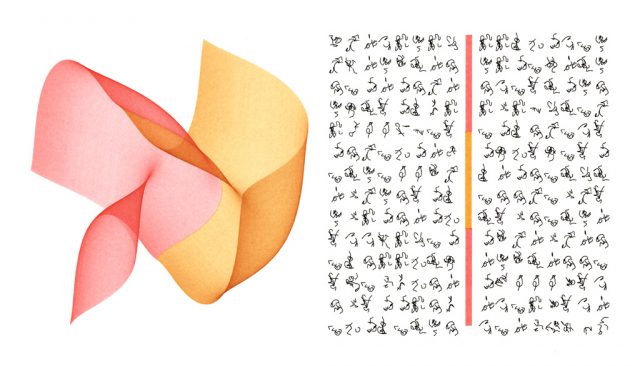 You are asked to write code which generates “a page from another world”: a composition of asemic writing, to be rendered by our computer-controlled Axidraw plotters.

In generating this page you are asked to create a visual object with multiple levels of hierarchic, structural organization (for example: letters, words, paragraphs). You are also asked to consider the problems of machine calligraphy.

Below is information organized as follows:

Some Starting Points for Asemic Writing

Think carefully about what constitutes writing. From Wikipedia:

Writing is a medium of human communication that represents language and emotion with signs and symbols. In most languages, writing is a complement to speech or spoken language. Writing is not a language, but a tool used to make languages readable. Within a language system, writing relies on many of the same structures as speech, such as vocabulary, grammar, and semantics, with the added dependency of a system of signs or symbols. The result of writing is called text, and the recipient of text is called a reader. Motivations for writing include publication, storytelling, correspondence, record keeping and diary. Writing has been instrumental in keeping history, maintaining culture, dissemination of knowledge through the media and the formation of legal systems.

Please read the Wikipedia article on Writing Systems, which I quote here:

The general attributes of writing systems can be placed into broad categories such as alphabets, syllabaries, or logographies. Any particular system can have attributes of more than one category. In the alphabetic category, there is a standard set of letters (basic written symbols or graphemes) of consonants and vowels that encode based on the general principle that the letters (or letter pair/groups) represent speech sounds. In a syllabary, each symbol correlates to a syllable or mora. In a logography, each character represents a word, morpheme, or other semantic units. Other categories include abjads, which differ from alphabets in that vowels are not indicated, and abugidas or alphasyllabaries, with each character representing a consonant–vowel pairing. Alphabets typically use a set of 20-to-35 symbols to fully express a language, whereas syllabaries can have 80-to-100, and logographies may have several hundreds of symbols. Most systems will typically have an ordering of its symbol elements so that groups of them can be coded into larger clusters like words or acronyms (generally lexemes), giving rise to many more possibilities (permutations) in meanings than the symbols can convey by themselves. Systems will also enable the stringing together of these smaller groupings (sometimes referred to by the generic term ‘character strings’) in order to enable a full expression of the language.

Give thought to your symbols: how they are (individually) composed, and how they are visually sequenced into higher-level ordered structures. Observe that in English writing, it emerges that some letters occur more frequently than others: 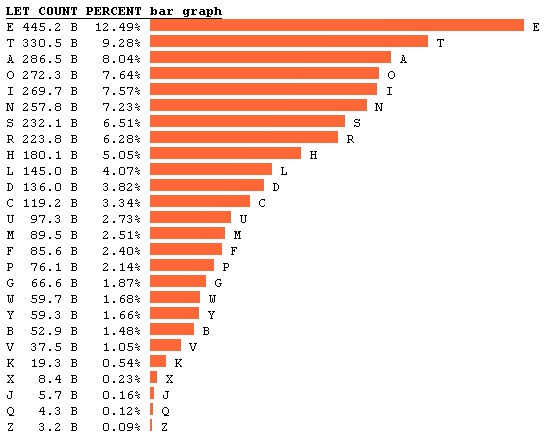 You may wish to consult our class lecture notes on asemic writing, or do some online research (at Asemic Magazine, in articles like this, or via Google image search) to get ideas. Below are three additional possible starting points or premises. This is far from an exhaustive list.

Another Starting Point: Permutations of a Logical System. Conduct an exploration of a “Minimum Inventory, Maximum Diversity” system, a term coined by Peter Pearce in Structure in Nature Is a Strategy for Design (1978). Christopher Carlson writes that “a minimum inventory/maximum diversity system is a kit of modular parts and rules of assembly that gives you maximal design bang for your design-component buck. It’s a system that achieves a wide variety of effects from a small variety of parts. Nature excels at this game: every one of the many millions of natural proteins is assembled from an inventory of just 20 amino acids.”

The artwork Variations of Incomplete Open Cubes by Sol Lewitt (below left, 1974) and Arc Forms by Christopher Carlson (below right, 2009) illustrate this. Open Cubes shows possible forms of a cube with one or more missing edges. Arc Forms shows all possible combinations of semicircles joined at 3 connection points evenly distributed along a vertical line. You can choose to design a visual structure for which it is practical to enumerate all possible combinations — or you may design one for which it isn’t.

Once you’ve designed your system, you could present the set as a chart (as shown above) or use sequences of your symbols to compose another document…

Another Starting Point: Take a Line for a Walk. In his Pedagogical Sketchbook (1925), Paul Klee states that a line is a “dot that went for a walk”. Here, develop a composition in which the plotter goes for an interesting walk, or collection of walks, in a manner similar to cursive script writing. Give consideration to how you articulate and give nuance to the randomness governing the walk!

We have an Evil Mad Scientist Axidraw2 and Axidraw3 available. Keep in mind that with plotters, your basic graphic primitive is the line. If you want to make a filled shape, you’ll have to do that with… lines. This may require that you design a hatching or filling scheme of some kind. Our plotters have a rendering area of 12″ (wide) by 8.5″ (high), with landscape orientation.

You have a fundamental technical decision to make; there are basically two different ways you can control a plotter:

Generating a PDF in Processing

Processing can generate high-resolution vector output in the PDF format. To do this, we strongly recommend you consult this terrific set of instructions here. That webpage includes instructions on how to generate PDF files in many different ways, including: generating 2D art from 3D geometry, generating PDFs from multiple frames’ worth of graphics, etc. I also provide template code, below.

Note: You are permitted to use Adobe Illustrator to correct small errors in the PDF output, but you may not use it as a design tool for this assignment. For example, it sometimes happens that there’s an extra invisible rectangle placed around your artwork, which the plotters will unwittingly draw; this rectangle can be easily deleted in Illustrator. However (for example), you may not generate an alphabet of characters and then lay them out into sentences in Illustrator.

Note: Filled shapes drawn by Processing will not be filled by the plotter! Do you understand? This point —the difference between raster and vector graphics— is one of the key learning objectives of this assignment.

Here’s a very simple Processing template which I’ve made for you, adapted from the above, which has most of what you’ll probably need:

The above code produces a random walk using a Bezier curve.

Here are some things to note about this program:

More instructions for rendering a PDF with the Axidraw via Inkscape may be posted here.