Response 1A Michael Noll’s Gaussian Quadratic is a vivid representation of effective complexity. A sense of structure and support is demonstrated by the algorithm’s careful approach to drawing lines despite it randomly picking formulas to base the lines off of. Because of this structure, it retains some order while leaning more heavily on the total random side. 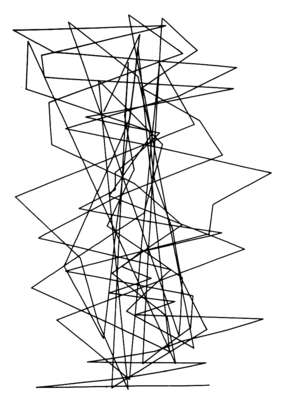 Response 1B The problem of Creativity. Generative art works on algorithms. So are the machines that use these algorithms creative? One side says no: that they rely on the algorithm entirely to create the art. The other side says yes: that there is room for interpretation in the algorithms where the machine can choose to set their own parameters. While most of the time these parameters are set randomly, there is a sense of creativity to randomness. It is an artist’s creative choice to use randomness in their work, just as it is an algorithm or program’s choice to do the same. This is why I support the notion of generative systems being creative.