My final project visualizes a ghost-like, imaginary creature that lives in electric outlets and reacts when touched by users. 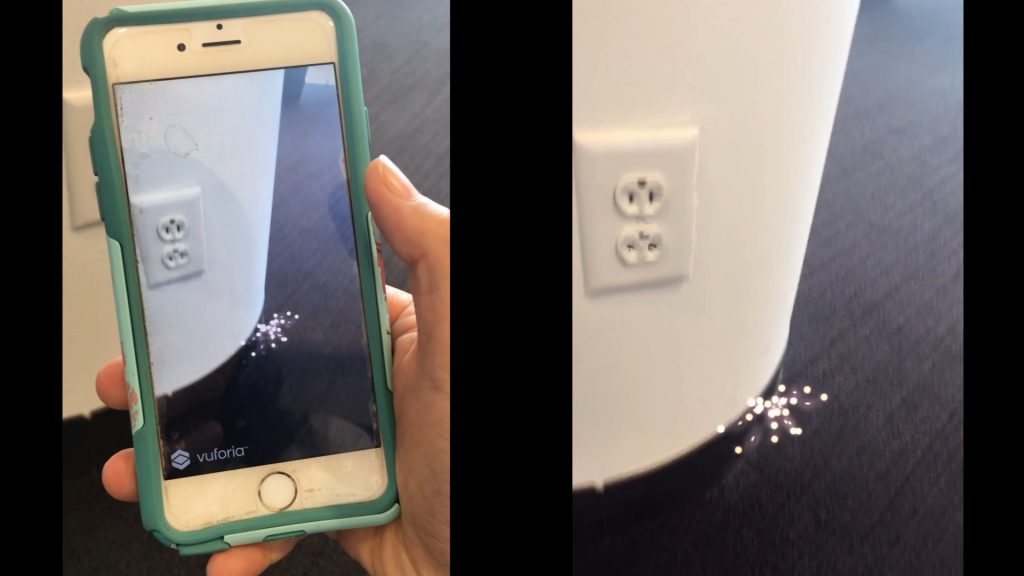 This was actually quite far from my original idea. At the beginning I brainstormed about fish and / or fireworks, as described in this post. After some time of jumping technical hurdles I got something like this ↓ where user uses the second image target (lighter) to approach the first one (firework) to light it and send it into the air. 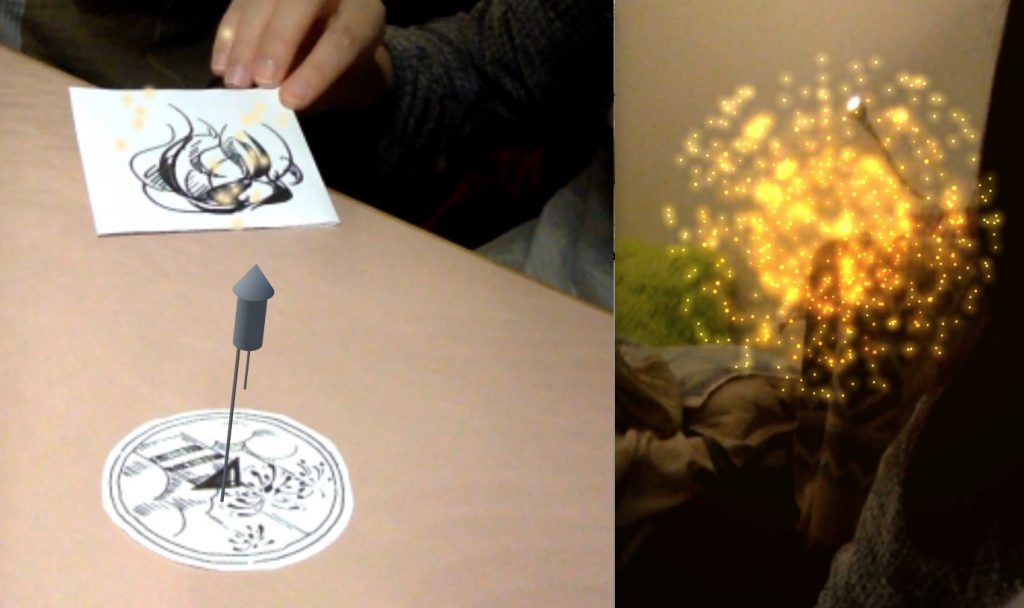 However, the image targets were too obvious as image targets (don’t fit in the context well), and I couldn’t scale up the firework because 1) it doesn’t make sense to light huge fireworks indoors and not burn the ceiling, and 2) Vuforia’s image target tracking doesn’t always work perfectly, so when the user looks up, it’s very likely that the firework explodes at somewhere totally unexpected.

So I abandoned most of the physics rules about how a firework should look like (big thanks to everyone’s suggestions during our last critique). The “firework” no longer shoots from ground but from an electric outlet instead, in the form of some fish-like flocking creatures. After the “fish” explodes (which happens when the user uses the lighter to approach it), it doesn’t disappear right away- it splits itself into more “fish”, ready to be lit again by the user and explode. 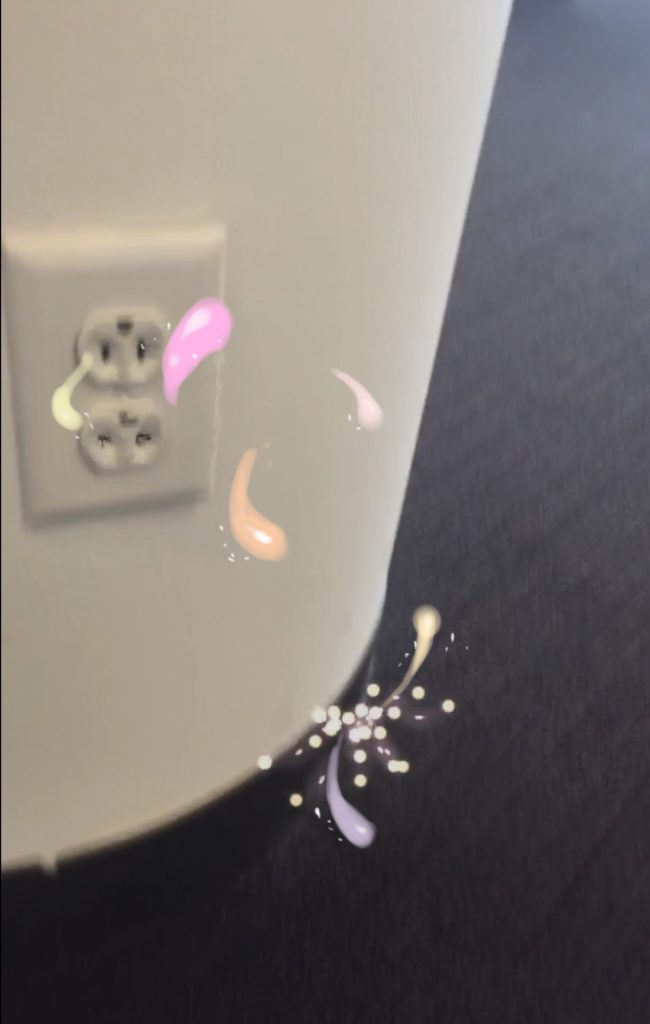 Unfortunately I lost my screenshots at this stage, but this is how it looked like.

I even tried a string of stones that can explode. Abandoned that idea quickly, though, because it makes even less sense to have stones dropping out of outlets. 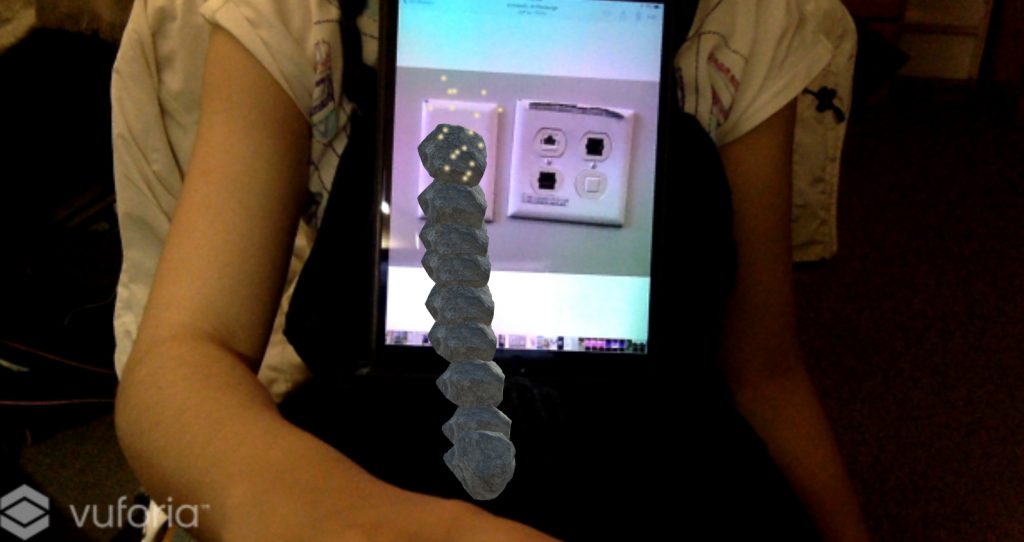 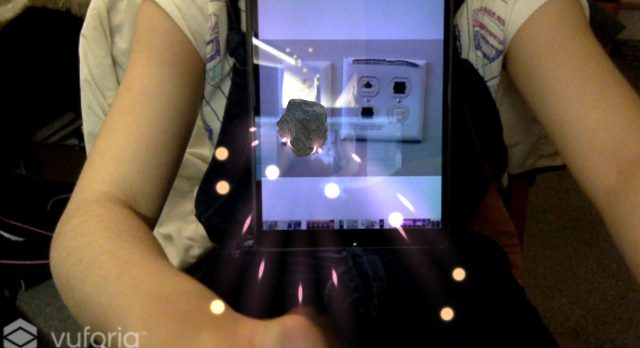 Eventually I went with a transparent, ghost-like creature, which avoids the generic quality of pretty much any primitive 3D model and adds mysteriousness to the creature (I think). The creature can still be seen, though, because wherever it passes by the background is slightly warped, as shown in the video.

The way it’s implemented is very close to the fishworks idea, but instead of having a trail of balls moving around, there’s a trail of particle effects with Unity’s glass shader and a transparent but bump-mapped texture. Input for this program is just touch on screen, which then calls a raycasting function and detects if the ray hits the creature. Output other than the screen is vibration when a creature is touched. For this part I’m inspired by static electricity. Too bad I can’t actually produce that to shock the user.

I want to give great thanks to everyone in this class who gave me generous feedback in our last critique. I especially thank Jackalope and Erin Zhang (not in this class) for helping me brainstorm, and Conye for motivation as well as lending me her iPhone for testing and documentation, and of course Golan for his honest critique and suggestions.