My graphical concept was to create a “sound clock” where the frequencies corresponded to the hours, minutes, and seconds.  These three frequencies would come into harmony when the hour was struck.  I was originally going to program this piece for Max.  However, I didn’t want the piece to only be accessible for people with the software, and I wanted to have the ability to embed it.  I decided, then, to explore the p5.js sound library.  I was able to create my initial idea in it, but it wasn’t interesting sound-wise and, if anything, sounded pretty annoying.  I then looked into different ways I could manipulate the sound, but still have it represent the time.  I ended up filtering sound with a band filter that increased in frequency based on the hour.  The minutes would then be in different harmonies with this filter frequency depending on ratio intervals ex. 2:1 (octave), 3:2 (perfect fifth), 4:3 (perfect fourth), 5:4 (major third), 6:5 (minor third).  I lastly had the seconds alter the resonance of the band filter so that it would progressively get more “noisy” as it neared the next minute.

In terms of improvements, I would like to make a better transition between the hours and at the start of a new day. I also think the piece could be more visually interesting.  Using a FFT was my original idea, and although it is a good way to visualize sound, it is not very engaging.  Despite these changes I would make, I am proud of my ability to convert my original concept which relied on a software I am comfortable with into a form of code that was new to me.  I also enjoy the final sound that is produced.

As this is mostly a sound piece, I have attached videos instead of gifs:

Sounds produced every 10 minutes to show how the piece changes throughout the day: 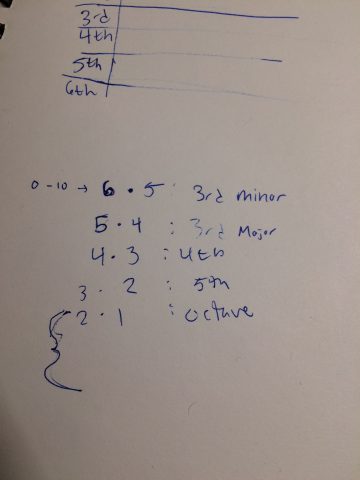