Note: This project is also my Engineering & Arts capstone, which I worked on as a part of 60-212.

Sometimes, people need to send a message that can’t be expressed as a text, or emoji. It’s a feeling.

I created a pair of networked scarves that allow romantic partners to send feelings to one another, in the form of heat. When one partner puts a hand in the pocket of their scarf, the other person’s scarf warms up.

Distilling communication down to this simple gesture makes it possible to explore complex attention dynamics in relationships. Does one partner reach out more frequently than the other? Does the other partner respond? I’m interested in investigating the imperfections in relationships, and in codifying those complex dynamics using wearable technology. 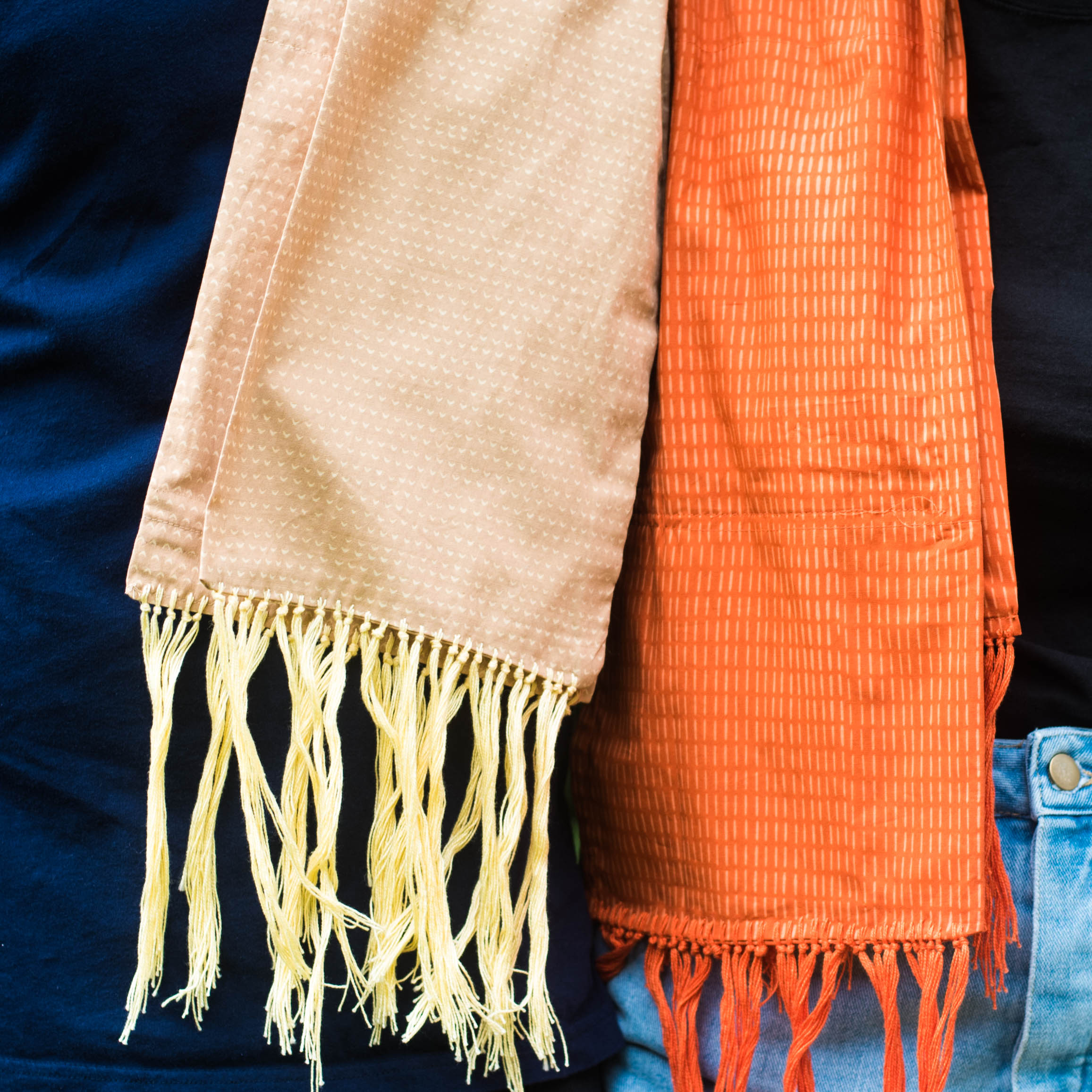 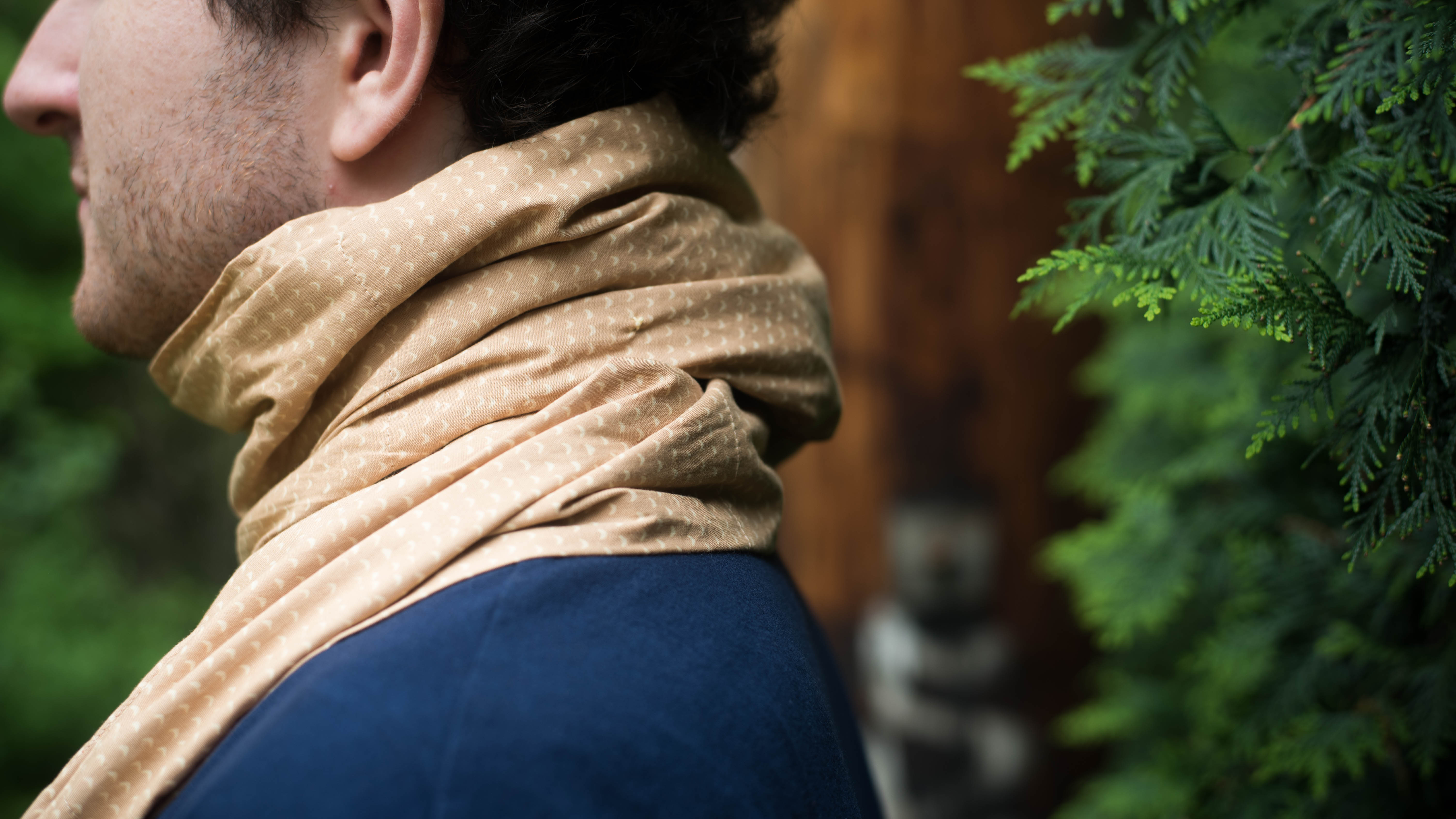 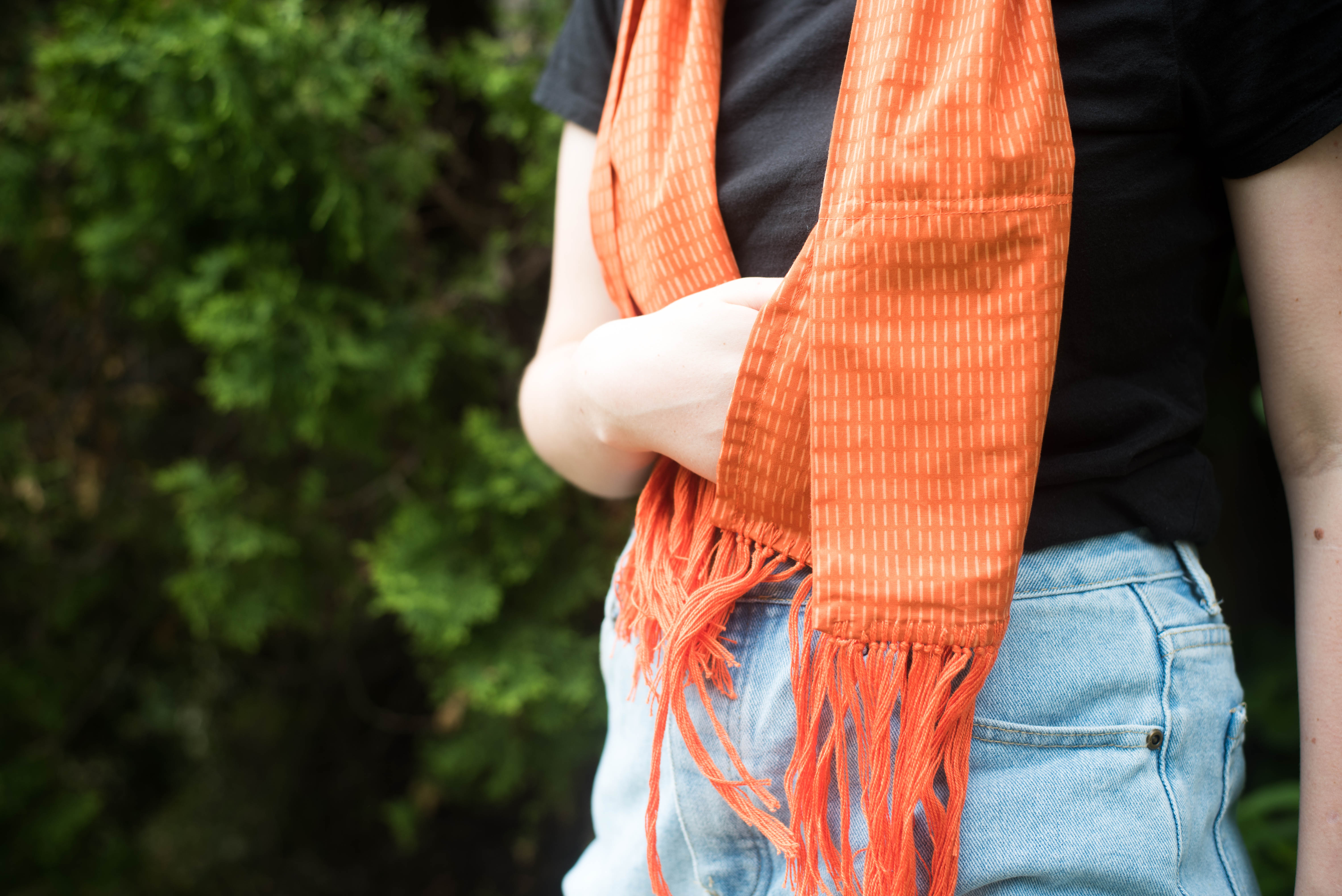 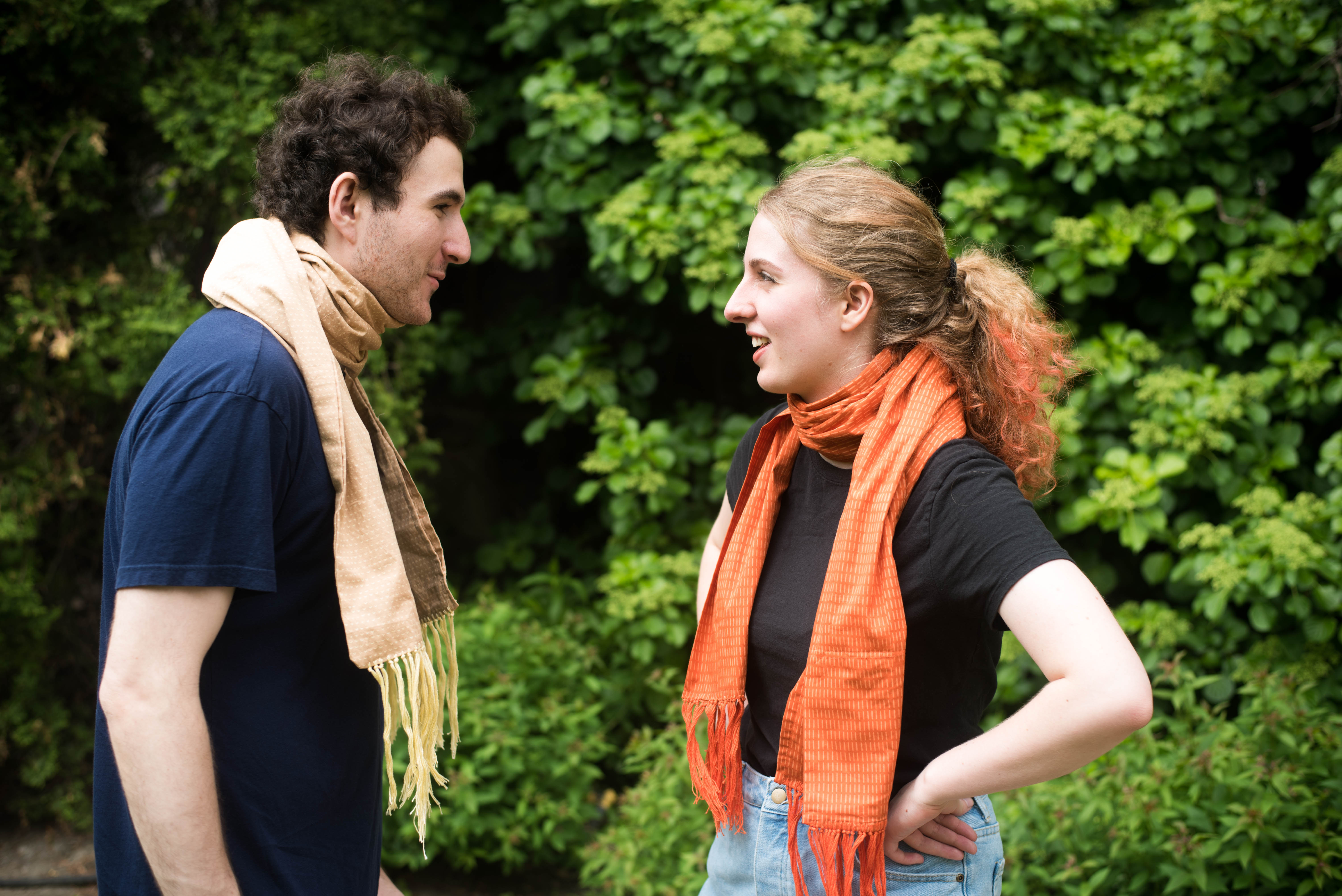 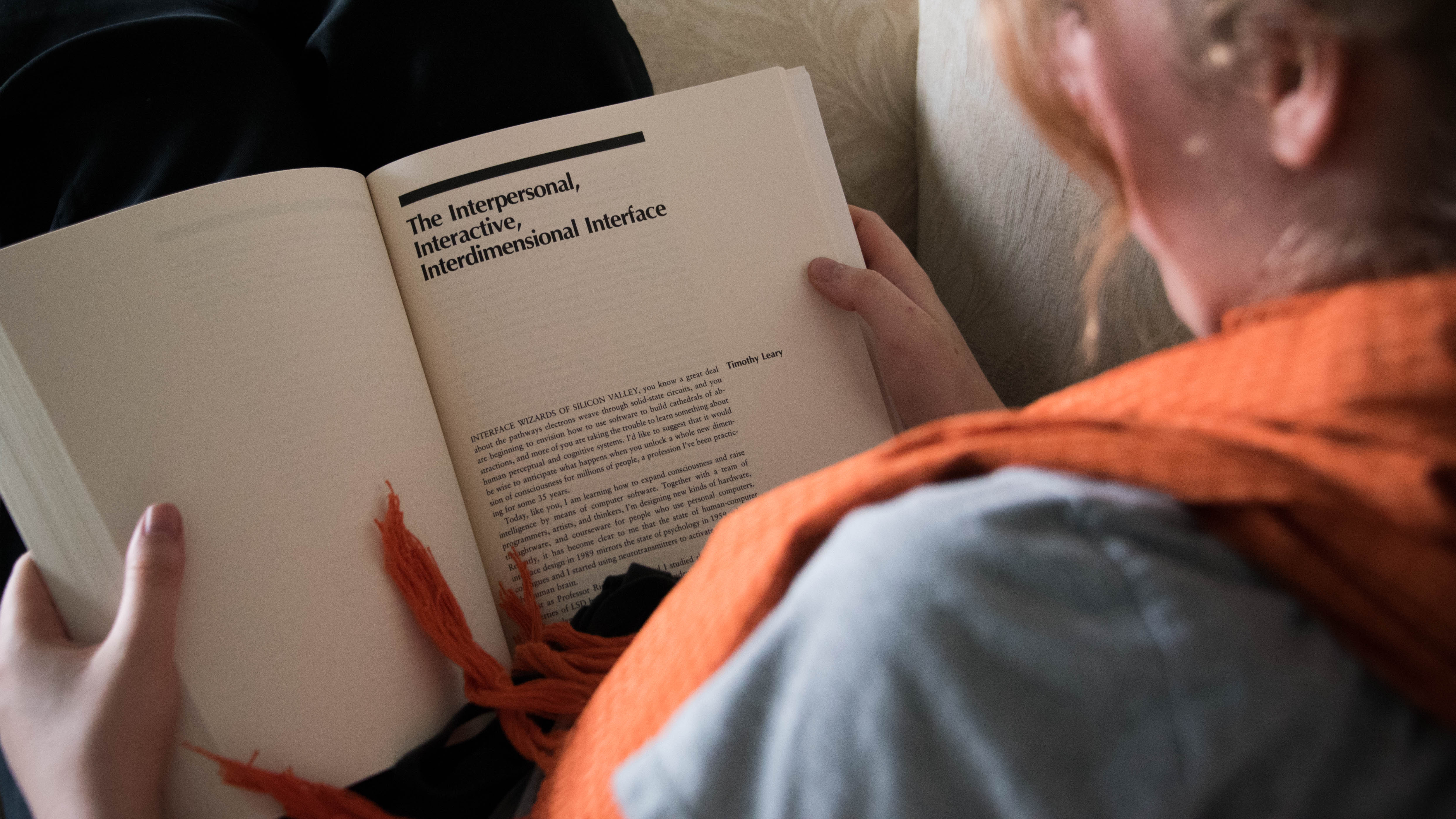 I started off this project by researching attention dynamics in romantic relationships. In any relationship, giving and receiving attention is key to both partners level of satisfaction. When each partner gives and receives their attention in a balanced way, they both tend to be more satisfied. But when one person needs more than the other person is willing to give, the disconnect puts strain on both partners. This generally happens to most couples at some point or another for circumstantial reasons. However, in some relationships, it becomes a pattern.

My original inspiration for this project came out of my own history with imbalanced attention dynamics in a previous relationship. Being the anxiously attached partner, I would reach out over and over again and rarely receive a response. One can also empathize with the detached partner, who can feel bothered by the constant need for validation exhibited by their anxious partner. 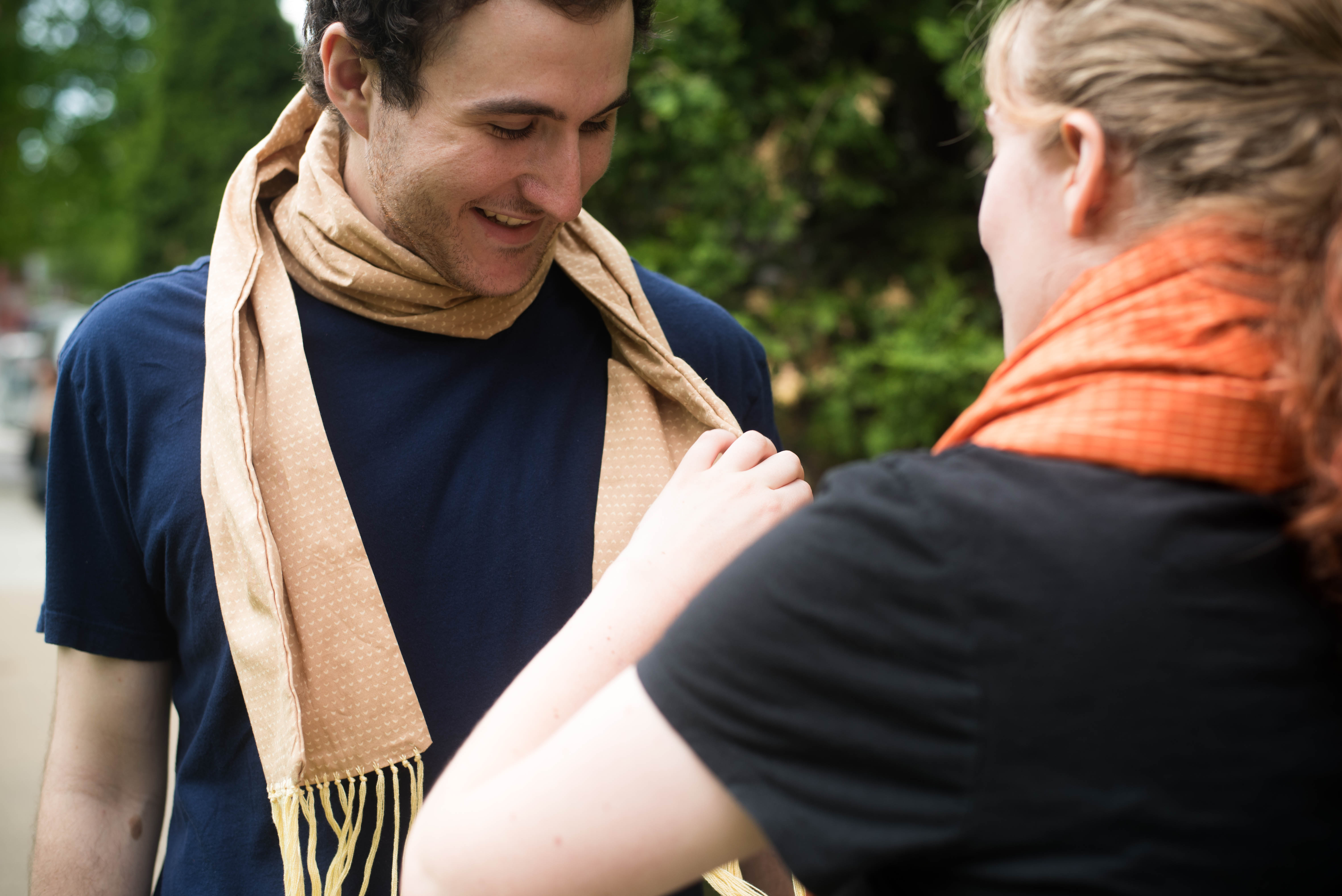 In deciding on the form of the wearables, it was important to consider several factors. I wanted it to be easy to access a hidden compartment, where the wearer would send the signal to their partner. I also wanted it to be quick to take the item on and off, in case either partner needed a break from communication. The wearable needed to be large enough to house all of the electronics, with convenient spots for holding a Raspberry Pi and other technological components.

Looking at all of these requirements, scarves stood out to be an obvious choice. They live close to sensitive parts of the body, and the back of the neck is an ideal space for providing an intimate physical sensation. The front of the scarf has close access to the wearer’s hands, which allow them to interact easily with the pocket on the side. And the electronics can live at the back of the neck, where they won’t weigh down the garment. 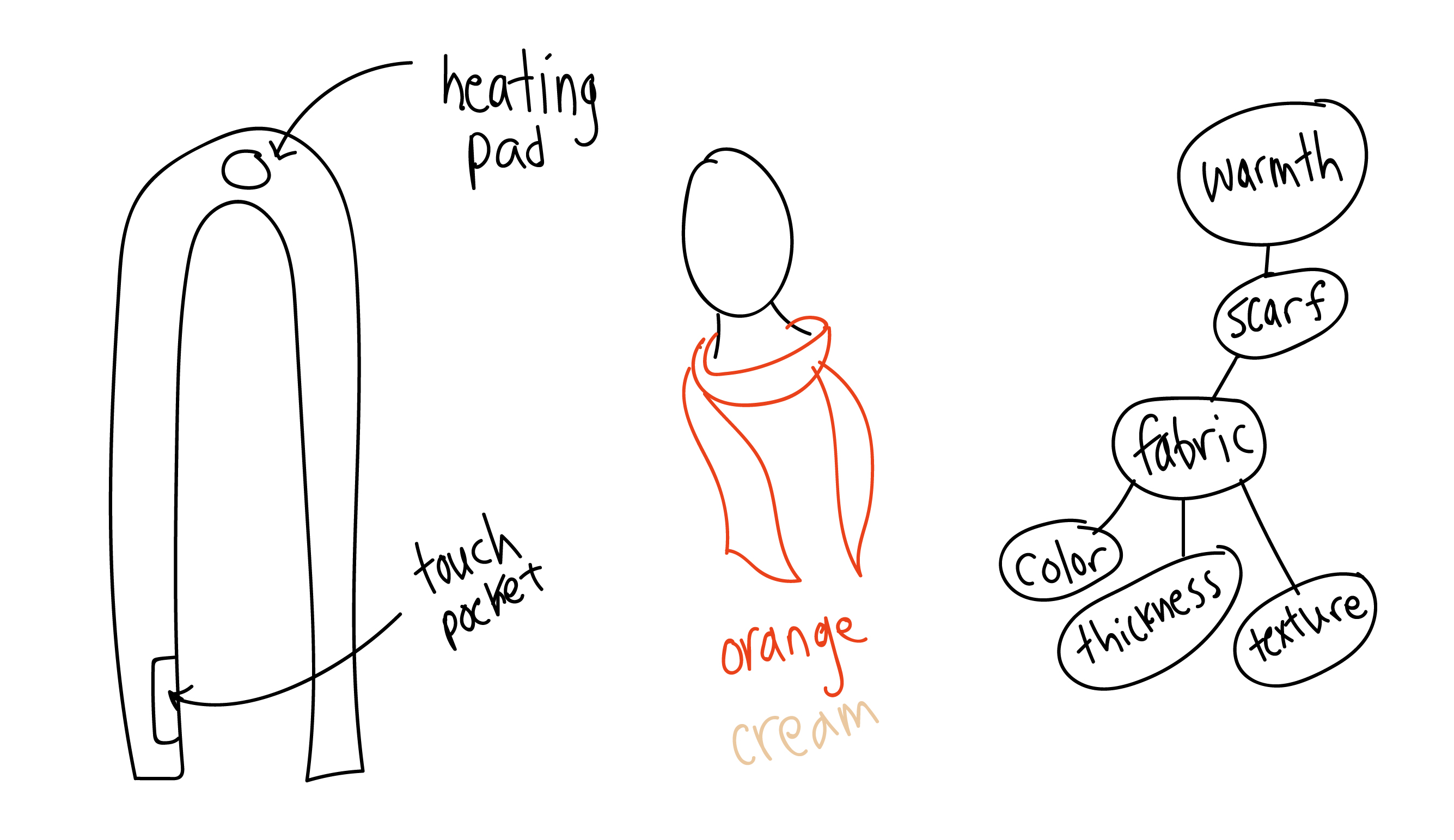 The texture, color, and emotion of the scarves is very important to me. I explored different concepts, and ultimately settled on an aesthetic that I felt represented my goals for the project.

Often, wearable technology is intended to look as flashy and high-tech as possible. I wanted to depart from that, and create something earthy and intimate. I chose a muted color palette with natural tones. The two fabrics I picked play off of one another, with one more muted and one more active color. Both of the scarves are primarily made of a different fabric, with accents of the other color throughout, such as inside the pockets.

I chose a woven material for the fabric, as it was both a light fabric that could be worn in lots of different weather, and it was pleasant to work with and sew to. 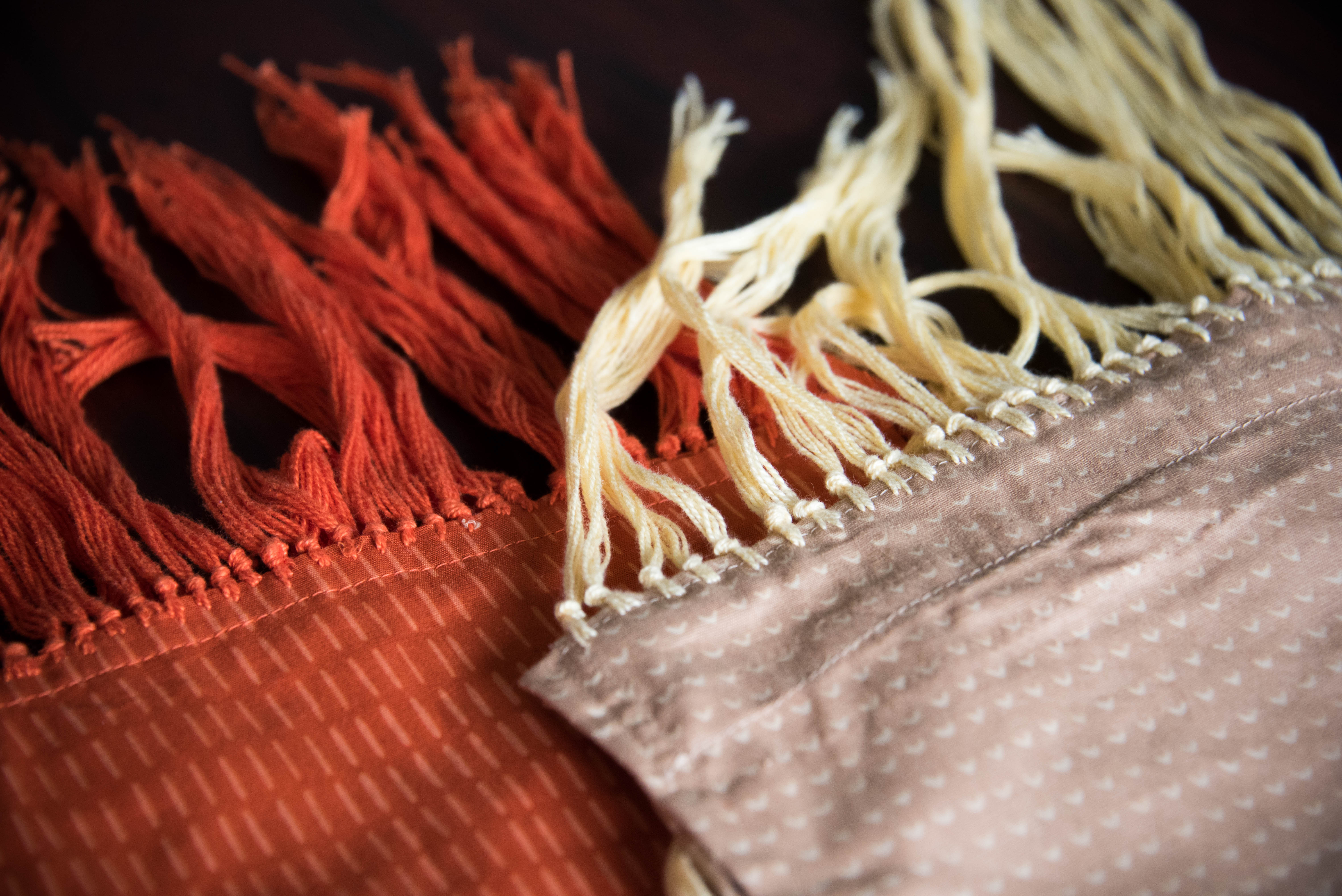 Before I started developing the real thing, I made several phases of prototypes.

I got all of the tech working, and to work through the challenges of sewing into physical material, I put them in a pair of black hoodies. 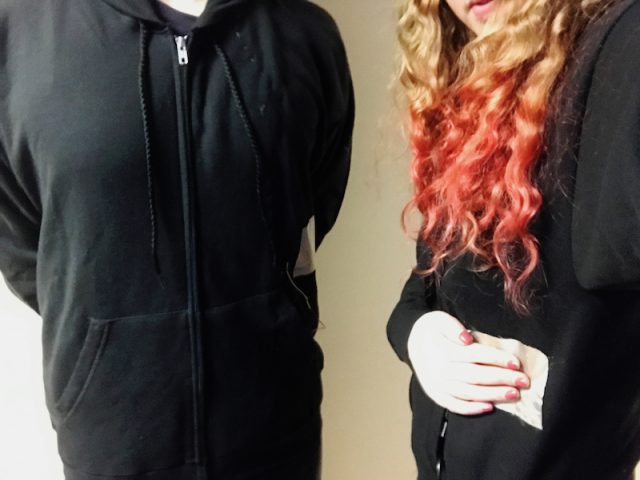 I decided to do scarves for my final version, and laid out where each of the electronics would go. 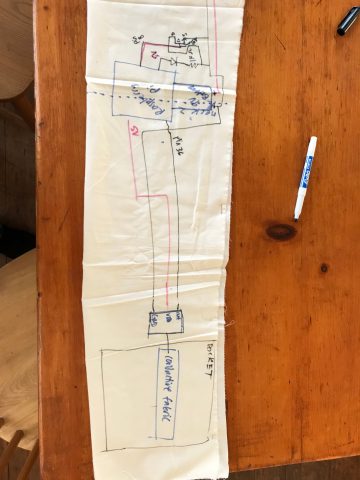 I put the heaviest circuit components actually inside of the scarf, to test if it would be horribly uncomfortable to wear. It wasn’t. 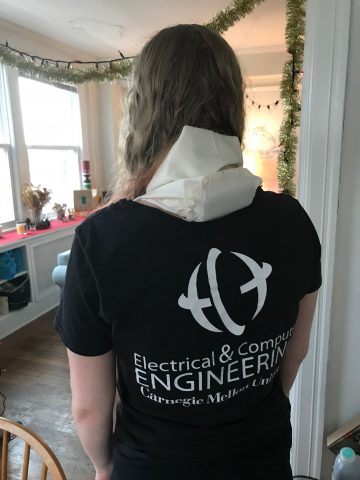 I made a prototype version just using the sewing machine, to assure myself that I would be able to do it. 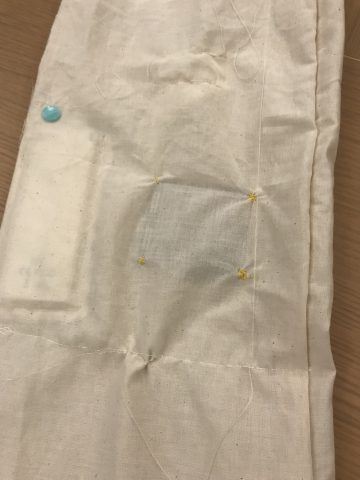 Each scarf is powered by a Raspberry Pi computer. When one Raspberry Pi senses that it’s touch sensor was activated, it sends a signal to the other scarf to turn on the heating pad. 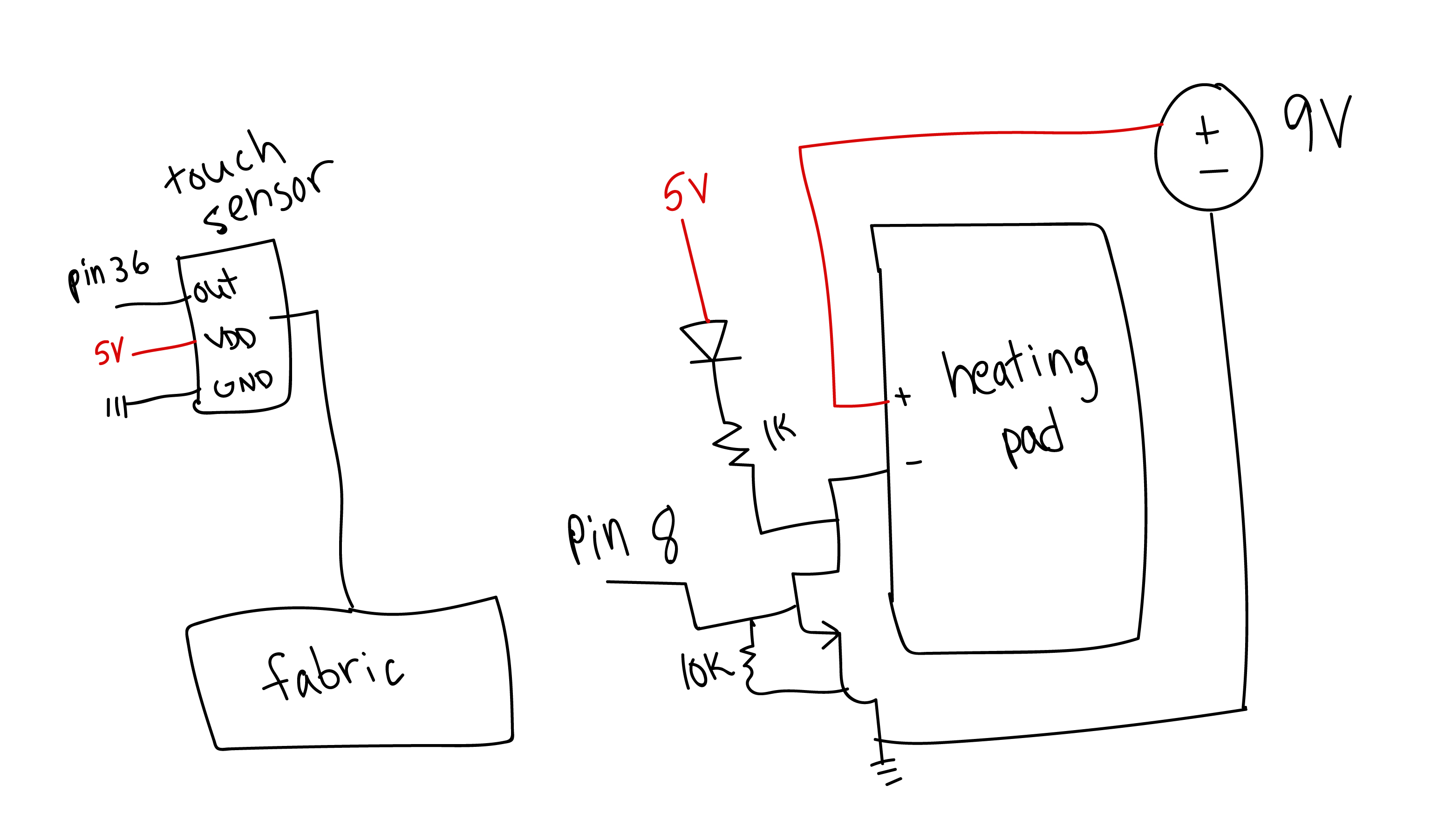 Turning on the heating pad involves an extra battery and a transistor. 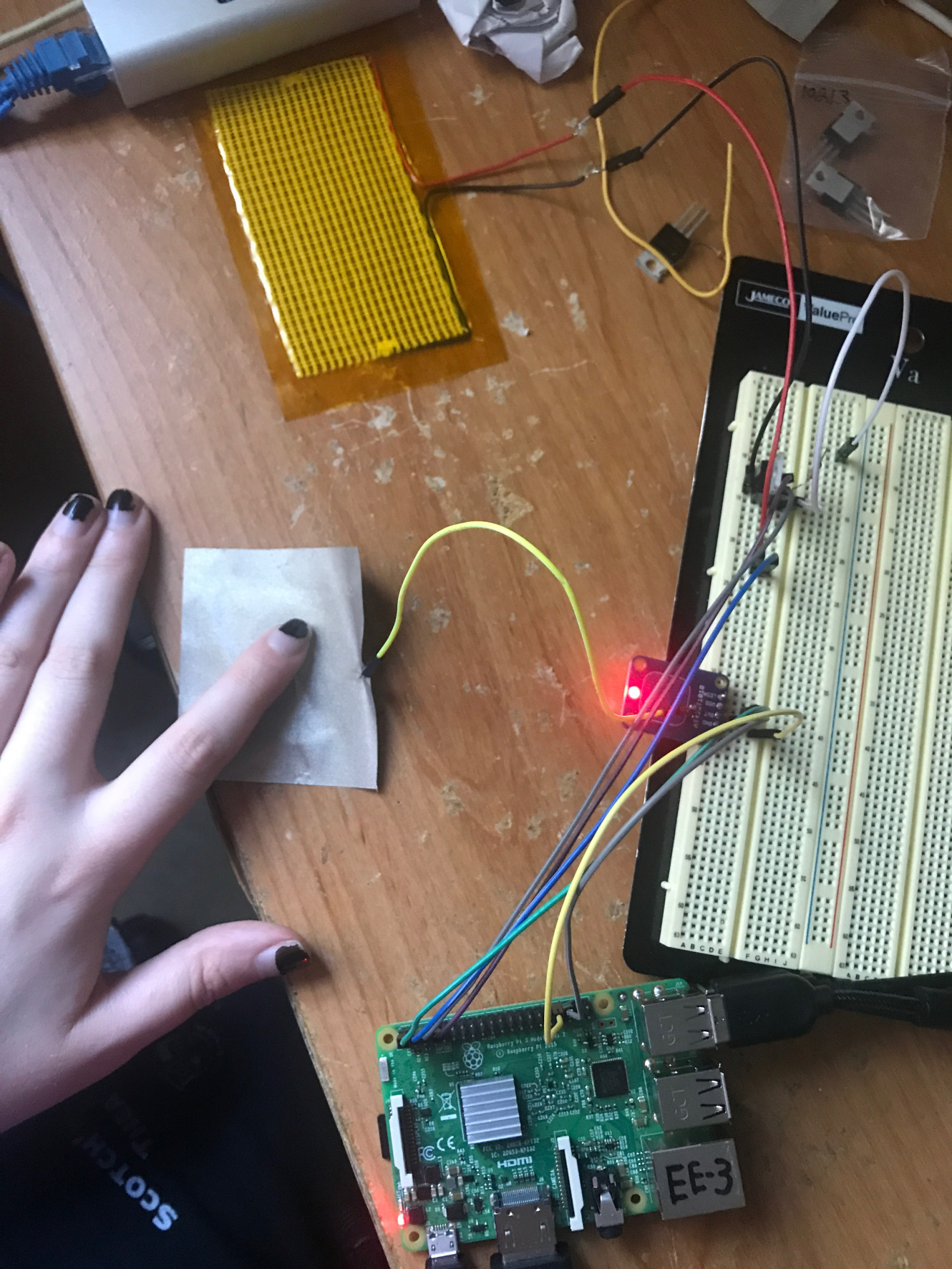 The hardest part was definitely creating an ad-hoc network between two Raspberry Pi’s so that they can communicate wirelessly without connecting to another network. CMU secure is so picky that I decided to bypass it, and just have the computers talk to each other without wifi.

I originally tried using an ESP8226 with an arduino, and ultimately realized that a raspberry pi was a way better option.

There are two Raspberry Pis, both nodes in this ad-hoc network. I learned that there are special ranges of IP addresses, one of them being the 10.2.x.x range, which is where we placed the Raspberry Pis. Raspberry Pi A is set to 10.2.1.1, and Raspberry Pi B is set to 10.2.1.2. A whole slew of other very particular and specific network settings had to be changed in order to make this a reality, but ultimately we were able to set up an ad-hoc network where A and B are connected to each other, so you can ssh into one from the other. 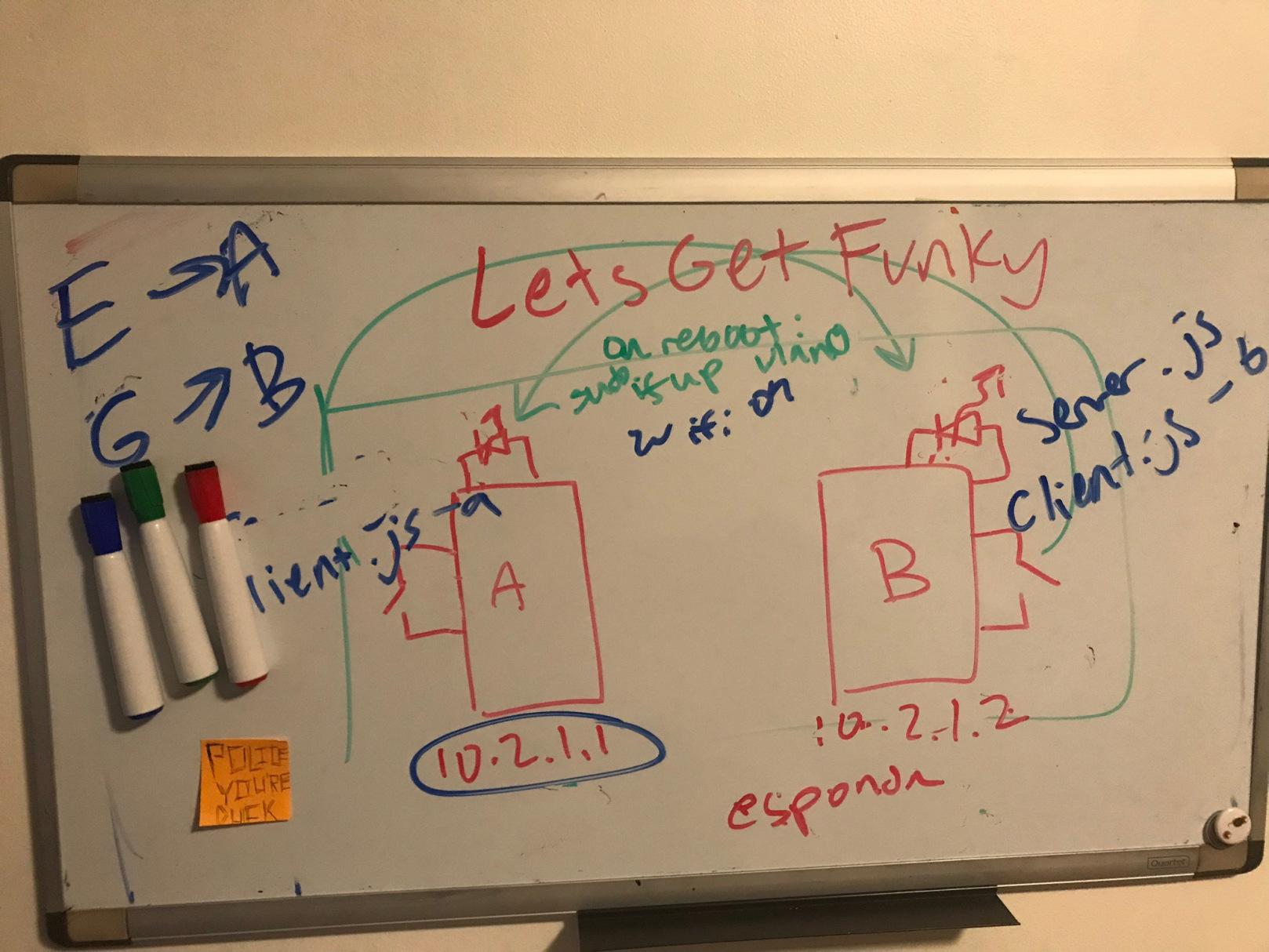 The server/client I wrote to test are simple. The architecture I set up is: The server is running on B (arbitrary choice). B and A are both running clients, which can update the server based on input to the Raspberry Pi. This models the ultimate architecture of the wearable I’m hoping to create: B is polling for information that A is providing, and A is symmetrically polling for information that B is providing. 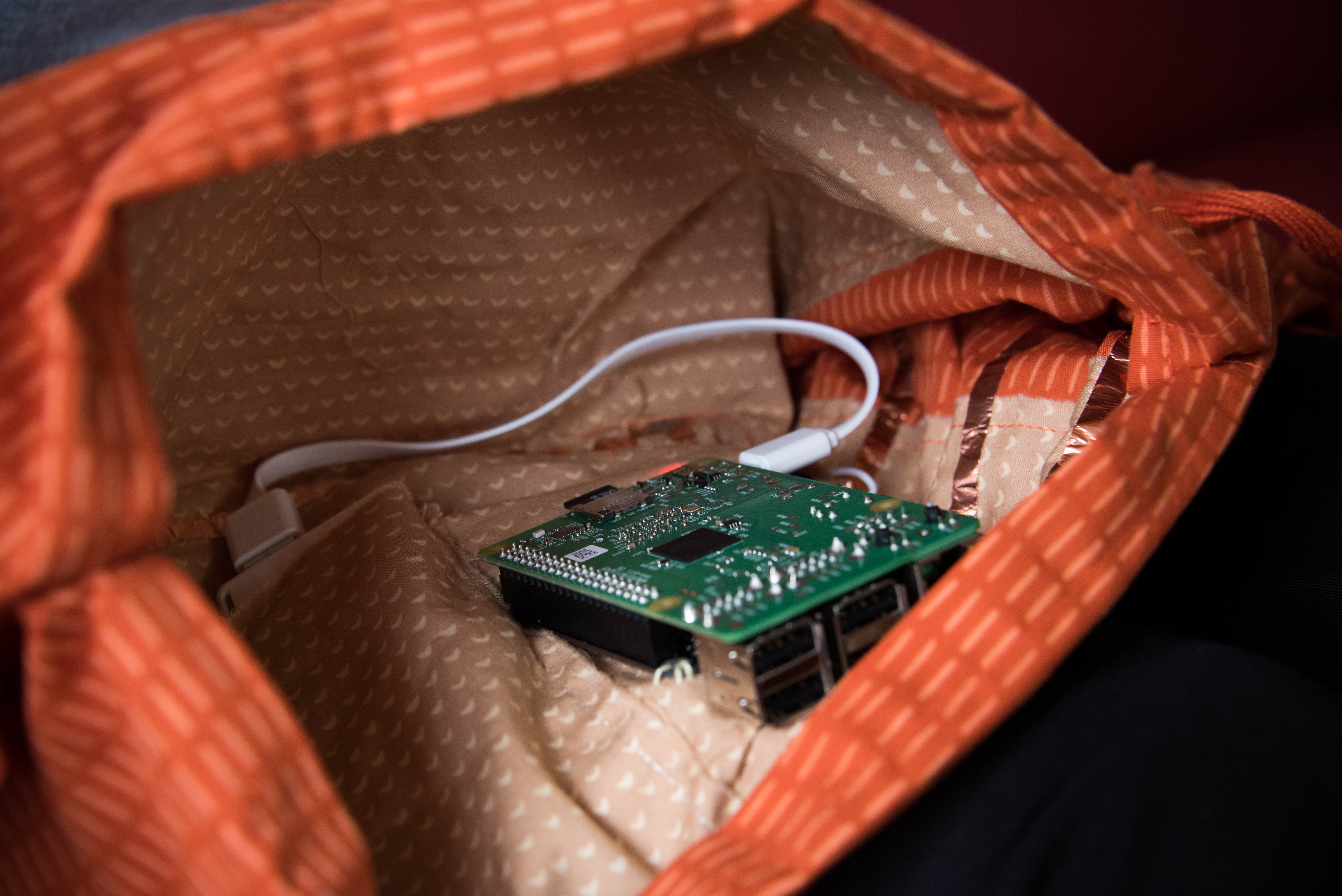 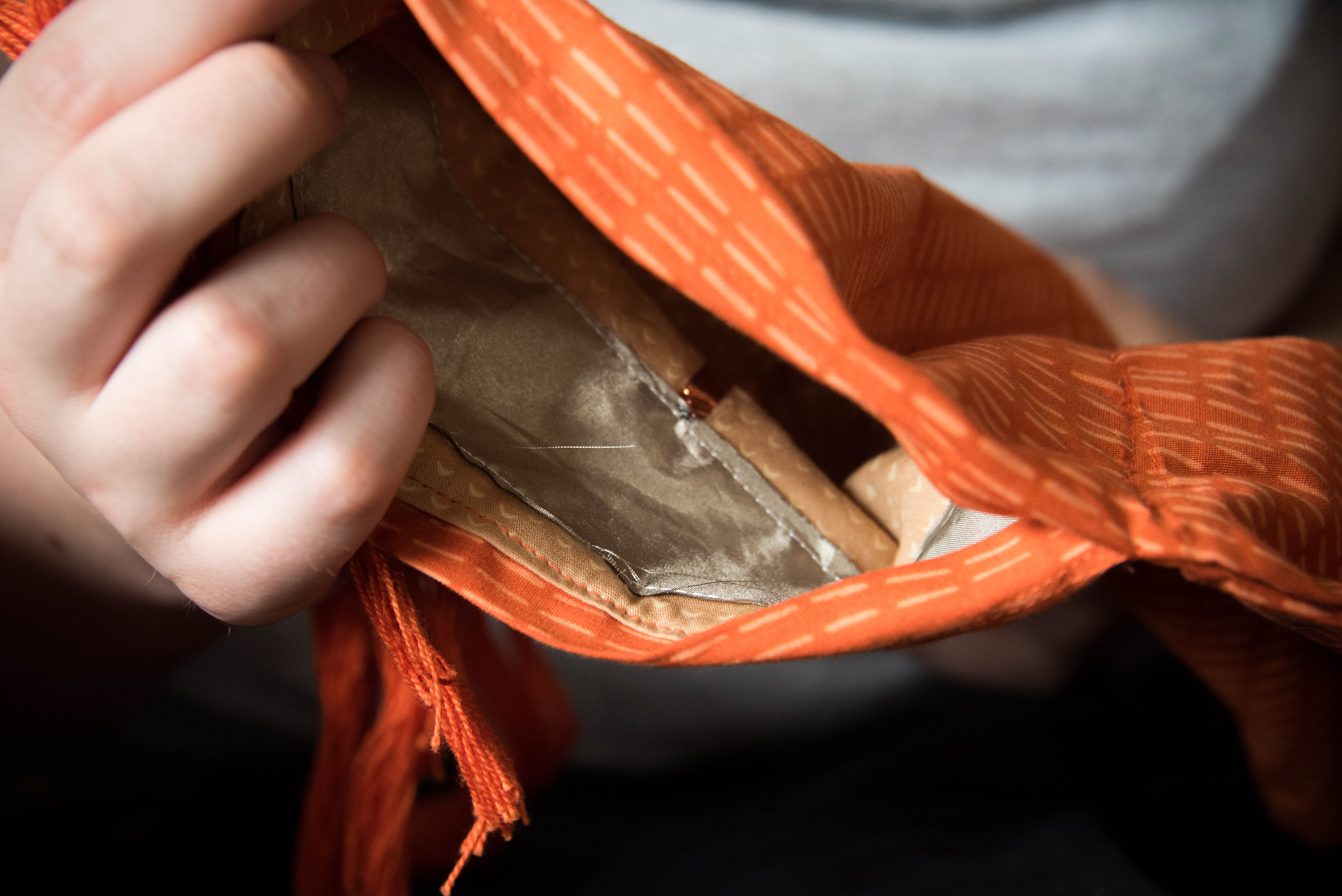 I learned to sew for this project, which was a first for me. I had done some work with wearables before, but it was always on readymade clothing, never on something I created myself. 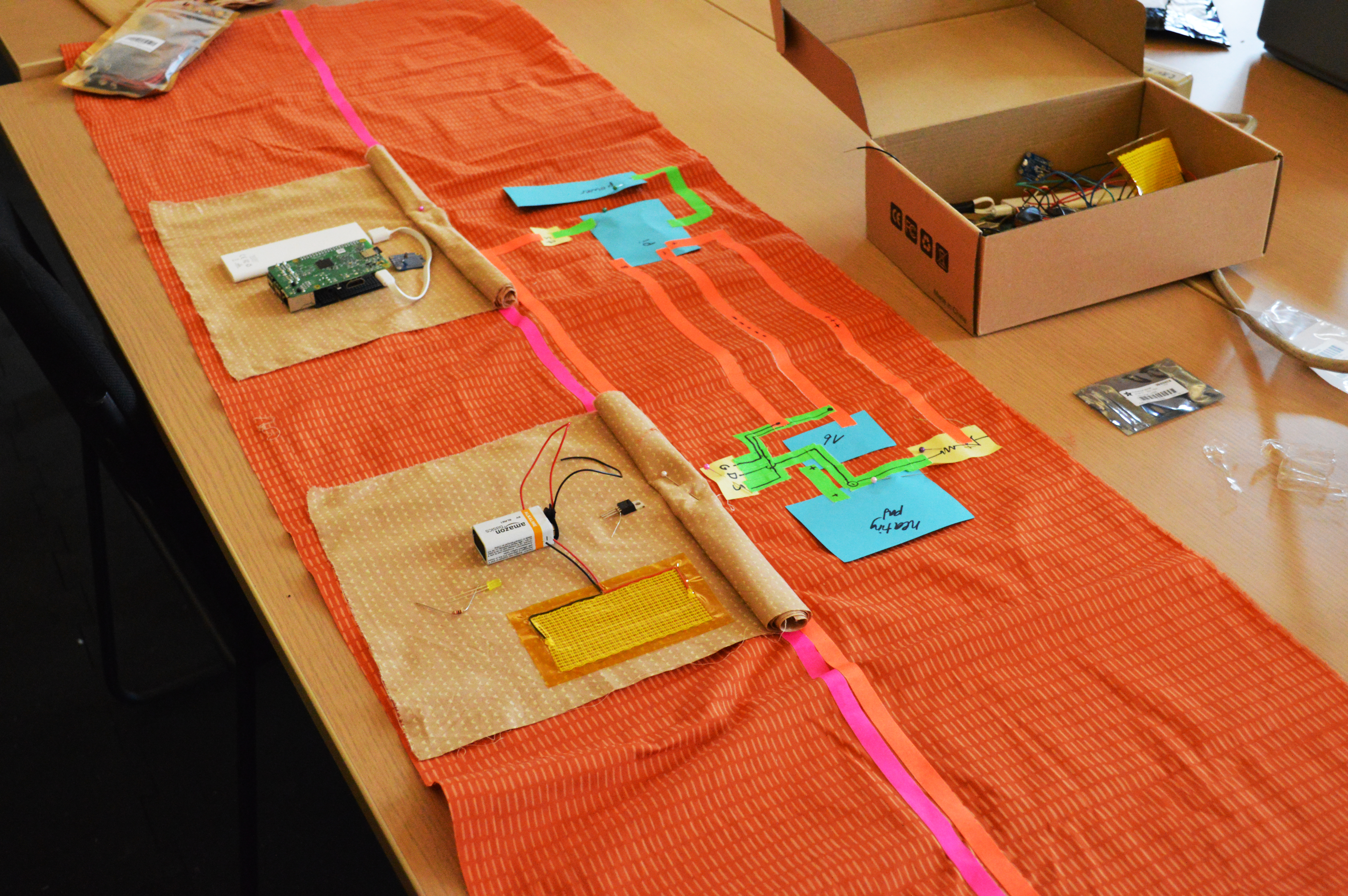 Working with wearables is a whole other beast than working with ordinary circuits. I had to consider the materiality, spacing, and layout in a way that I had never had to do before. My solution was to make a life-size diagram for myself before I ever started soldering connections. This way, I was able to be sure that I wouldn’t have any connections crossing over one another.

I had a whole fiasco with conductive thread, which caused me to abandon the idea of sewing my connections into the fabric. Instead, I opted to use wires in the electronics pockets, and have conductive tape running longer connections down the entire scarf. 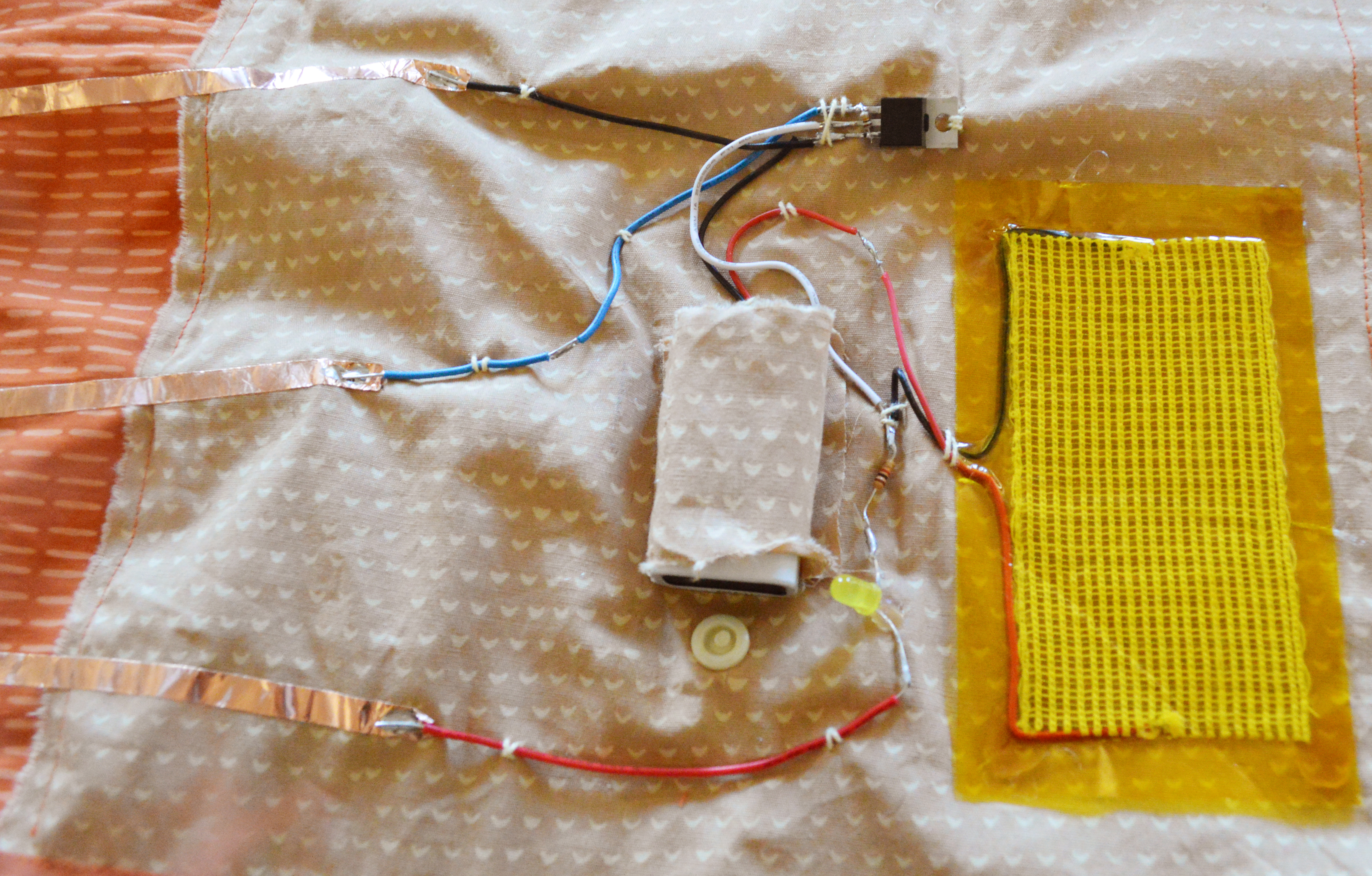 By developing wearables that distill attention down to a single gesture, I ask questions about what attention can mean in a romantic relationship. These scarves are partly a conceptual exploration into complex relationship dynamics, and partly an exercise in electrical engineering and physical craft.

Wearables are everywhere, and they are becoming more and more popular. The Apple Watch allows wearers to send one another their heartbeat. The Hug Shirt by Cutecircuit allows partners to hug each other from a distance. In these scenarios, what does it mean to send a heartbeat instead of a text, or a warm gesture instead of a phone call? How does that change the interaction? I ask how we can explore these abstract forms of communication to learn more about our relationships with one another. 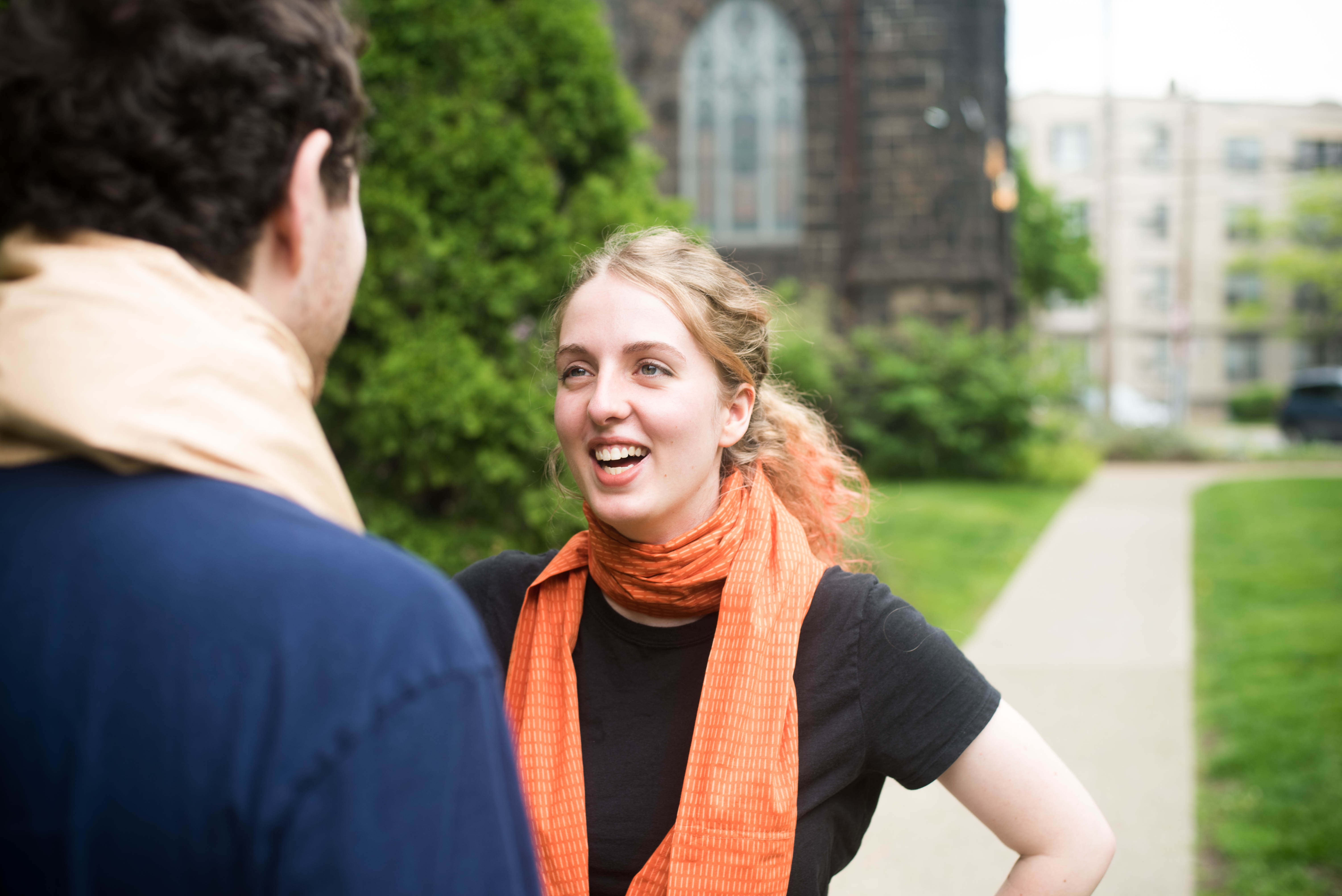 I came across other wearables projects in my research, and have pages and pages in my Capstone Blog about various other projects. I’m going to mention a few here that I particularly enjoyed.

Afroditi Psarra: Afroditi led a workshop at Eyeo festival, which was my first exploration into wearables and soft circuits. Her work is so elegant, and a refreshing departure from overly “high tech” looking wearables. 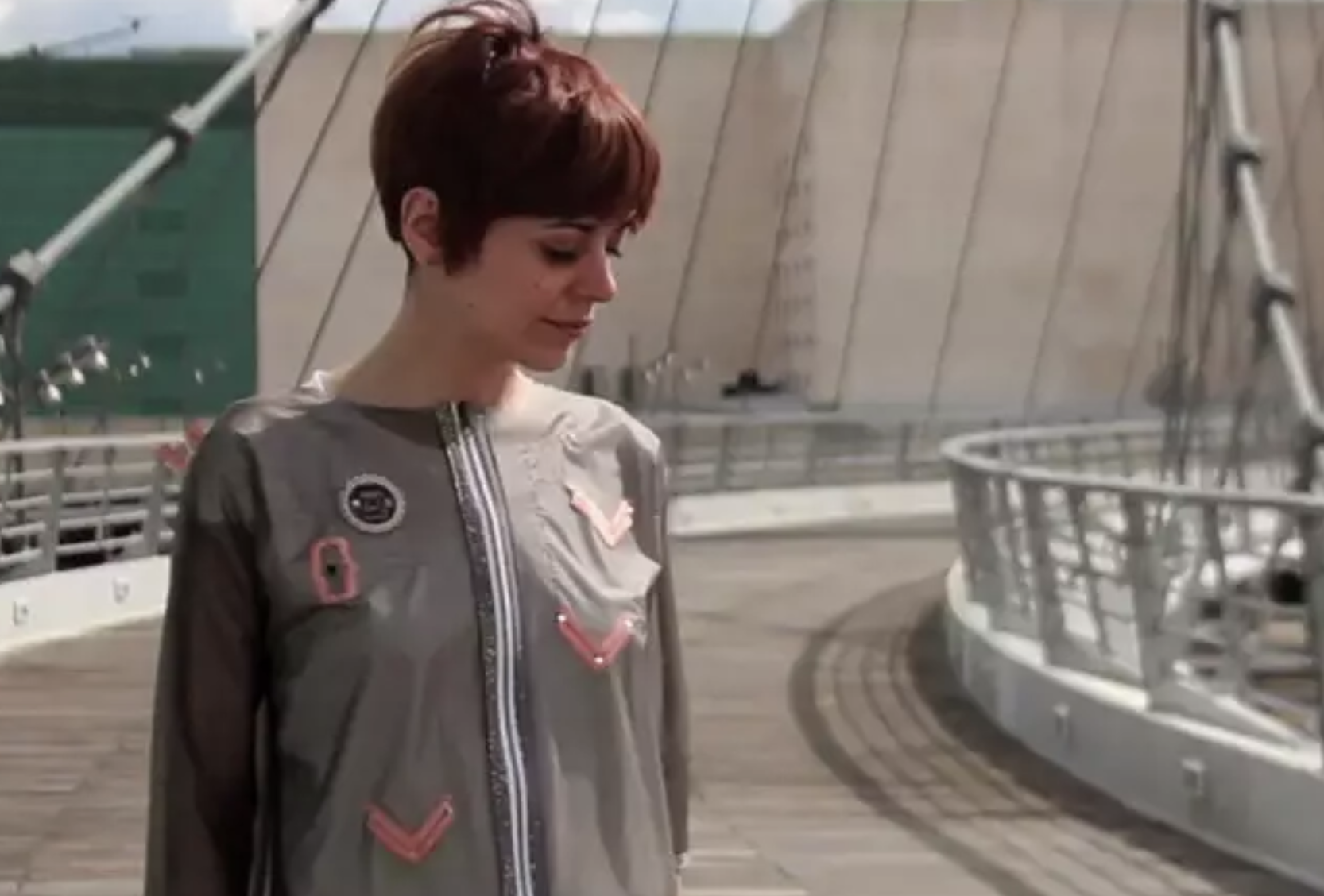 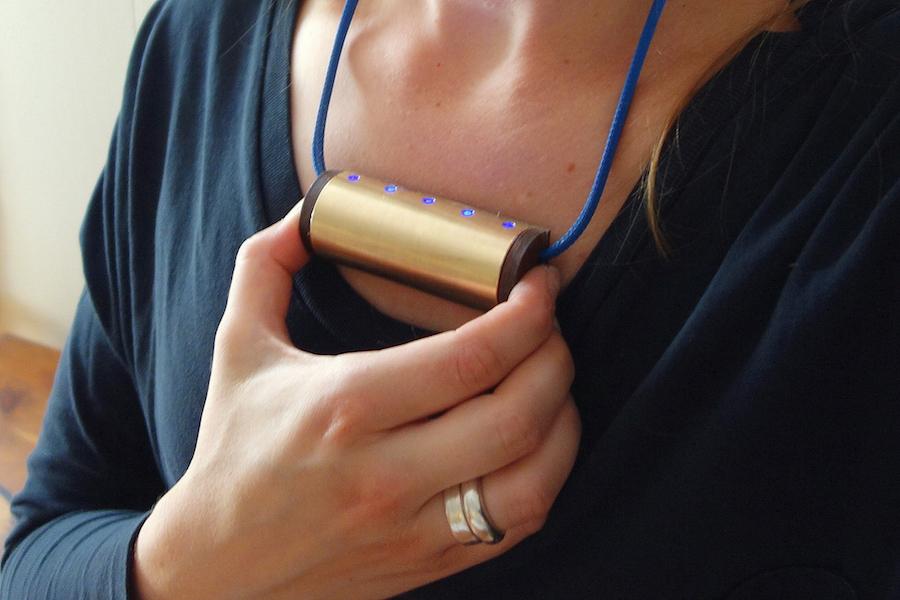 Cutecircuit: Cutecircuit develops The Hug Shirt, a wearable for hugging people from a distance. It is marketed as a product, though incorporates similar ideas of exchanging attention through clothing. 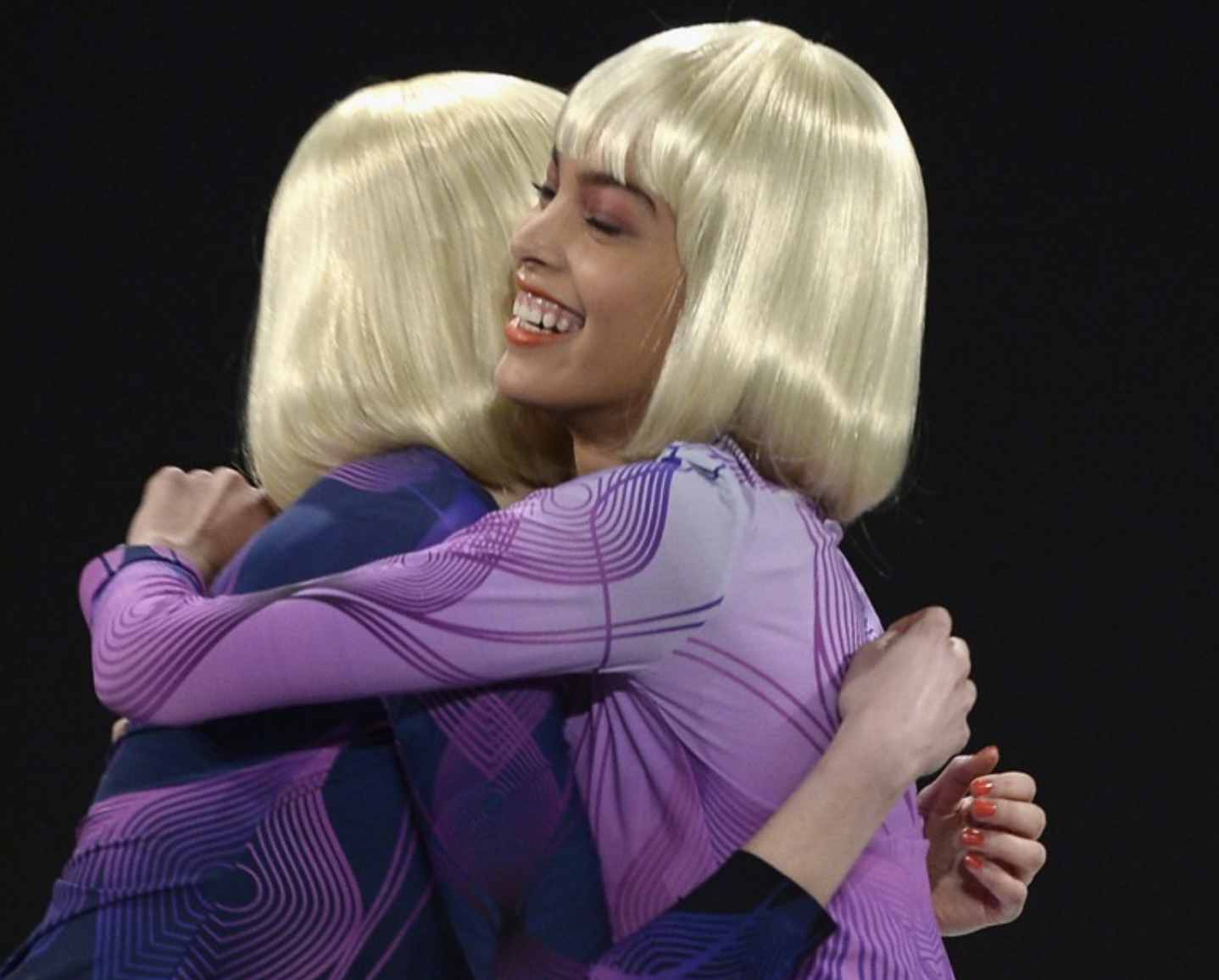 Molly Wright Steenson, for advising me

Avi Romanoff, for Raspberry Pi help and for modeling the scarves with me

Brianna Hudock, for helping a lot with the video

Golan Levin, for giving me space to work on this for his class

Tom Hughes, for knowing where everything is all the time

Nitesh Sridhar, for helping me find my way to conductive tape

Lauren McCarthy, for speaking with me about early ideas

Josh Brown, for taking this project to another level with photography and filming

Malaika Handa, for being in my video even though she was studying for finals

Boeing, for recognizing my project at Meeting of the Minds