I admire the work because of its emphasis on the interactions between players. Though it classifies itself as a game, I would say that the generativity is generated by the systems of the game to form compelling role playing interactions between the actors playing it, in the same way games as a medium do. I would qualify that games are a form of generative art, unmentioned by Galatner. The generativity is generated by interacting with the systems by the audience. Aesthetically, different sounds and images appear depending on the actions/inactions of the player, but this is not the magic of the game- the magic lies in the representations that take on new meaning through engaging with the system. The game is all about trading resources with markets, increasing your land, and dealing with randomly generated events. The map slowly generates in an array generated by the audience- the algorithm being driven by various variables like energy and money. The more the map grows, the more the tension increases, and that results in more and more interesting choices when engaging with the system. The artwork in a nutshell is an algorithm that attempts to make players make economic decisions based on algorithms that draw on supply and demand dynamics. Various states determine what actions can be taken. This fuels the game’s effective complexity. There are enough events that can happen to make interesting decisions be made- all without violence being taken. The game was designed by Danielle Bunten Berry, in 1983, while she was working for Ozark Softscape.

I couldn’t find a free working version of the game, so here is a full length version of the work: https://archive.org/details/C64Gamevideoarchive79-Mule. The game is available on the mobile app store. 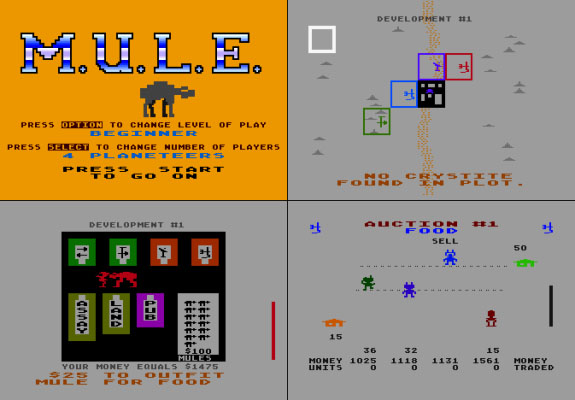