This LO post features two artists and continues the discussing the grey area between generative art and non-generative systems. 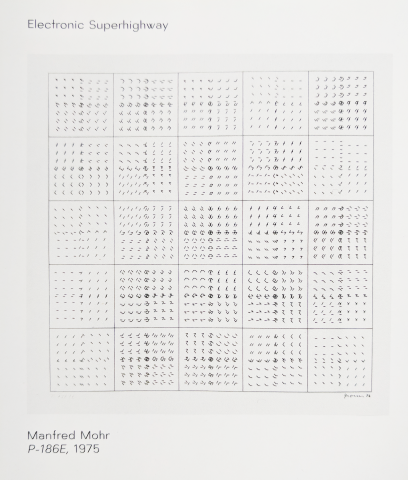 Manfred Mohr, a German artist was trained as a printer and jazz musician. In 1969, he published his first computer-generated book, Artificiata I. His approach to work is generating an idea, then splitting the idea into parts that can be assembled as an exectuable program.  His articulation of task separation is a first step in generative art. Once an idea is conceived, the processes for alteration can be understood as a system to execute the idea. In Mohr’s pieces, he follows a theme, similar to Sol Lewitt’s Variations of Incomplete Open Cubes, Mohr builds algorithms that create textures based on rules. This simple structure generates combinations of lines/form, but it cannot generate textures beyond the complete set of rules.

Liz Deschenes, a photographer, has two types of work that boarder generative art: moiré pattern print and camera-less photos. Moiré patterns are created from interference of two similar patterns (theyre often seen when two chain link fences overlap, when you take a photo of your computer screen, or the stairs by the brown chairs in the UC). Deschenes uses two layers of repeating dots, overlapped, for her Moiré series. These two offset-layers generate a number of shapes, lines, spaces, textures, etc. based on their misalignment. Although the artist has a lot of control over the final piece, she is constrained to the rules provided by the two grids of dots; the mathematical rules that describe the interference of the dots also describe the piece’s appearance. 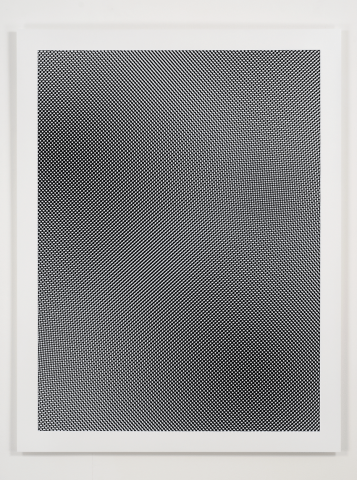 Deschenes also takes camera-less photos (her process is described a little bit in a video at the end). She sets up a photogram system, at night, within nature. She has little control over the final piece, but allows the atmospheric conditions to react with the paper’s surface. “Viewers are incredibly important to the work…they are the ones who make decisions about their vantage points.” -Liz Deschenes 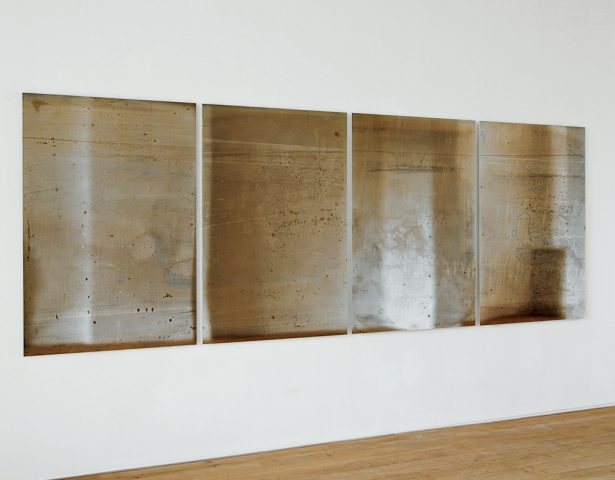 If a static system is designed, such as a moiré with separated layers, and the system allows viewers to choose a vantage point (which will change the interference), is the piece generating a new image for each individual perspective?

These images came from two books:
Electronic Superhighway by a collection of artists
Liz Deschenes by Eva Respini