As I mentioned to Prof. Levin earlier, I did not follow the standard Unity Essentials training; rather, I branched off to other more advanced tutorials. I ended up going through Lynda.com courses and taking a few, of which are documented below:

This tutorial was on custom tools in Unity. It was a good reference regarding using the Editor, so perhaps I may want to look into fancier subjects to actually put that to use.

Basically a walkthrough of an implementation of a path finding algorithm with no optimization. It was more of a demo of using scripts to suit alternative purposes than ones within Unity.

I felt a bit shaky on my knowledge of materials, which this tutorial brushed me up on. I also learned about light probes and post-processing, which may be helpful in an art-heavy scenario.

I had wondered about account management in the past, but never knew where to start. This tutorial not only opened my eyes to the process, but also walked me through how to do it. It might be pretty good for a multiplayer thing; I don’t think it’ll be very applicable to the class but it’s a fun thing to know.

I didn’t find any tutorials referencing the specific words “autonomous agent” but I think this tutorial came pretty close by introducing me to Unity’s native AI tools. It set up a scene from start to finish, then did some new and exciting things about AI. I would love to learn more in-depth about the subject, however, which did not happen in this specific tutorial. 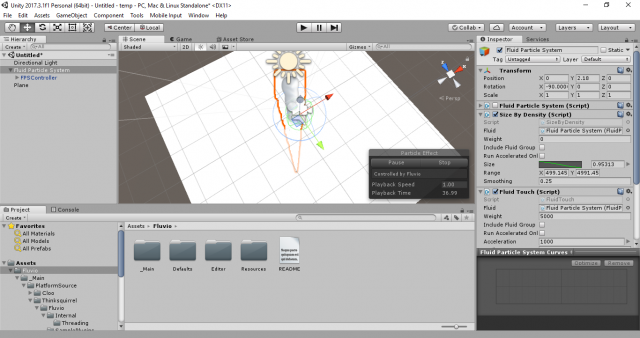 Fluvio experiments. Unfortunately the version was not quite compatible, but the fluid system worked somewhat. This was a personal experiment involving going through the documentation, and not an actual tutorial, but I am interested in simulations, so I wanted to explore that.