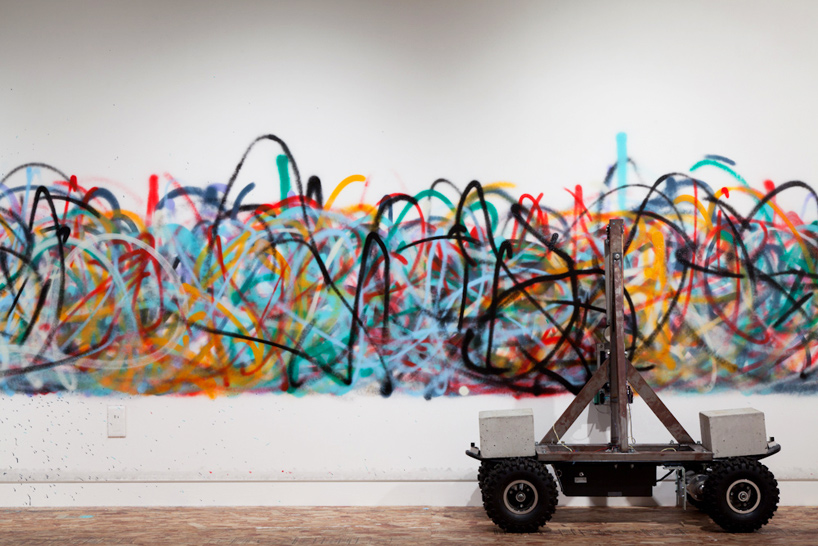 Senseless Drawing Bot by So Kanno and Takahiro Yamaguchi

The robot's movement is particularly interesting because of how out of control it looks. Despite this appearance, the robot is very much under control. Its movements are programmed such that it can create a maximum amount of movement in the arm. The robot controls its movement to simulate being very out of control. It plays with motion to raise questions about how much control the artist has over their art, and how much that control matters in the art that's being produced.

The piece definitely draws influence from abstract graffiti, looking at the street art somewhat for its form, but also for the process of vandalism. Vandalism, like the arm of the robot itself, suggest a lack of control in an environment with lots of control (the purposeful designs of man-made urban structures that often fall victim to vandalism). Six-Forty by Four-Eeighty is an interactive installation by Marcelo Coehlo Studio in which physical square "pixels" can be rearranged on a "screen." The pixels respond to a user's touch, and although each pixel is an independent computer, they can send signals to each other through the user's body.
I like this project because I really like squares, and I think that it is very visually successful. I also like this project because it creates a new mechanic for something that we are used to seeing daily (pixels). The project describes itself as "physically immersing viewers into an interactive computing experience," which is a pretty accurate description. I think that the most successful aspect of this project is that it created a new language/medium that can be explored infinitely.
Marcelo Coehlo Studio also made a sequel, Resolution, which has the same concept but with circular units. Personally I prefer the effect of the square pixels, but I think it is interesting that they chose to do it since it represents different forms of media (newspaper halftones and older television screens).

While researching and exploring ideas and methods for a Concept Studio 1 project, the professor introduced me to a work by Lea Albaugh. Her work Clothing for Moderns is an emotionally-reactive dress that responds to a lack of human interaction. It creates the image of the head of a person as a flower that blooms when cared for.

The flower is made of fabric in a pattern that can compress and uncompress. Wires push and pull the structure open and closed. It is not clear how the system is controlled technically. It may listen for a drop in sound level or simply be remote-controlled. The wires are most likely actuated by hobby servos.

I am drawn to this work because of the way that it represents an often hidden or private emotion externally. I explored this concept in my last Concept Studio project. Machines and even an external yet natural-appearing forms that represent internal emotions are uncomfortable for both the wearer (aka the embarrassed) and the viewer. Piece that use this concept are expressive and meaningful because they establish their meaning from the wearer. 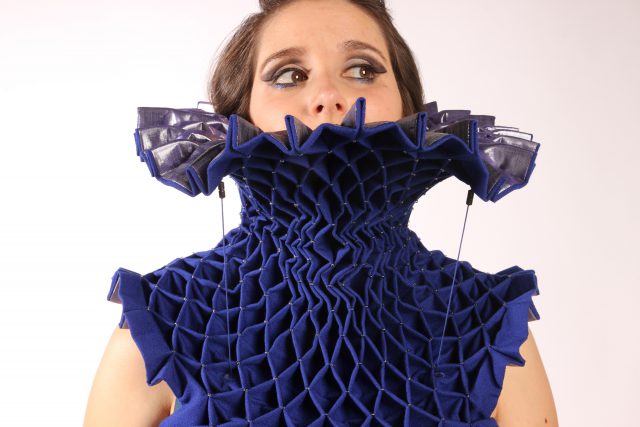 Clothing for Moderns by Lea Albaugh 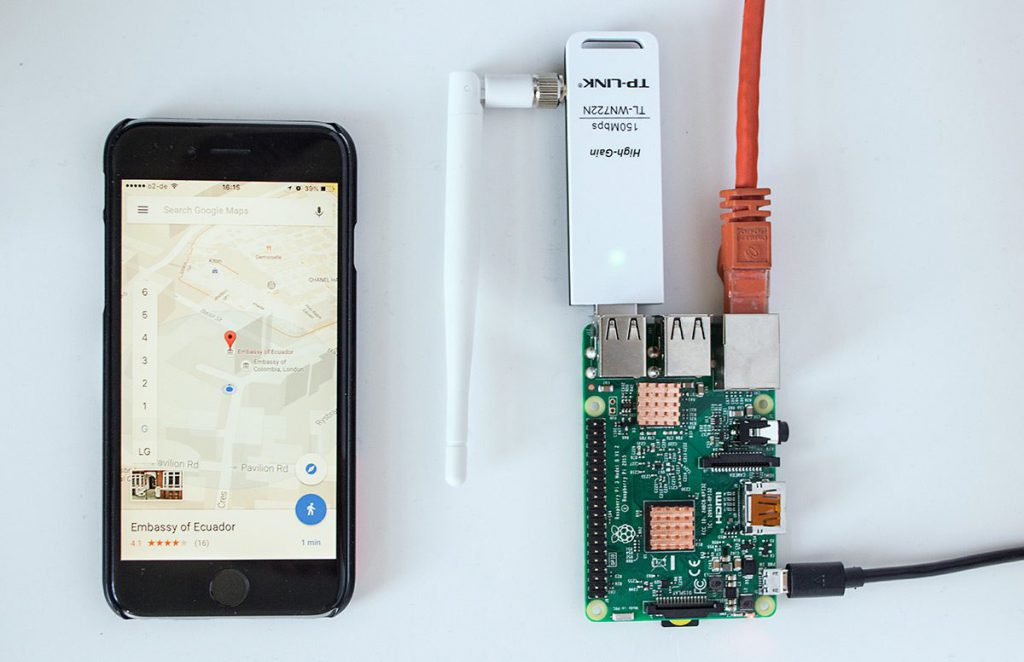 This is a project by Adam Harvey and Surya Mattu called SkyLift. It's a WiFi geolocation device that tricks user's phones into being at the Ecuadorian Embassy in London- the current residence of Julian Assange.  It broadcasts a WiFi signal that exploits the WiFi geolocation services of a cellphone. It mimics the MAC address used at the Ecuadorian Embassy, captured by the two collaborators from the street outside the Embassy. It uses a Raspberry pi and WiFi module and can be built for under $50, though Harvey has recently released plans for a second version that can be built for less than $5. All the software that runs on it and steps for setting up your own can be found on his GitHub.

The goal of this project, according to Harvey, is to call attention to aspects of the surveillance state; especially around the particularly charged aura of Julian Assange. In addition, the project allows you to disappear from a geographical location and appear at a completely different one- at least digitally. There's certainly an interesting combination created by the merger of the digital and physical in this project, both conceptually and literally. 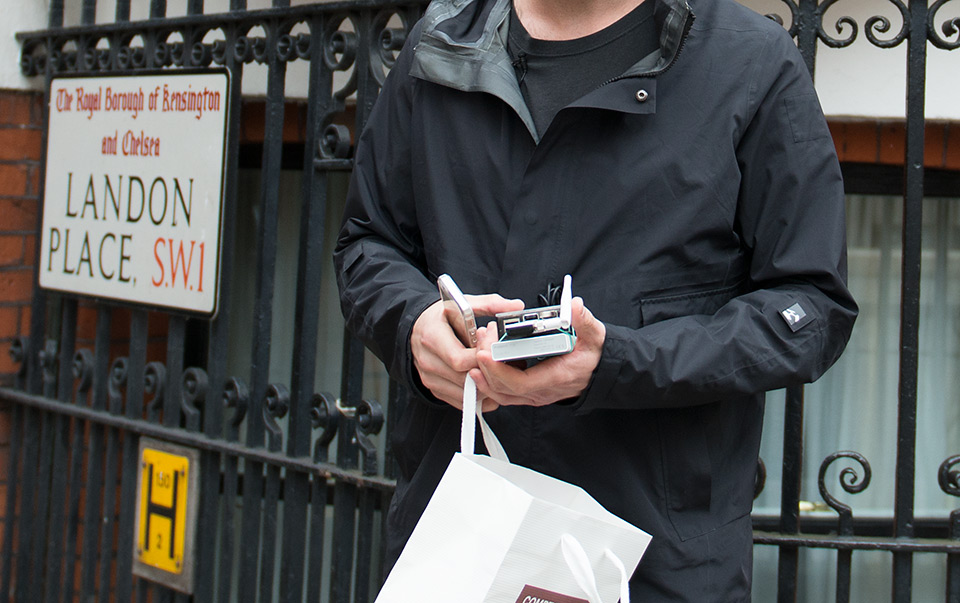 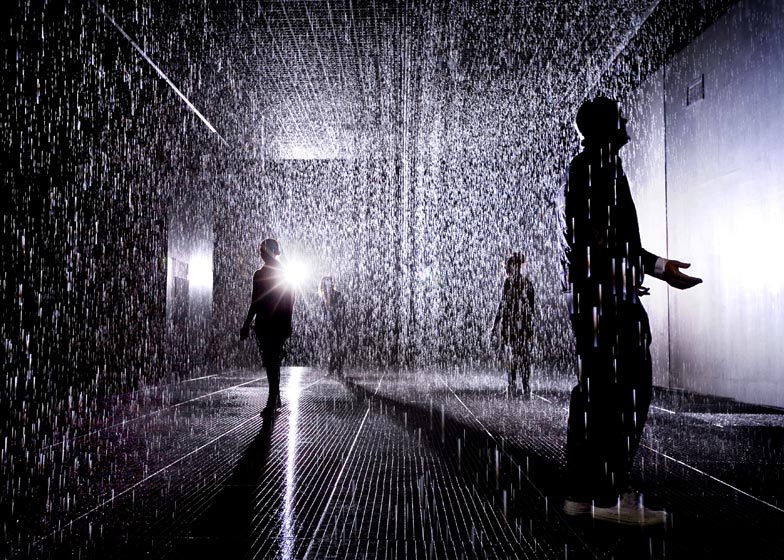 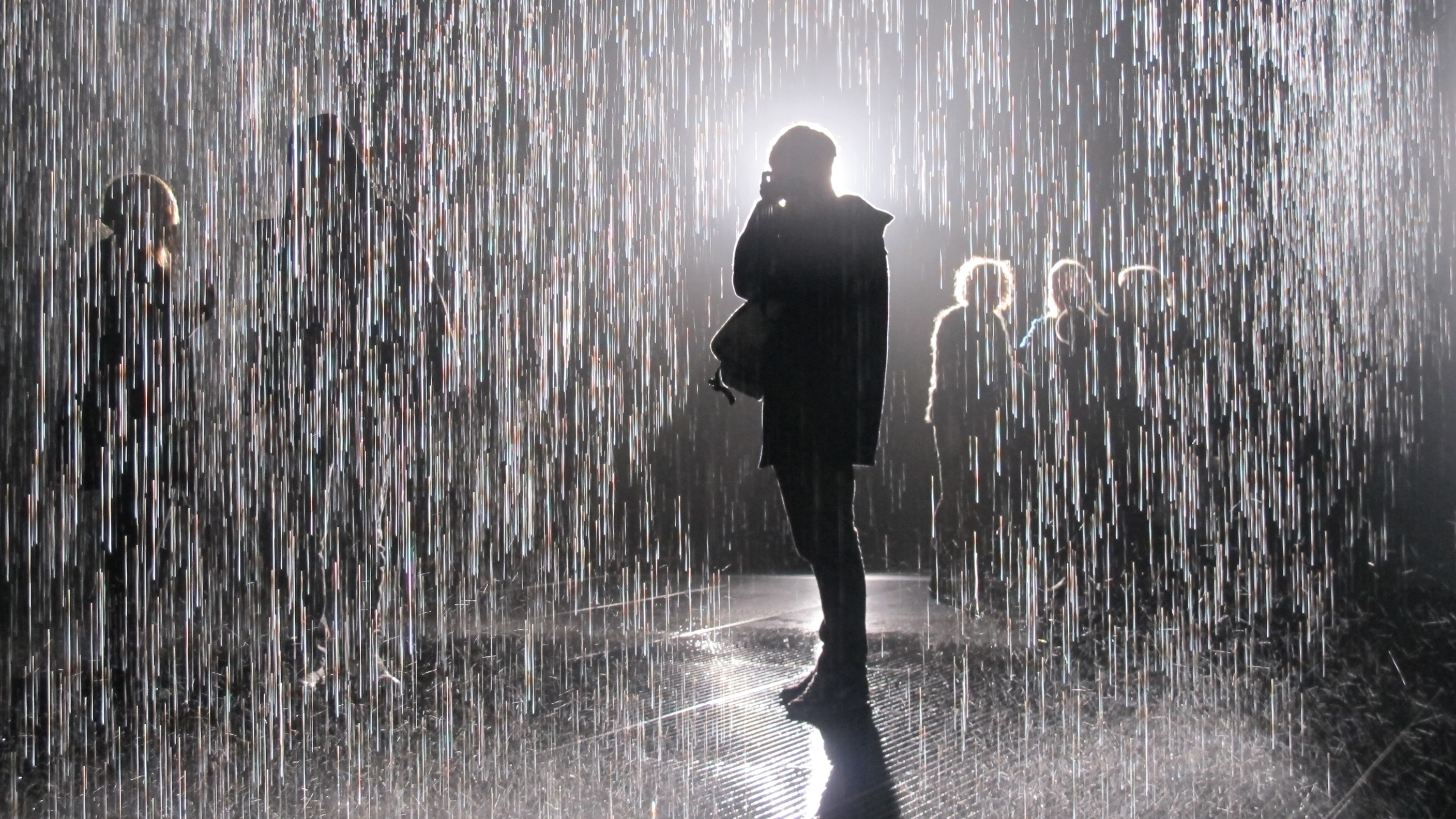 Rain Room is an installation by the artist group Random International in which rain falls from the ceiling and the presence of the human body stops the rain from falling. The simplicity of the concept and flawless execution really attracted me to this piece. Not only does it explore the materiality of the natural world, it explores our relationship through it in this absurd subversion of the roles. I feel this kind of work is especially curious in the context of present day environmental concerns, being that the work employs the natural subjugation of a natural process (rain) while also seemingly appearing unnatural in its minimalistic setting of the indoor gallery. The work employs all our senses, the smell of the water just as much a body of the work as the lack of water on the body is. It explores man's relationship with machine and nature simultaneously, extracting the essence of natural processes out of its machinations. Mediated Encounters is a project by Ken Rinaldo. It's composed of two hanging robotic arms with a Siamese Fighting fish on each end. The arms move based on the swimming pattern of the fish. These fish are naturally aggressive towards each other, so these arms allow them to get close but never close enough to actually fight.

I think this is an interesting project, like many of Ken Rinaldo's projects which connect fish and other living organisms with robotics to give them 'mobility' because it is sold as giving them a way to navigate our world freely outside the limitations of fish bowls. I see this method as somewhat contradictory and hypocritical, as the fish could easily move about the world if only they weren't trapped in fish bowls to begin with.  This is kind of like an exercise in power; these fish would have no way to interact on land without human help. It's like playing god to give them something they might not want or need ?

This project is very similar to the project at CMU with the fish that drove a robotic platform. Rinaldo also has a project almost identical to it, with three moving robotic fish tanks, but made it more than a decade earlier.

Pinokio is an expressive lamp by Adam Ben-Dror and Shanshan Zhou. The project centers around a lamp, which resembles the Pixar lamp, that has a very distinct personality and lots of interaction. For example, Pinokio is very curious and naive, which is implemented through the webcam with face detection software in the lamp shade. Although the concept and execution is simple, the project I think is charming and well executed. I was intrigued by the amount of personality conveyed simply through just a couple of motions. I feel like the project could be more effective if sound was utilized more intentionally, possibly by the tone the movement has depending on the motion it's trying to convey. Although their is a lot of influence they have drawn on and the concept of an animated lamp may not be completely novel, the execution and the initial curiosity towards it's personality was what intrigued me most.