Slitscanning as a visual effect has always fascinated me. Taking a standard video, slitscanning processes allow us to view motion and stillness across time in a completely new way. Moving objects lose their true shape, and instead take on a shape dictated by their movement in time. There is an immense history of this effect being taken advantage of by artists to create both still and moving works, but for my own explorations, I wanted to see the possibilities of slitscanning in stereo.

As an additional experiment, I processed the video not through a slitscanning effect, but through a time/space remapping effect. What happens when a video, taken as a volume, is viewed not along the XY plane (the normal viewing method), but along the plane represented by X and Time? This is a curious effect, but could it hold up in stereo video?

Using the Sony Bloggie 3D camera, I captured a variety of shots. For Cdslls, I chose to isolate her in front of a black background, for simplicity’s sake. I first ran the video through code in Processing, which would create a traditional slitscanning effect. In order for the slitscanned video to hold up as a viewable stereo image, the slit needed to be along the X axis, so the same pixel slices were being taken from each side of the stereo video.  I output this slitscanned video into AfterEffects, where I composited it with a regular stereo video. *1

With a process for regular slitscanning in stereo achieved, I began to wonder about the possibilities for stereo video processed in other ways. Video, taken as a volume, is traditionally viewed along the X/Y plane where TIME acts as the Z dimension; every frame of the video is a step back in the Z dimension. But do we have to view from the X/Y plane all the time? How does a video appear when viewed along a different plane in this volume? Here I explore a sterographic video volume as viewed from the TOP, that is, along the X/TIME plane. *2 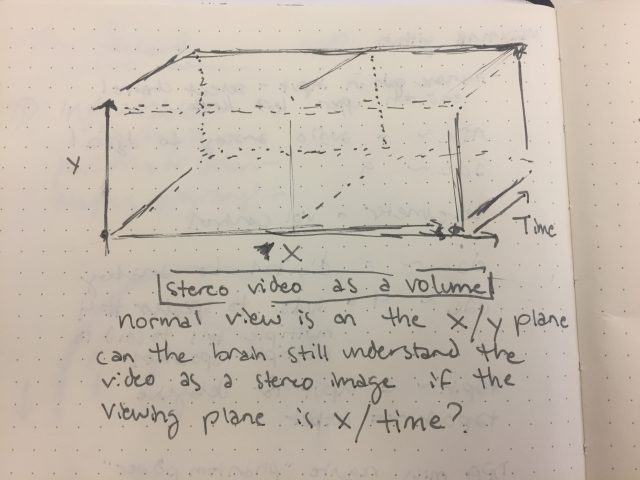 processing code for both the slitscanning and time remapping processes, using a sample video from archive.org (Prelinger Archives)

For display, I chose to present the video in the Google Cardboard VR viewer. Using an app called Mobile VR Station, the two halves of the images are distorted in accordance with the Google Cardboard lenses, and fused into a single 3D image. The videos are also viewable on a normal computer screen, but this requires the viewer to cross their eyes and fuse the two halves themselves, which can be unpleasant and disorienting.

One of the richest discoveries of these experiments has been seeing how moving and still elements of the input videos react differently to the slitscanning and time remapping processes. The “remapped time experiment 1” video shows this particularly well- still elements in the background were rendered as vertical lines, deep back in 3D space. This allowed a pleasing separation between these still elements, and the motion of the figure, which formed a distinguishable 3D form in the foreground. I would thus like to continue to film in larger environments, especially outdoors, which contain interest in both the foreground and the background.

I would also like to further refine the display method for these videos. Moving forward, I’ll embed the stereo metadata into the video file so that anyone with Google Cardboard or similar device will be able to view the videos straight out of YouTube.