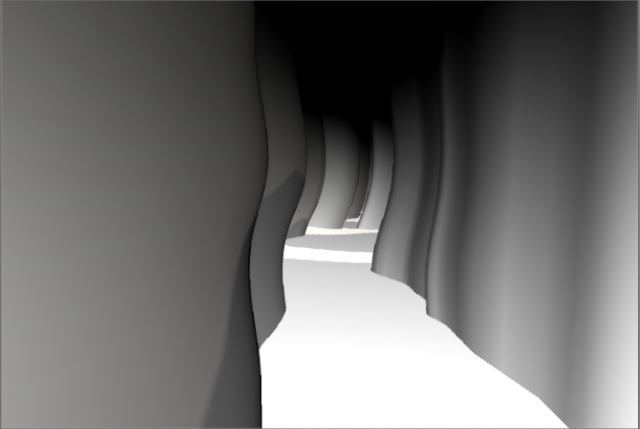 I decided for my portrait to create a maze out of my subject’s fingerprint.  I took her fingerprint by a normal ink pad and paper.  I then scanned it at a fairly high DPS.  I took that and slowly in Rhino traced with vector every single line and mark. After making all of these closed curves and giving an outside edge, I extruded these curves as a group to create a maze like design.  I had wanted the floor to be curved on the bottom so it would look like you were in the groove of the fingerprint, however this was much more difficult than I had thought.  Traditional lofting and filleting were behaving strangely on this many objects.  After spending a long time on this, I decided that I could get a more wavy effect in other ways, so I decided to use a vert shader that twisted the view of the camera, instead of changing the mesh.  I made the floor white while the ceiling black, so that it would be like if you were stuck inside of the actual ink print.

I tried multiple different techniques before this, including doing some using the ink scans as height maps to put into the terrain editor and doing various simple image processing sketches in processing.  I considered doing photogrammetry, but I wanted to explore methods of capturing that I hadn’t tried yet.

I was primarily inspired by the idea of hedge mazes and the lines of sand dunes.  I wanted to pose the question of could a fingerprint be a solvable maze? What would be the goal? To get to the outside or the inside?

Although this project is not what I had planned, I think it may get interesting results.  I am not very good at judging success immediately after making something.  I need time to process it.

I wanted to explore a very personalized thing (a fingerprint) is actually very abstract and how doesn’t truly tell a lot about who the person is. It is a portrait, but it tells you almost nothing. It is completely unique to my subject, just as her fingerprint is, although this could be recreated for anyone (similar to the normal process of fingerprinting).