The kinect presentation last week by James George and Jonathan Minard made me start thinking about all the old school sci-fi novels I’ve read, so the idea for my interactivity project is unsurprisingly inspired by one of my favorite books, The Demolished Man by Alfred Bester (1951). I’ve always found the book extremely clever, both in its ideas and in its execution—particularly when it comes to Bester trying to depict what communication via Telepathy would look like in textual representation. Take this passage, for example.

I completely loved idea that people talking with their minds would somehow translate differently in space and time, when compared to normal speech. It not only made the book more engaging, since every page felt like a puzzle, but it also made me wonder about different ways you could represent normal party conversation in a way that better captured its overlapping chaos, serendipitous convergences, and trending topics.

So, with that said, enter my idea: The Esper Room. (‘Esper’ is the term for a telepath in the novel…) 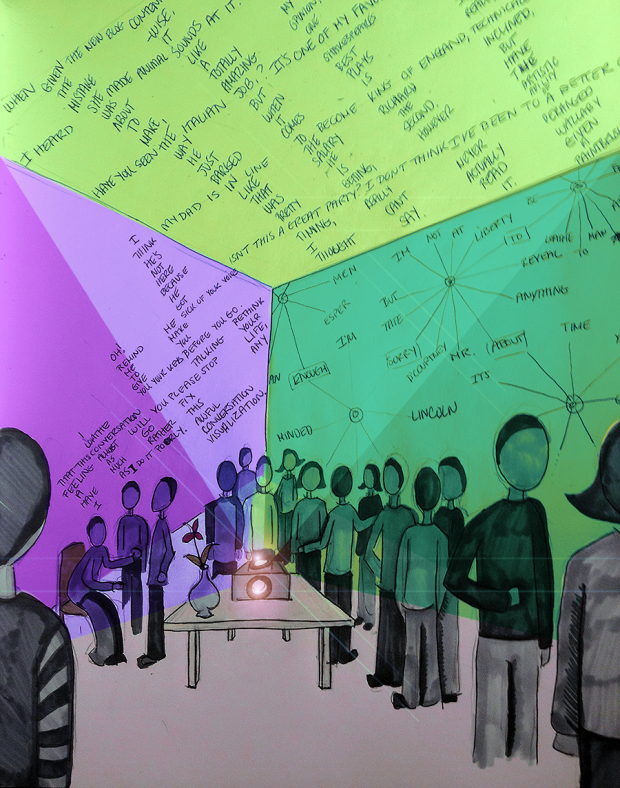 I’d like to create a room where everybody entering is given a pin-on microphone adjusted to pick up their voice only. All the microphones would feed into a computer, where openFrameworks or Processing would convert the speech to text and visualize the words according to some pre-selected pattern (“Basket-weave? Math? Curves? Music? Architectural Design?”). Recurring words and phrases would be used as the backbone of the pattern, and the whole visualization could be projected in real-time onto the walls or ceiling of the room.

Aside from being a nifty homeage to 1950s sci-fi, I think this could be an interesting way to realize that people on opposite sides of a party are actually talking about the same topic. Maybe it could bring together the wallflowers of the world. Maybe it could cause political arguments, or deter people from gossipping. In a way, the installation would be like pseudo-telepathy, because you could read the thoughts of people whom you normally wouldn’t be able to hear. I’m interested in seeing if that fact would have a substantial impact on people’s behavior.