In this exercise, you will author code to produce a parametrically-defined object.
We will be using OpenSCAD — a programming language for solid CAD objects.
Thanks to Martin Schneider (@bitcraftlab) for the inspiration for this assignment.

Terms.
A parametric object is a “meta-form”: a mutable object, produced by a set of rules, whose properties are governed or articulated by the values of certain variables or parameters. Change the values of the variables, and the form changes in response. Generative design is the activity of authoring such rules (i.e., the code) that generate parametric objects.

Learning Objectives.
Upon completion this exercise, you will be able to:

Inspirations I: Parametric Objects in the work of Jason Salavon

Let’s consider parametric objects in the work of computational new-media artist, Jason Salavon, who has created some generative forms that are both beautiful and provocative. Here is Salavon’s ambiguously suggestive Form Study #1 (2004), a near-infinite collection of generated objects designed to tickle the eye and, perhaps, the body. (Also see the online “toy version“): 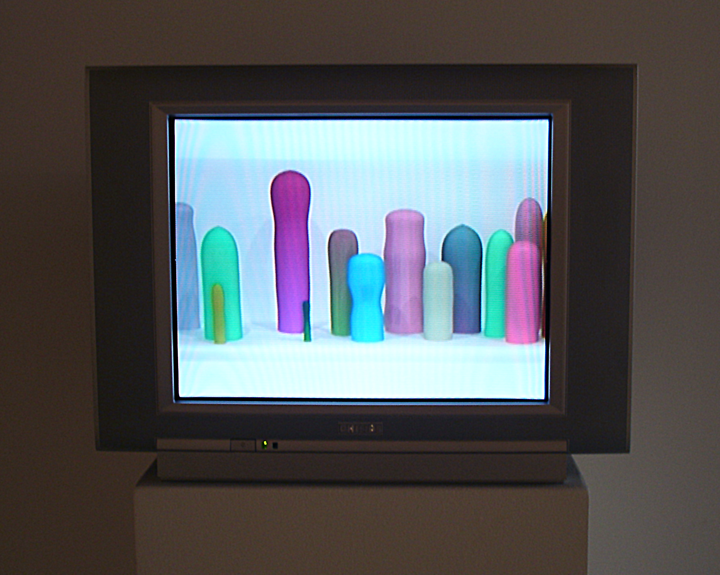 In 2007, Salavon created a photo-realistic “dynamic painting” of parametrically-modifiable glassware, in his Still Life II (Glassware). Note that the documentation video below is significantly accelerated; here it is shown at 50x speed. In ordinary observation, the changes would be almost imperceptible:

More recently Salavon has made a parametric mammal skull, in his Still Life (Vanitas), 2009: 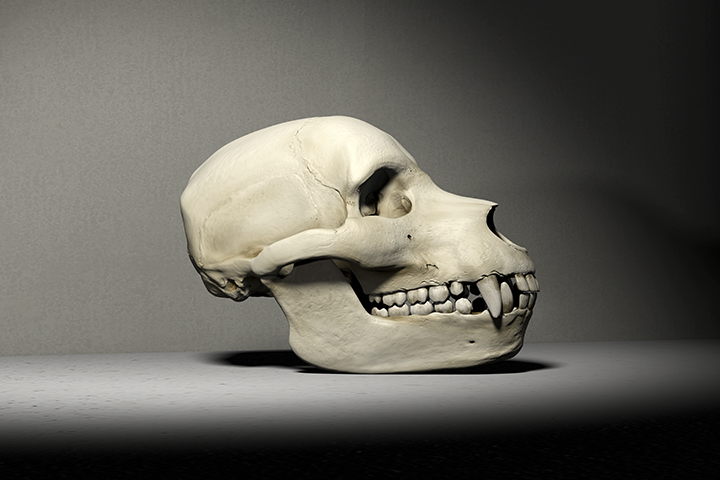 The above example is sped up 500 times (1 second becomes nearly an hour), revealing the subtle transformations that take place over the course of days. Jason Salavon’s work is produced at a high level of craft. Apart from their surface beauty, however, what makes these works interesting, memorable, or provocative? What strategies does Salavon use to do this? What visual languages does he engage?

Algorithmic strategies for form generation are widely used in architecture, industrial design and the decorative arts. We will assuredly be delving into this much more substantially later in the semester. Rather than attempt to consider this comprehensively at the moment, let us instead ‘go narrow’, and examine just a couple of case studies in decorative and utilitarian objects. First: here are two different approaches to the design of parametrically defined jewelry. Both are browser-based web services that allow user-customizable ring designs to be fabricated by direct digital manufacture. 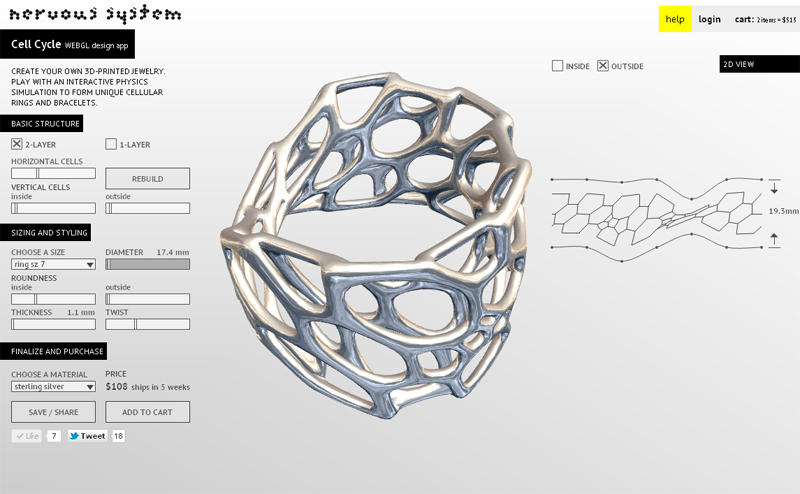 It is worth pointing out that Nervous System is (just) a two-person company, Jessica Rosencrantz and Jesse Louis-Rosenberg. Both are designer/coders with strong mathematics backgrounds.

In a more utiltarian vein, pushing the limits of what can be achieved with today’s 3D printers, Amanda Ghassaei has developed Processing code (and this Instructable) to generate CAD models for 3D-printed “vinyl” records from any audio file:

Finally, an example of my own, a parametric system for generating rubber stamps from any logo, extensible to wheels and (even) shoes:

Generative art and design are large fields with many different approaches, and many tools that support different objectives and workflows. Widely-used algorithmic modeling environments include Processing , PLaSM, and Grasshopper. For the purposes of this assignment, we will constrain ourselves to the use of OpenSCAD, a C-style scripting language and CSG compiler.

OpenSCAD is free software and available for GNU/Linux, MS Windows and Mac OSX. It provides two main modeling techniques: First, constructive solid geometry (CSG) and second, extrusion of 2D outlines. Autocad DXF files are used as the data exchange format for the 2D outlines. In addition to 2D paths for extrusion, it is also possible to read design parameters from DXF files. In addition to reading DXF files, OpenSCAD can also read and create 3D models in the STL file format, which is commonly used for 3D printing.

OpenSCAD is ideal for creating parametric objects, such as a chain that can have any number of links, or a snowflake ornament with a changeable pattern. Here, perhaps, is the simplest and most introductory example, a customizable box: http://www.thingiverse.com/thing:72070.

OpenSCAD has been used to create a variety of useful parametric objects: 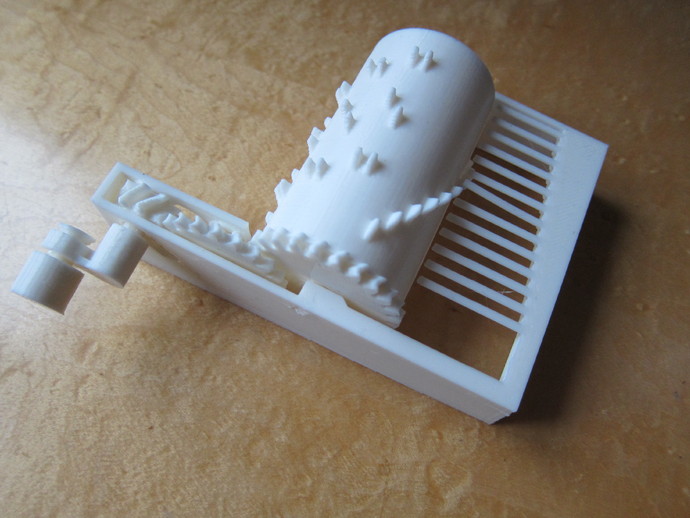 It has also been used to create a variety of more fanciful and whimsical ones.

If you enjoy information visualization, it is also possible to use OpenSCAD to generate sculptures that represent data. Below is a 3D-printable “prism map” of the USA; given a data file representing data for each state (e.g. population, number of Starbucks, etc.) a different sculpture is generated: 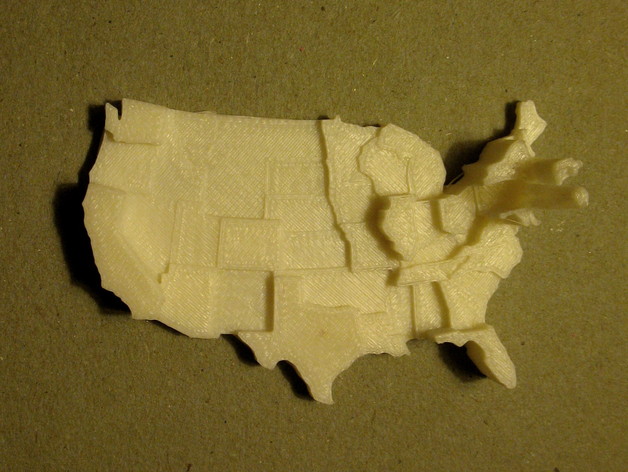 OpenSCAD models can be imported into MakerBot’s user-oriented Customizer software, which exposes OpenSCAD variables as sliders in a browser-based GUI for easy shape generation. (In other words, it serves as a front-end GUI for your code.) Here are some galleries featuring more examples of parametric OpenSCAD objects, many of which are associated with Customizer:

Create a parametric object in OpenSCAD.
Per your inclination, choose 2 of the following 3 goals: {Beautiful, Interesting, Useful}.
Disrupting the depersonalizing effects of mass production can be liberating. If you are hunting for a concept, it may be helpful to think of things in the world around us which are mass-produced, but which could be personalized.

Give consideration to the potential of your parametric object to operate as a cultural artifact. How might it somehow attain special relevance by generating things which address a real human need or interest? Does your generative object have a perspective? Is it possible for an object to be critical? Tactical? (What could those terms mean when applied to generative objects?) Can it be funny, surprising or unexpected? (Remember, you can import any .STL file… yielding some potentially insane mashups.)

Here are some guidelines:

Quick Checklist.
As a recap, your blog post should present all of the following: