Hey there, my name is Austin McCasland, and I am a current student in the Master of Human Computer Interaction at the HCII.  My background is mostly in interactive sculptural work.  I am currently very, though not exclusively, interested in bringing media out of the screen and into the real world.  I am hoping that this class will strengthen my portfolio with some beautiful data visualizations, and interesting experiments in unusual ways of representing that data.  I am hoping that I can leverage the expertise of the people in the class, and learn enough to where I can confidently approach data visualizations of all shapes and sizes. 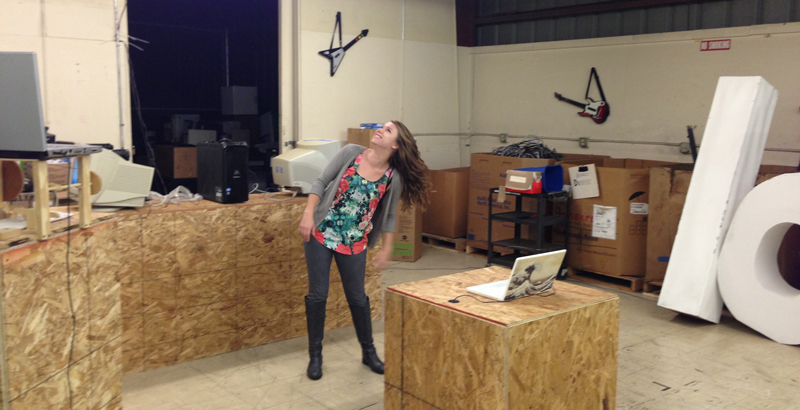 Sound Room is a CV piece which uses an IP webcam mounted on a beam in the roof of a hangar to track the locations of movement in the room and play sounds which vary in shape and tone depending on where within the exhibit the movement is. In the video you can also see a few of my other pieces – though these are all are part software, part sculpture. Everything in this show was made from recycled computers and components. I think that the piece was very successful – the goal of it was to create an presence which was impossible to ignore in the room as you explored the other pieces in the show; it was meant to infect the perception of the entire space and the pieces within it in an uncomfortable way. The intent of the show was to create undesirable interactions with computers using each of the three sculptures, and the irritating sound that the viewers themselves were responsible for made their experience of the show that much more grating. I think that this piece fell short in an over saturation of tones. It was supposed to feel like every time you moved you created more/new sounds, but when a bunch of people got into the space it just sounded like a screaming banshee and an individual’s movement didn’t affect the overall sound in a noticeable way.