My name is Kevan Loney. As an introduction, I’ll give you folks a little background on who I am and where I came from. I’m a MFA Video & Media Design Candidate 16′ within the School of Drama. I little while ago, I graduated with a B.S. in Visualization from Texas A&M University (TAMU). The Visualization program is a fairly new program under the College of Architecture at TAMU. This program exposes it’s students to a broad range of topics such as art, animation, graphic design, and interactive visual programming. At the end of the program you can begin to chose the track of topic you want. I fell somewhere between interactive art and animation. During my education at TAMU I began to have withdraw syndrome from my other love in life, theatre. So I began to gear most of my projects at the university to be performance based or inspired. The summer before I graduated I got my animation accepted to be presented at the SIGGRAPH “Dailies!” 2012. During of which I ran into several Carnegie Mellon students who found out that I was interested in theatre and tech. They told me about the brand new VMD program at the School of Drama, and I knew right then it was to be the next step in my journey!

One semester down and the second one is just beginning! All I can say is that it has been the best decision of my life. I could not be happier to be at this school learning from/with some of the brightest/creative people around. I look forward to getting to know everyone in this class and getting my feet wet in the life of coding. I’ve had some coding in the past but recently have been focusing on platforms such as Touch Designer and Max/MSP/Jitter. So returning to pure coding after after a year or so shall be an interesting task that I’m excited to take and see what comes of it. I hoping this class will allow me to make more customized interactivity for the stage and live performances to enhance how the viewer experiences live entertainment.

Below is a bit of my work.

This was my first full production called THE NINA VARIATIONS! It just recently wrapped up in November! In this show, 90 percent of the visuals were live generated through Touch Designer and outputted through Millumin. We had embedded live cameras in the set on stage along with cameras backstage in a make-shift live film shoot within a small hallway behind the theatre. These were being live outputted/manipulated through TD on a PC and sent to a separate Mac Pro to send out projections for mapping and masking along the set. In addition, preview monitors were put backstage so that the actors could reposition themselves with the set. It was quite the task, and a crazy first production, but I loved every minute of it! 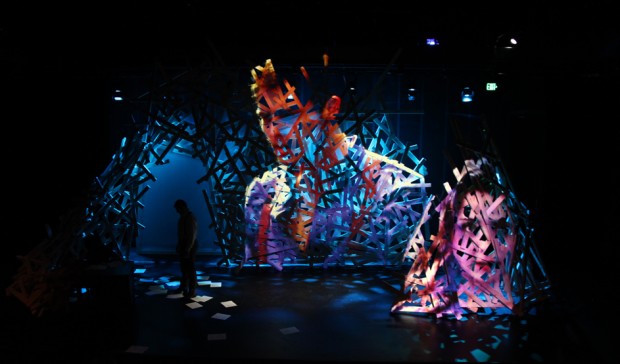 This is my Demo Reel with short segments of my work at Texas A&M before coming to CMU. I think it may be time to update soon. ;)