Overview
“Euphony” is a pair of telephones found in an antique shop in Pittsburgh. Through the use of an Audio Recording / Playback breakout board, a simple circuit, and an Arduino, the phones were transformed into peculiar sculptures which investigate memories in the form of sound. The red phone is exclusively an audio playback device, which plays sound files based on phone number combinations, while the black phone is a playback and recording device. Together, these ‘sound sculptures’ house echoes of the remarkable, the mundane, the absurd, and sometimes even the sublime.

A Longer Narrative
One day I was sifting through old pictures in my phone, and as I was looking through them I had a strange feeling of disconnect between myself and the photos. While the photos evoked a sense of nostalgia, I was disappointed that I was unable to re-immerse myself in those points in time. It was then that I realized how a photograph may be a nice way to preserve a certain moment of your life, but it does not allow to you actually ‘relive’ that moment. Afterwards, I tried to think about what medium would be simple, yet effective for memory capture that is also immersive. Then I thought, “if visuals fail, why not try sound?”–which prompted me to browse my small collection of audio recordings. As I listened to a particular recording of me and my friends discussing the meaning of humor in a noisy cafeteria, I noticed how close I felt to that memory; it seemed as if I was in 2012 again, a freshman trying to be philosophical with her friends in Resnik cafe and giggling half the time. Thus, I was motivated to make something that allowed people to access audial memories, but in a less conventional way than a dictation machine.

I chose the telephone because it is traditionally a device that accesses whatever is happening in the present. I was interested in breaking that function and transforming the phone into something that echoes back something in the past. As a result, I made it so that it would play recordings that could only be accessed through dialing certain phone numbers and wrote down the ‘available’ phone numbers in a small phone book for people to flip through. This notion of ‘echoing the past’ was incorporated in the second phone, but in a slightly different way. While the first phone (the red one) had the more distant past, the second phone (the black one) kept the intermediate past. With the black phone, I wanted to explore the idea of communication and the indirect interaction between people. I made the black phone into an audio recording and playback device, which first plays the previous recording made and then records until the user hangs up the telephone. All the recordings have the same structure: a person answers whatever question the previous person asked and then they ask a different question. I really liked the idea of making a chain of people communicating disjointly with each other, and since the Arduino would keep each recording I was curious to see whether the compiled audio would be not so much a chain as it was a trainwreck.

People responded very positively to the telephones, especially the second one. To my surprise, there were actually people outside my circle of friends who were interested in the red phone despite it being a more personal project that only had recordings made by me and my family in Thailand. I am also glad that the black telephone was a success and people responded to it in very interesting ways. My only regret was that I was unable to place the phones in their “ideal” environment–a small, quiet room where people can listen to and record audio without any disruptions.

Each phone was made with an Arduino Uno and a VS1053 Breakout Board from Adafruit.

Also many thanks to Andre for taking pictures at the exhibition. :) 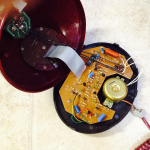 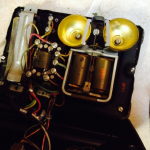 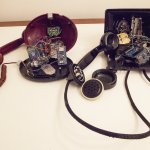 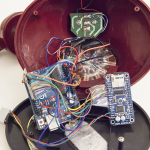 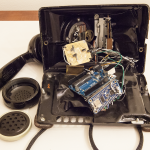 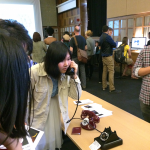 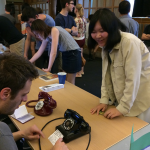 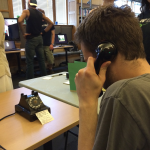