This isnt an art project or installation, but rather a machine that has been created to aid in surgical environments. Users control the robotic arms through 3-axis control station, and are able to complete different tasks in a surgical setting. I had the opportunity last night to test out this system with blocks at the S.T.A.R. Center for my Medical Devices class. It was hard to understand the depth perception of the arms. I also received no feedback as to the location of the robot arms in respect to the camera or table the blocks were sitting upon. Without depth feedback and spacial feedback it was hard to maneuver the arms to prevent them from hitting obstacles at times, but utilizing the controls was very simple. Almost too easy that I wonder the responsiveness when performing a surgery. Future systems should better integrate feedback into the system, without it we are running blind and depending upon shadows to now where the arms are located.

Powered By You from Proteus Digital Health on Vimeo.

An ingestible and patch created by Proteus Digital Health that detects heart rate, activity and sleep. The ingestible is powered by stomach fluid, and transmits data to the patch worn on the arm. The patch receives the physiological data and sends it to your mobile device. The ingestible is made up of ingredients found in food, all which can be ingested. There isnt much detail about the technical specs of this device, and other than the ingestible component and energy source of stomach fluid, detecting heart rate, activity and sleep is no different than what Fitbits, Jawbones and other fitness wearable devices already do. This device has alot of potential but it is limiting itself to a scope that is already heavily populated.

For my final project I hope to make a novel interactive game. My reasoning for this is that I started programming and drawing because of my interest in games. My hope is to design something abstract, aesthetically pleasing, and with focus on interaction.

Martin ‘grapefrukt‘ Jonasson (Grapefrukt Games), made a game with crisp graphics, solid gameplay, and a consistent design. In the game you work to expand a base while also building up an army of minions to defend it. It is also necessary to generate energy

I like it because it uses very simplistic shapes to create motions which are all very much related to the gameplay. There is subtle motion that floating objects take that draw the player’s attention without distracting.

I also enjoy the gameplay (as is illustrated), because I enjoy the RTS genre whenever I play. I like this game because it abstracts everything away from the setting of building a civilization and hold to the elements.

Stefano D’Alessio and Martina Menegon, created an interactive installation that draws users in with abstract symbolic representations of the body.

I enjoy this piece because of the simplistic design, in both visuals and technologies incorporated. For it to be so simply designed and to evokes such strong reactions from users, impresses me. I also like the smoothness of the animations, especially from the glob of squiggles into the stick figure.

As I was looking for nodeJS examples to get some inspiration for my bot I came across this amazing nodeJS soccer game. I thought it was a very nice way of using simple shapes and gestures to play a multiplayer game online. I also liked that it is all online in javascript and html. it makes it more assessable to other and I think inter actives are going to start moving all towards the web given that it is growing in strength! Here is the well documented blog the creator Gabriel did: https://gabrielmfadt.wordpress.com/tag/soccer/

For my final project I am thinking on doing something in relation with projection mapping. I have always water to and I am thinking on taking this opportunity to finally do it. With this in mind I found this mind blowing experience. I love the idea of using a real object in the canvas as part of the story the projection mapping is telling. It makes it look SOO real!!! I really got inspired by using real objects in the scene to create something. How the light interacts with the object is different, more crisp, i just loved it!

One of the ideas I’m interested in pursuing for my final project is bot vs. bot entertainment.  I built an IRC bot to scrape Twitch chat (for the data scraping assignment) and am able to write back to the chat as well, but my friend had an idea that I thought was brilliant. In his words, “The real coup de grace is if they were chatting about bots playing each other.” Turns out this is definitely doable, and I’d like to have a Twitch stream that streams 5v5 bot DotA matches, with bots commenting asinine things as spectators. 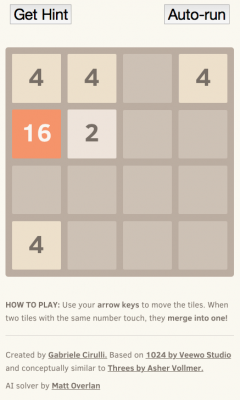 This isn’t an art piece, per se, but I thought it would be interesting to look at it from an entertainment point of view.  The 2048 AI Solver is exactly what it sounds like: a playable version of 2048 that also includes an AI to either provide a hint or to run automatically until it gets to 2048.

I’ll admit it: I never beat 2048. I was always too lazy to consider my moves and tried to “feel out” my swipes in a half-random fashion. Watching the computer play with a decided strategy was enlightening and mesmerizing. I don’t think it’s repeatedly entertaining, but there’s a certain beauty to watching the computer solve a problem that I never was able to grasp.

For what it is, it’s completely perfect. For what it’s not (an art project), it is lacking. What I would enjoy seeing is a head to head competition of two separate AI’s, perhaps presenting the code or algorithm behind each one and asking the observer to guess which one will solve the puzzle faster. 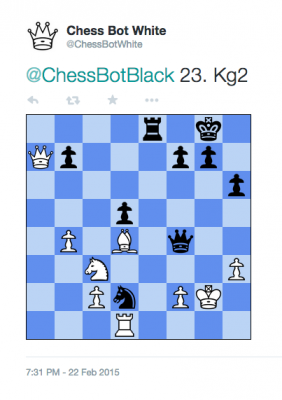 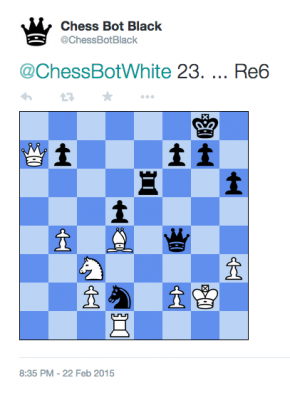 @ChessBotWhite and @ChessBotBlack are two twitter bots by Aaron Marriner that play chess against each other.  It looks like each bot makes a move roughly every other hour, posting the algebraic notation for the move and the resulting board to twitter.

In this case, no, we cannot infer that the game is at a high level as we don’t have a point of reference to human ability.  That’s alright though, since what actually might be more interesting are the places where the bot goes off the rails and makes a mistake. Called out mistakes would give a sense of drama. I’d also like to see a running tally of which bot is up more games, or anything to make it feel a little less automatic and a little more human.

This project likely has its roots outside of the art world, going back to IBM’s Deep Blue, though chess AI has worked its way deeply into chess culture. A related work is @PlayLightsOut, another game playing twitter bot, albeit one that plays in response to human tweets rather than  against another AI.

This is a chart of visualizing where words appear in different Jane Austen novels. I like the wide overview they give of the entire novel, and I like how the different words, when chosen correctly, tell the viewer something interesting about the structure of the book. I think the project could be improved a lot. This is the start of a great visualization, but it needs more layers of interaction and data to make the experience richer. My first thought it to let the viewer zoom into different paragraphs to see each block, but I think rearranging the text blocks according to different properties would be enlightening too.

I want to highlight this project because of its gorgeous print design. It’s an undergraduate thesis visualizing the hidden connections in Shakespeare. From the project website:

As a result, and based on data from the WordHoard project of the Northwestern University, an application of computational tools was explored in order to extract and visualize the information found within the text and to reveal its underlying narrative algorithm. The five approaches presented here are the first step towards a dicussion of this potentionally new form of reading in an attempt to regain interest in the literary and cultural heritage of Shakespeare’s works among a general audience.

The project is doing interesting transformations of text, then delivering it as a book. I like the return to printed form that hints at a reimagining of what reading could be if infoviz were inserted into books. The designer also made a series of interactive processing applications. I wish I could have seen those.