So instead, I’ll describe two projects on Information Visualization that I find interesting:

From information sourced from WikiLeaks, this project shows all the recorded happenings in Afghanistan and Iraq since the United States has put a military presence in the areas.  Small icons are placed side by side from left to right by day and up and down by month, and there is a picture associated with every kind of event:  an airplane for an air mission, handcuffs for detainee operations, picket signs for protests, et cetera.  With over 463,000 recorded events, there truly are a lot of symbols, completely covering walls spanning an entire room.  It really makes me think of Egyptian hieroglyphics covering burial chambers for pharaohs, with the user walking around in awe of the recorded history.  This really impresses me further because this is a student project who had the initiative to launch a successful Kickstarter project to gain the funds he needed to make this project a reality.  If this project was to be preserved for thousands of years, I wonder whether future generations would be able to dig this up and decipher the history of this conflict. 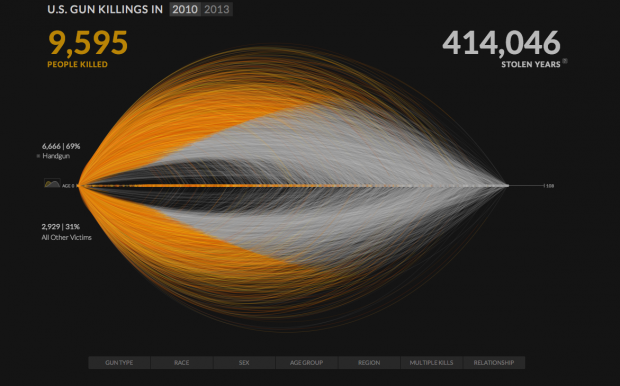 This is a infographic detailing all the recorded gun deaths in the United States during the years 2010 and 2013.  Every individual arc represents a single life, where the orange parts show the time of life actually lived before being halted by a firearm, and the grey parts show the length of life that could have been lived.  In addition, this project goes into further detail by allowing the user to set parameters on the circumstances of the death, such as firearm type, age, race, and gender of the victim.  This project demonstrates a powerful message about the level of gun violence that continues to exist in the United States.  I think the strongest aspects of this piece are the numbers on the top left and right corners being transposed with the curves – it may be hard to grasp the sheer magnitude of the death count as a flat number, but the density of the curves shows it all.