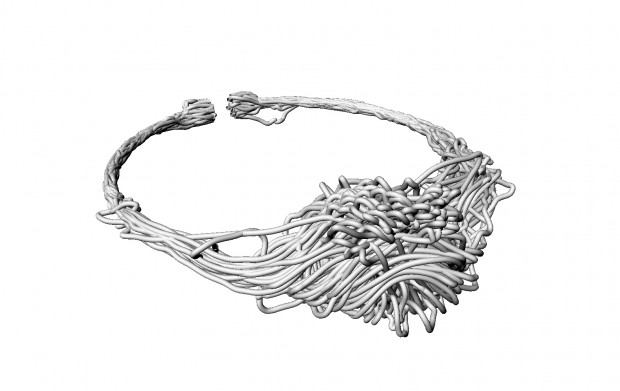 Alex Fischer is a Computation Design student who is developing an agent based modeling plugin for Grasshopper. He asked me to test an early version of the plugin to get an idea of how it can be used; I decided this project is a great opportunity to do it. I tried to make a necklace designed by two flocking systems trapped in the bounds of a shape that the user can parametrically set. The user can also set the behaviors of the agents in the flock, so they have a level of attraction, alignment, and repellent to their own flock systems, as well as complete avoidance of other systems. This project and the gif were the most fun.

Failures doing this project were, like the gif project, due to incompleteness of the library, but the limitations made it even more interesting to me. With low-level rules a great complexity is still visible.

I know these SHOULD print, because the person who wrote the script had printed out some test models that were output in the same manner as mine were. However this is yet to be tested later today.