This map is called Smelly maps of London and Barcelona, created by Schifanella Rossano. He attempted to overturn the conventional perspective towards odor in urban areas, which are usually negative, to a positive appreciation for “smellscape”.

In order to measure and categorize smell at scale, he collected words that relate to smell in literature, terms used in tags from Flickr’s geo-referenced photos, and classified which term was associated with a particular smell category. After the classification, the geo data from the Flickr photos were plotted matching them with the street segment geometry from OpenStreetMap data.

There are more beautiful maps that relate to senses here made by Kate Mclean. Among the scentscapes that Kate created, I was particularly mesmerized by her scentscape of Singamore. 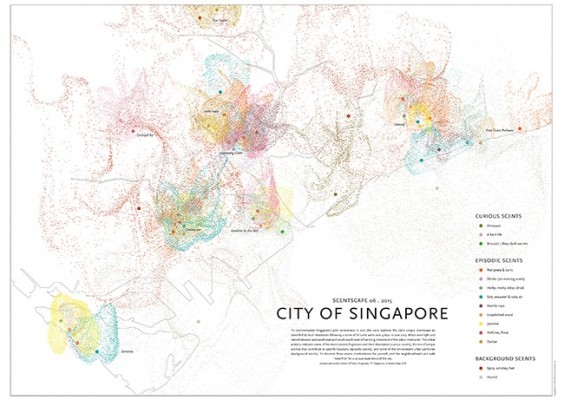 Kate’s data collection method is quite different from Schifanella’s. In addition to her personal smellwalk, 200 volunteers also participated through web registration for desired walk destination. Eight neighborhoods were selected by locals as a representation that effectively reflect the multi-culture of the city. During each walk, the most commonly mentioned scent was selected to represent the neighborhood. The rings of dots reveal the intensity and the average duration of the smell. The color scheme was based on the participant choices for each of the neighborhoods.

Kate’s scentscape is successful in that it was able to provide a more general information about the ambience of the neighborhood and also in that it was able to deliver more complex data on smell (intensity, duration, more categories). Unlike Schifanella’s the data collection method might seem more intuitive and sensible.