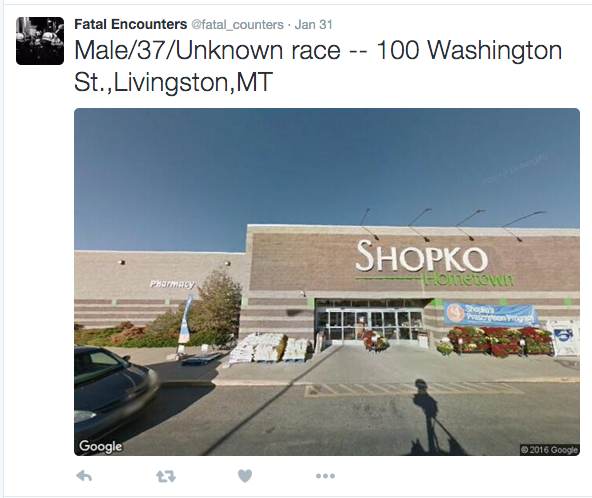 Description
For my twitter bot I decided to take the police homicide data collected by various news sources (The Guardian, Washington Post) and hosted on an online site called Fatal Encounters and actually try to visualize those numbers and stories in some way. As numbers, tags, and names, the data quickly overloads you. There are more than 10,000 deaths on the database since 2,000! I wondered how I could make the data just a little more visceral and was actually curious to dig into some of the stories and descriptions of the victims’ deaths.

Each entry was associated to an address where a homicide allegedly took place. I geocoded the addresses using the Google Maps API and used the latitude and longitude data to download a Street View image of the location. These images represent (as far as we know, given the accuracy of the data) the actual place where a police confrontation led to a civilian death. My bot then posted the age, gender, race, location, and Street View image of a each homicide. 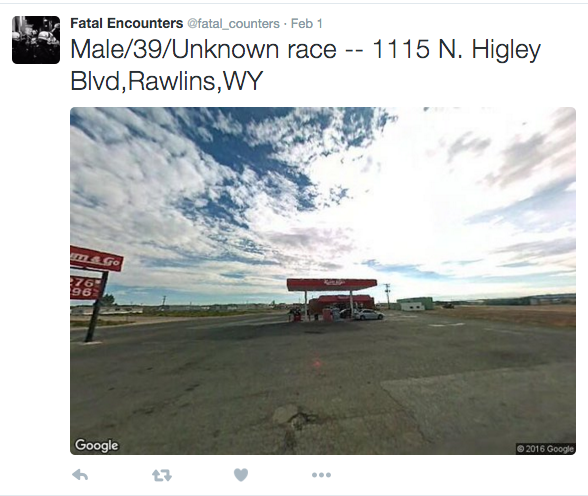 What surprised me was how boring and mundane a lot of these places looked. Suburban neighborhoods. Remote, lonely roads. The images themselves looked lifeless, which was sort of unexpectedly appropriate.

This is definitely a feed and image bot according to Cook’s taxonomies. It tweets every 4 hours and simply goes down a spreadsheet looking for death entries. I suppose it does fail in providing more context about each particular death. Not much you can do in 140 characters to tell the story behind a death – even though that was my original intent. There might be ways to expand the work and instead of posting race, age, gender type information simply post the details of each person’s death. Description are more vivid than data.

Improvements
I’ve made some improvements but not pushed them up to my EC2 instance. I expanded the field of view of some of the images to get a wider look at the scenes of the crime. The smaller images just didn’t seem to cut it, they were too small. I’ve also changed the text a bit to make the tags more comprehensible and less symbol-heavy. 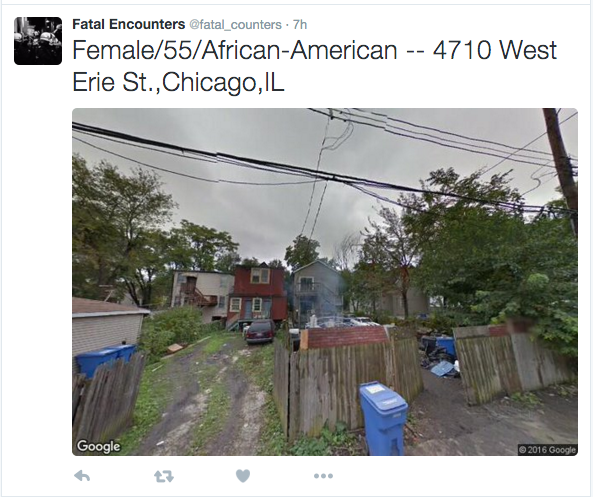 Here is a link to the github code: https://github.com/irealva/twitter-bot-police-deaths