I struggled a bit with finding something to make — I kept trying to think of something deep, or how I could make an artists statement, but couldn’t really settle on something.  So I decided to do the complete opposite:  make cupcakes.  I wanted to play with fun colors and images, and cupcakes seemed to hit that spot.   I created a database of food names, flavors, and spices, and randomly chose them for different things like cake flavor, frosting, and toppings.  I then used processing to draw a cupcake with a randomly chosen colors.

The bot is fairly straightforward, so I didn’t receive many surprises, but I was actually pretty surprised at how well it seemed to work.  More than I expected of the cupcakes turned out to look like what was described, even though the colors and flavors were not directly correlated in code.  I thought it was really interesting how our brains tend to try to compensate for the image not necessarily matching the words.  For example, the “red velvet” cupcake above is more orange than red, but I still think “oh its a red velvet cupcake”.

Unfortunately, my bot was too young to really get much of a following, so I haven’t gotten any sharing.

My bot, of course is an imagebot, and falls into the feed category.  It simply pops out different combinations and images.  However, I think it’s a fun bot to follow.  It outputs friendly, colorful images, and surprises followers with either weird or delicious sounding cupcakes.  I think this could either inspire people to recreate a random idea or just put a smile on someones face.  In the future, I’d like to add more detail to the cupcakes (sprinkles, etc. ) and link flavors and colors.

some other funny ones: 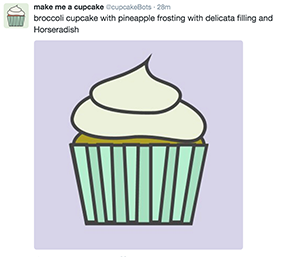 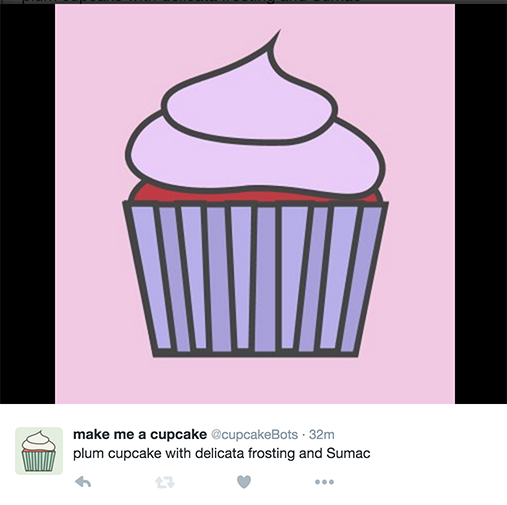